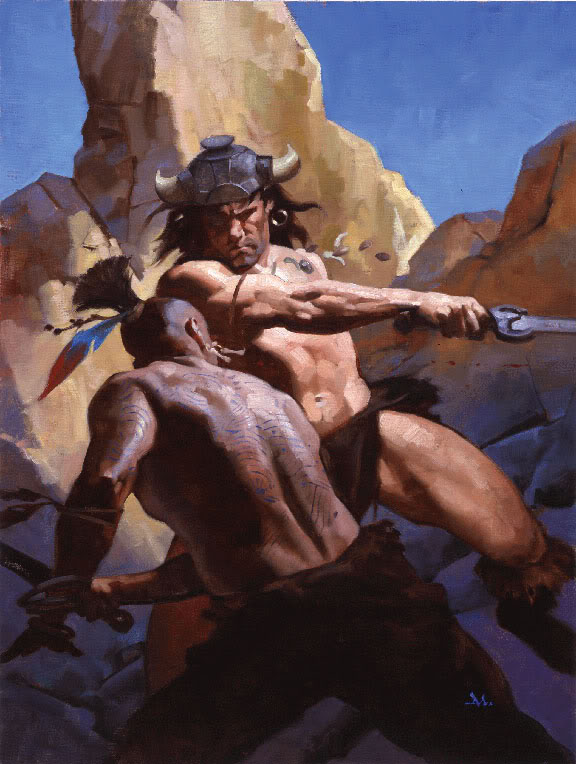 From “Beyond the Black River,” by Gregory Manchess

I have a curious relationship with Fantasy as a genre.

I’ve never read much of it — generally preferring straight historical adventure or history — but what little I’ve read has had a profound effect on me.  Like many others of my generation, I read “The Lord of the Rings” once a year every year for many years. And Robert E. Howard is the tale-spinner who first made me say to myself “I want to do THAT!” For better or worse, REH sent a 13-year-old boy down the path that led to this incessant keyboard pecking, this compulsion to make my way and my living through song and story.

In both Tolkien and Howard, I found stories and characters that resonated with my fascination with Wilderness and the men who roam there.

I still remember the sense of frisson I experienced when I read this passage in The Lord of the Rings (Book I, Chapter 9, “At the Sign of the Prancing Pony”):

“Suddenly Frodo noticed that a strange-looking weather-beaten man, sitting in the shadows near the wall, was also listening intently to the hobbit-talk. He had a tall tankard in front of him, and was smoking a long-stemmed pipe curiously carved. His legs were stretched out before him, showing high boots of supple leather that fitted him well, but had seen much wear and were now caked with mud. A travel-stained cloak of heavy dark-green cloth was drawn close about him, and in spite of the heat of the room he wore a hood that overshadowed his face; but the gleam of his eyes could be seen as he watched the hobbits… As Frodo drew near he threw back his hood, showing a shaggy head of dark hair flecked with grey, and in a pale stern face a pair of keen grey eyes.”

I knew who he was. This man, Strider, was a Frontiersman. 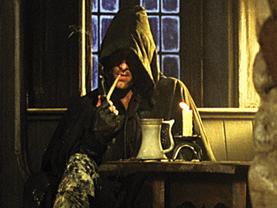 “…In the wild lands beyond Bree there were mysterious wanderers. The Bree-folk called them Rangers, and knew nothing of their origin. They were taller and darker than the Men of Bree and were believed to have strange powers of sight and hearing, and to understand the languages of beasts and birds.”

By God, these were the same men who stalked the forests around Fort Pitt or penetrated Comancheria to pursue fearsome raiders and protect the small folk of from “foes that would freeze their heart or lay their little town in ruin if it were not guarded ceaselessly.”

Says Robert E. Howard scholar and my former comrade on the shieldwall at The Cimmerian, Al Harron:

“…the mysterious, ancient people (The Dunedain) assisting a younger populace against the dangerous of the untamed land despite being looked down upon reminds me a little of Natty Bumppo.”

Le Loup, historical trekker and keeper of the excellent Woodsrunners Diary Web site, traces the origins of the Ranger from medieval England to the American colonies:

“The Ranger occupation goes all the way to the late medieval period. There is little doubt in my mind that Tolkien based his Rangers (Strider) on these early English Rangers. Searching for these Forest Rangers brings up other terms such as Verderers and Foresters, and although these people did patrol the forests and protect the game, they were not actually mentioned as Rangers until much later on.
The Ranger’s job was to patrol the forests and to look for trespassers and poachers, but also apparently his job was to protect the forest inhabitants, to discourage robbers etc from raiding woodland dwellings and hamlets. This is exactly what Aragorn did in Lord Of The Rings, and this occupation extends right into the New World and the 18th century.
Rangers were hired to patrol the countryside looking for any enemy and raiding parties of Indians or French and Indians. These were individuals who were expected to warn the settlers and townspeople in advance, and to cause as much damage to these enemy as was practically possible.
Later these Rangers were formed into groups or band and eventually became formal units such as Rogers Rangers.”

The first Robert E. Howard Conan story I discovered was “Beyond the Black River.” ( I must digress for a moment and make this note: If you only know Conan of Cimmeria through movies or other media, you should track down Howard’s original stories and accept no substitutes. The real deal, 100 proof Conan is something entirely separate and different from … that other thing).

Anyway, I read “Beyond the Black River” about a year after I first read LOTR and again experienced that frisson as Howard described the men who had settled on the Pictish frontier:

“They were of a new breed growing up in the world on the raw edge of the frontier — men whom grim necessity had taught woodcraft. Aquilonians of the western provinces to a man, they had many points in common. They dressed alike — in buckskin boots, leathern breeks and deerskin shirts, with broad girdles that held axes and short swords; and they were all gaunt and scarred and hard-eyed; sinewy and taciturn.”

Howard was a Texan and obsessed with the history of the dark and bloody ground of his homeland. He had also read much of the work of Robert W. Chambers and Joseph A. Altsheler, who wrote extensively of the early colonial frontier. In “Beyond the Black River,” Howard translated the American frontier into a fantasy setting, which allowed him the liberty to take themes that have resonated through American history and literature in a strange and dark direction.

The late Steve Tompkins wrote that,

“‘Black River’ is extraordinarily compelling precisely because it is so at odds with American history. No shining city on a hill will be built in the primordial Pictish Wilderness. The Picts will not lie down in front of the bulldozer of Hyborian Manifest Destiny but instead hijack the vehicle and put it in reverse…”

Tompkins argues ardently for a reading of Howard’s Pictish Wilderness tales that puts him squarely in a tradition that runs from Hawthorne to Melville, Cooper to McCarthy:

“Nothing else in modern heroic fantasy borders so closely upon classic American literature, and if the Black River of genre classification can be crossed, if bias and snobbery fall like Fort Tuscelan and Valenso’s stockade, these stories will take their rightful place.”

For his part, Harron makes the case that the power of fantasy to universalize a tale makes “Beyond the Black River” applicable well beyond the American frontier:

“(The tale) is frequently seen as an allusion to the Colonial period of American history, and given Howard’s love of that period in history and the very evocative milieu of “Beyond the Black River,” it’s easy to see why. However, that’s not to say that the story is only about the plight of American settlers, Manifest Destiny, colonists-and-injuns, and other such tropes of Western literature: it could also be applied to the heaving Roman Empire’s expansion into dark Germanic territory, or Spain’s conquest of Mexico, or even the Vikings’ struggles with the Skrælings. ‘Beyond the Black River’ is more universal, and deeper, than a mere ‘Conan of the Mohicans’ escapade.”

Harron is quite right, of course — that ability to universalize a tale is one of the great gifts of quality fantastic fiction. However, given my proclivities, I am entirely satisfied to read “Beyond the Black River” as a tale from the American frontier. For me, Conan found his real-life counterparts in Simon Kenton, Sam Brady, even the dark figure of Lewis Wetzel. Howard would have included the Texan Big Foot Wallace.

Tolkien once wrote, “I much prefer history, true or feigned…” For me, his legendarium and Howard’s forever evoke images of forbidding forests and grim, weathered, taciturn men ranging them — stealthy protectors of those who would live free from fear of foes that would freeze their hearts…

Dunedain — Rangers of the North by Justin Sweet.