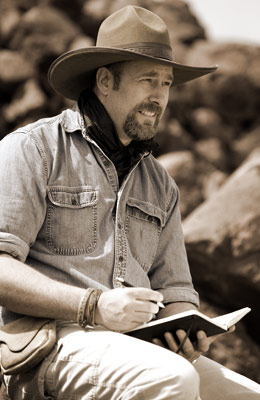 His older brother gave him a tattered copy of Allan W. Eckert’s The Frontiersmen, a biography of Simon Kenton, and the twig was bent.

Graduated from the University of California, Santa Cruz, Jim received honors in History even though he primarily focused on a self-directed course in woods running.

He now resides on the high desert of Central Oregon, where he makes his living with his pen. A musician and a songwriter, he also remains a woods runner dreaming of distant frontiers. he is the keeper of the blog Frontier Partisans.com and the author of the book Warriors of the Wildlands: True Tales of the Frontier Partisans.