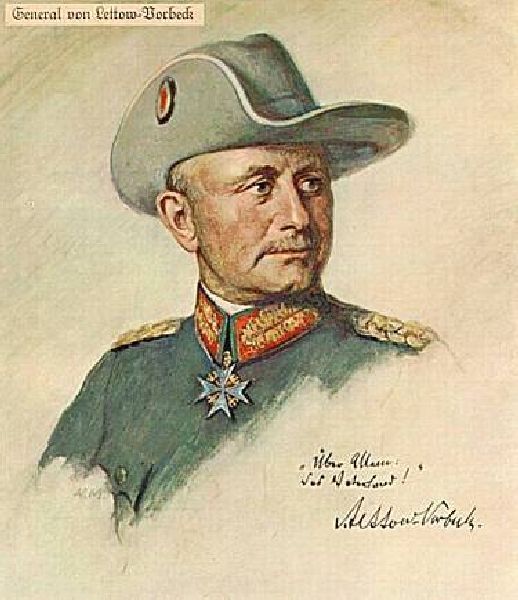 Three of the 12 chapters in Warriors of the Wildlands touch on the Great War campaign in East Africa. Deneys Reitz fought there under his mentor Jan Smuts, and P.J. Pretorius served as Chief of Scouts for the British forces. Frederick Courteney Selous met his end there, killed by a German sniper. This “sideshow” campaign was grueling frontier partisan warfare writ large, and it gave rise to a legendary warrior: Col. (later General) Paul von Lettow-Vorbeck. The German commander led an astonishing campaign of guerrilla warfare, managing to keep his force intact and in the field against mounting odds till well past the Armistice that ended the war.

Lettow was a hero in post-war Germany. He became involved in right-wing efforts to undermine the Weimar Republic, but he never got along with the Nazis. He reportedly actually told Hitler to fuck himself, which I’d like to believe is true.

The Great War channel on Youtube offers several quick video primers on the campaign that will get you oriented — and doubtless whet your appetite to learn more (which you can start — shameless plug alert! — by reading WoW).