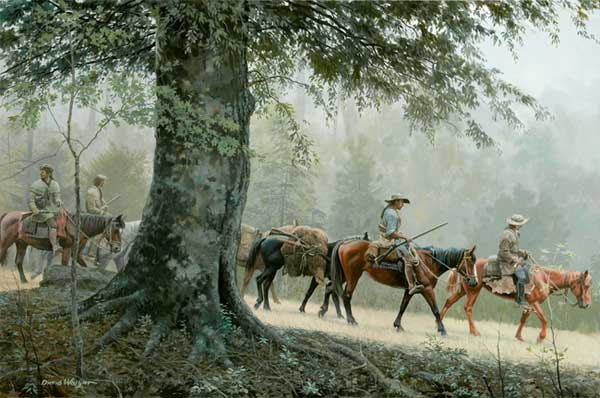 Long Hunters set out for the Middle Ground in the "Cold Gray Fog of Dawn." David Wright www.davidwrightart.com 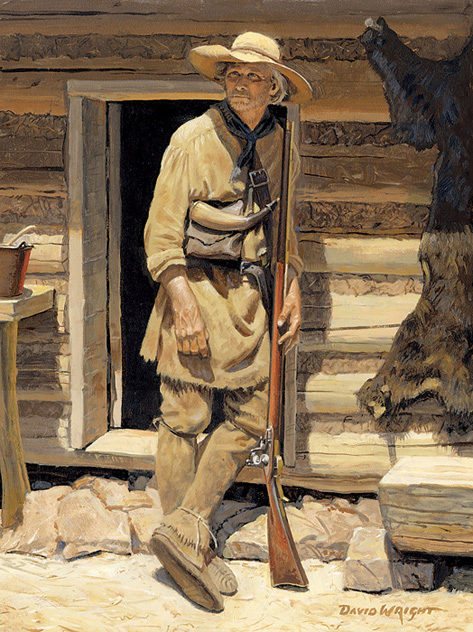 Few figures in history are more romanticized than the hunter-explorer. Whether its Long Hunters infiltrating the Appalchian barrier to explore the verdant bluegrass of Kaintuckee or the Mountain Men pushing into the Rocky Mountains in a restless quest for beaver pelts or the African hunter leading a safari into the interior after ivory, there’s something innately compelling about the men who made their living by trap and rifle.

The romantic haze that surrounds their exploits disguises the fact that in all cases, they were involved in a crassly commercial endeavor — and a somewhat sordid one, at that.

This was the skin trade, after all. Kill the animal, whether it be deer, beaver or buffalo and take its hide, leaving the rest. In the case of the African hunters, the prize was tusks of ivory. Use of the meat was mostly incidental. (The buffalo hunters of the late-19th Century perhaps seem less romantic to us because the slaughter was so grotesquely quick, thorough and ugly. Even so, the likes of Billy Dixon could give any other frontiersman a run for his money).

In his excellent study “The Hunters of Kentucky,” Ted Franklin Belue notes that:

“At Fort Pitt (Colony of Pennsylvania) in 1767, commissary Alexander McKee received 178,613 ‘Fall Skins’ and 104,016 ‘Summer Skins” — figures typical of the region’s exchange from the 1740s to the 1780s and comparable to the southern trade out of Charleston and New Orleans, proof that Indian and Anglo hid hunters were slaughtering millions of deer in the Mississippi watershed.”

Note that Belue includes Indian hunters. Contrary to fantasies about the ecologically in-tune “Native American,” the tribes of the Old Northwest were deeply enmeshed in the fur and hide trade and, by the 1760s, had been for at least a century.

“A whitetail felled by a .50-caliber long rifle meant another bloated carcass left naked by the trail and marked by spiraling buzzards. Yet, had an arrow or Shawnee bullet felled the deer, its fate would have been the same. In 1773, a Delaware hide hunter slaughtered 30 deer in 17 days; another took 47 bucks in a month. Missionary David Zeisberger estimated a native might shoot 150 deer a year, observing that ‘Delawares use no other than rifle-barrelled guns.’”

The Indian hunters of the Middle Ground were outraged by white Long Hunters killing their deer, but it was not so much an affront to their sense of ecology that pissed them off as it was umbrage at the audacity of poachers taking their deer on their turf.

Yet for all the slaughter, the real impact of the Long Hunters, the African explorers, the Mountain Men, was as harbingers of settled civilization. As Peter Beard noted in his elegiac “End of the Game,” the hunters were like a storm that passed through the country; it is habitat loss that spells doom for the wild game (although it must be said that deer seem to adapt to suburban living remarkably well).

“Virginia’s U.S. Route 58 threads through (Daniel) Boone’s trail through Powell’s Valley. If travelers do not park their cars and get off the pavement and walk, though, they will sense less than a glimmer of what Boone saw and felt there in 1773, when Indians knifed his firstborn son, James. Amid the day’s rush at the old hub of French Lick, a contemporary reconstruction of ‘Fort Nashboro’ is eclipsed by shadows cast by Nashville’s gigantic Coliseum. Sports fans might be startled to learn that Indian and Anglo blood mingled upon their arena’s soil, buffalo and elk and panthers and wolves crisscrossed it into earthen mazes, man and beast sipped freely from the Cumberland River without suffering the ills of heavy metal contamination…”

And therein lies the romantic appeal. No cold-eyed assessment of the harsh and profligate ways of the early hunters can quell the longing many of us feel for a pre-industrial world that, for all its hardships, inequities and brutality, seems somehow cleaner and more authentic than the modern world of concrete and chemicals, microchips and the incessant din of electronic devices.

“… The spirit of the Long Hunters symbolizes something vastly deep and precious in the human psyche: Long Hunters were rugged, self-reliant individualists who were truly free.” — Ted Franklin Belue 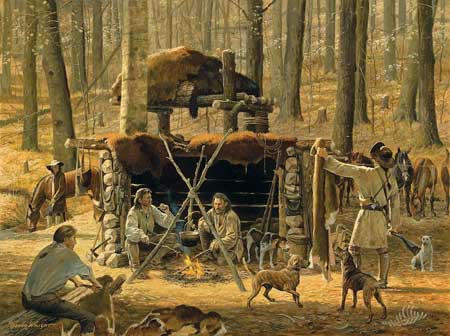 Long Hunters set up "The Station Camp" as a base of operations. A raid on the station camp could spell ruination for a hunter. David Wright www.davidwrightart.com