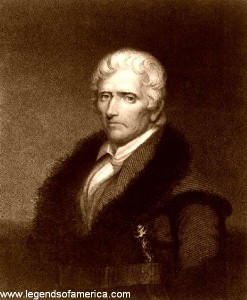 Over the years, I have neglected Daniel Boone.

When I was a youngster he was my hero. The architecture of his saga became a kind of foundation myth for me: The youth who preferred the forest to the school house; the teamster with Braddock’s Campaign, his imagination fired by campfire tales of fabled Kain-tu-kee; the Long Hunter; the settler of Kentucky; the captive of the Shawnee; the defender of Boonesborough (I must have reenacted that episode a thousand times in childhood play); the pioneer swindled by civilized slickers; the old man who moved west again, to Missouri, in search of more elbow room.

Then, when I was 13 or 14 years old, my brother gave me his copy of Allan W. Eckert’s “The Frontiersmen,” and I discovered Simon Kenton. For an adolescent boy, Kenton was the most appealing of heroes: A teenager himself when he came into the Middle Ground; a scout and a ranger and a warrior. To my bloodthirsty young mind he was a real life Conan of Cimmeria and waaaay more badass than ol’ Daniel Boone.

Now, I’m not saying this was a regrettable development. Simon Kenton to this day sits at the head of the table in my personal Valhalla. And my horizons have broadened to other frontiers and other frontier partisans.

But now, in my 40s — Boone’s own age during the fraught years of Kentucky’s early settlement — I find myself with a renewed appreciation of the great Long Hunter. With a middle-aged man’s recognition of the complexities, compromises and contradictions of life, I find Boone becomes again an appealing and compelling figure.

The man was a bundle of paradoxes: A devoted family man who cherished 10 children and a wife of many years, who spent months and sometimes years away from his family; a passionate hunter who preferred solitude and yet found leadership thrust upon him — and he always answered the call of duty. Boone loved the life of the hunter, yet couldn’t help but act as point man for a civilization that would inevitably destroy his paradise. He seems to have been aware of that: in the first Transylvania Company legislative assembly in 1775, he put forward three bills — one for the improvement of horses; one for preservation of the range; and one for preservation of the game, already becoming scarce around the infant settlements.

So Boone is squarely in the great tradition of the hunter-conservationist.

Though he was not a ranger in the class of Kenton or Captain Samuel Brady, and was certainly no Indian killer of the Lewis Wetzel stamp, Boone was an effective frontier partisan. There was good reason that his neighbors looked to him for leadership in crisis. Boone suffered much at the hands of the Shawnee who disputed the conquest of Kentucky. He lost two sons and a brother to raiders and warriors. Yet he never seemed to succumb to the racial hatred and contempt that darkened the souls of so many of his contemporaries.

He was an earthy man with a healthy lust for life — not a plaster saint of triumphalist Victorian era history. He was and remains an easy man to like.

I am currently reading Meridith Mason Brown’s recent biography. It is a real pleasure getting reacquainted with my old friend.