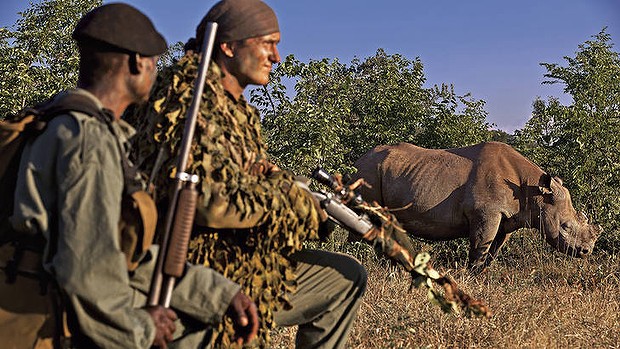 There is a nexus between the war against Islamic terrorists and international anti-poaching efforts.

From an op-ed in today’s L.A. Times by three anti-poaching activists:

If the world needs another reason to get serious about combating elephant poaching, here’s one: The attack by terrorists on Westgate Mall in Nairobi. Income from illegal ivory trafficking is a substantial funding source for the Shabab, the group that claimed responsibility for the attack.

The connection between terrorism and wildlife smuggling is clear. An 18-month undercover investigation conducted by our groups found an indisputable financial trail between the illicit trade in ivory and rhino horns and the Shabab.

Cut off a funding stream for terrorists and save elephants (and rhinos).  Sounds like a good gig. And it looks like some special ops guys are getting in on it.

An Aussie Special Forces Soldier, Damien Mander, at loose ends after service in Iraq, founded the International Anti-Poaching Foundation. From its Web site:

Damien served as a Special Operations Sniper and Clearance Diver in the Australian Defence Force. Whilst deployed in Iraq he Project Managed the Iraq Special Police Training Academy, overseeing training of up to 700 cadets at one time. Following 3 years on the frontlines of the Iraq war he departed in 2008 with no new direction in life. A trip to Africa left him face-to-face with the horrors that the worlds wildlife is facing. Liquidating his personal assets from his time in the military, he founded the International Anti-Poaching Foundation. The organisation focuses on ranger training and operations and integrating modern solutions such as drone technology to conservation.

U.S. Special Operations personnel have trained rangers and participated in anti-poaching efforts in South Africa. I like to think the shade of Frederick Courteney Selous is looking on with great satisfaction.