“The guerrilla fights the war of the flea, and his military enemy suffers the dog’s disadvantages: too much to defend; too small, ubiquitous and agile an enemy to come to grips with.” 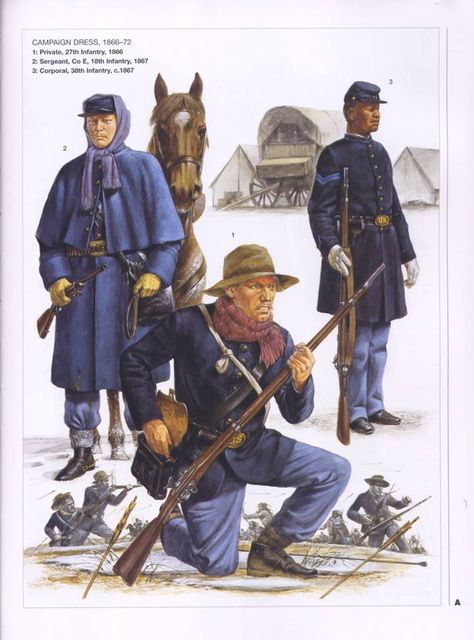 Most of the U.S. Army troops in the Powder River Country in 1866 were infantry.

Through the fall of 1866, the Lakota/Cheyenne/Arapaho insurgents in the Powder River Country made life miserable for the garrison of Fort Phil Kearny. Young raiders made constant attacks on the horse and mule herd, and ran off a good portion of the fort’s cattle herd. Work parties had to travel for miles to fell and haul logs for saw timber, or to mow hay for the dwindling livestock herds, and they were often harassed.

Unwary travelers, like the eccentric Leslies’s Illustrated Newspaper photographer Ridgeway Glover, who insisted on gallivanting about alone and unarmed, got themselves killed. Glover was hacked to death and his head was found 100 yards from his body.

The cemetery at Fort Phil Kearny was continually replenished with fresh graves.

“By mid-December, nearly 70 soldiers and civilians had been killed in over 50 skirmishes practically within view of the post.”

Col. Henry Carrington — focused intently on completion of his fort — did not spend much time on training his troops and made scarcely any effort at all to take offensive action against the harassing tribesmen.

Carrington certainly was not an aggressive commander, but his reluctance to engage cannot simply be laid to timidity. His command was not a crack combat outfit; it was for all intents and purposes a military construction crew. Due to slow supply, he was short of ammunition and short of grain to feed what was left of his stock.

Adding to his anxieties, his wife Margaret and other military dependents had accompanied his force into this deadly war zone under the assurances of no less than General William Tecumseh Sherman that what awaited them was “a pleasant garrison life in the newly opened country, where all would be healthful, with pleasant service and absolute peace.”

It was hardly a circumstance that lent itself to peak military performance. However, it seems that Carrington was at least willing to take a crack at the enemy as winter clamped down.

In November, he finally received a small contingent of cavalry, which increased the garrison’s capability for aggressive patrolling and pursuit of raiders. A company of about 40 miners who had given up on the Montana goldfields bivouacked at the fort. Many of the miners were seasoned frontiersmen, and they were ready and willing to mix it up with the Indians. Another new arrival was a seasoned veteran Civil War combat soldier — Captain William Judd Fetterman. 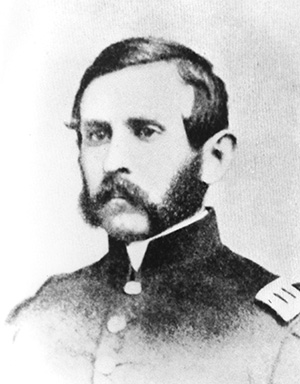 Much has been made of the aggressiveness of Captain Fetterman — maybe too much. For more than a century, he has been regarded as a vainglorious fool who disobeyed a direct order to be cautious in the face of the enemy and led his 80-man command into ambush and slaughter because he couldn’t control his rage for combat and lust for military glory. The fire of history’s judgment incinerates his reputation with a bitter, searing irony, for he had proclaimed:

“Give me 80 men and I’ll ride through the whole Sioux nation!”

Except… It is unlikely that he ever uttered those famous words — and his Civil War military military record shows him to have been an exemplary, disciplined, capable soldier. An aggressive fighting man, certainly, but no hotheaded and no glory-hound.

Shannon Smith reports that in the Civil War:

Fetterman certainly arrived at Fort Phil Kearny eager to take the fight to the enemy — which is what you want in an officer, after all. But a failed nighttime ambush of a band of horse raiders and a couple of sharp skirmishes showed the gallant captain just what he was dealing with. He told Carrington that he had…

“…learned a lesson, and that this Indian war has become a hand-to-hand fight, requiring the utmost caution.”

Not the words of a vainglorious fool.

Lt. Grummond, on the other hand, was a problem. His war record included reprimands for recklessly committing troops without support, which resulted in them getting cut off and mauled by Confederate; violent incidents while drunk, including striking a subordinate; and shooting an unarmed civilian. He had arrived at Fort Phil Kearny with his eight-months-pregnant 19-year-old wife Frances, whom he’d courted in Tennessee during the war — despite already having a wife and two kids in Detroit.

Grummond’s loose cannon nature showed itself with deadly results in a skirmish on December 6 outside Fort Phil Kearny. The lieutenant disobeyed a direct order from Carrington and bolted after some Lakota decoys with four soldiers — straight into an ambush. Two of the soldiers — one a fellow officer — were pulled from their horses and clubbed and slashed to death. Grummond, under hot pursuit, barely made it back to Carrington’s command alive.

While the soldiers who garrisoned Fort Phil Kearny were poorly trained and far more accustomed to wood-cutting, hay-mowing and construction than to combat operations, their warrior antagonists were the product of one of the great martial barbarian cultures of the world.

War was meaning and purpose to the warriors of the northern plains, and they were trained to it from an early age. They were expert horsemen — and expert horse thieves. Stealing an enemy’s horses was sport and vocation all in one exhilarating package.

Battle tactics, like the big buffalo hunts, were carefully planned and Indian forces were more disciplined than stereotypes would have us believe. Leaders did have constant headaches with young, over-eager warriors springing ambushes too soon. However, it must be noted that it wouldn’t be the Oglala or the Cheyenne who would be led into disaster by impetuosity…

The free warriors of the northern plains in the 1860s still relied almost entirely on their traditional weapons — bow, lance, war club. Things would change markedly over the next decade, but during the Bozeman Trail War, firearms were little used by native warriors. 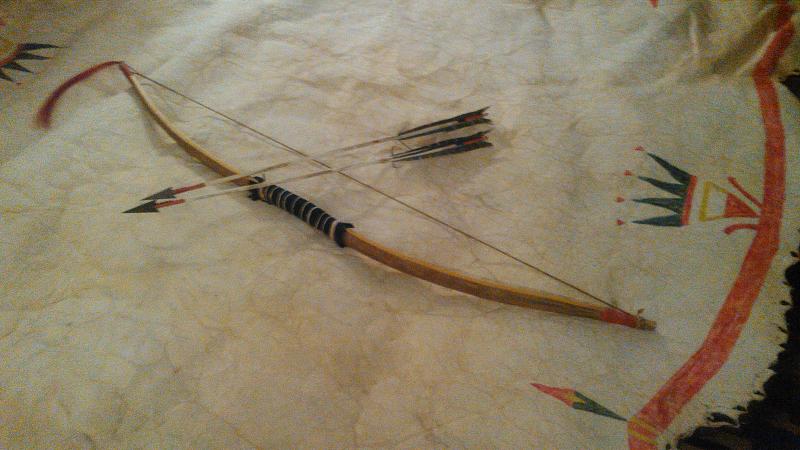 The plains bow was a close-range weapon designed to be wielded in the buffalo hunt and in combat from the back of a horse. A warrior carried plenty of arrows, with arrowheads made out of scrap iron, but otherwise the same as his forefathers for generations back. 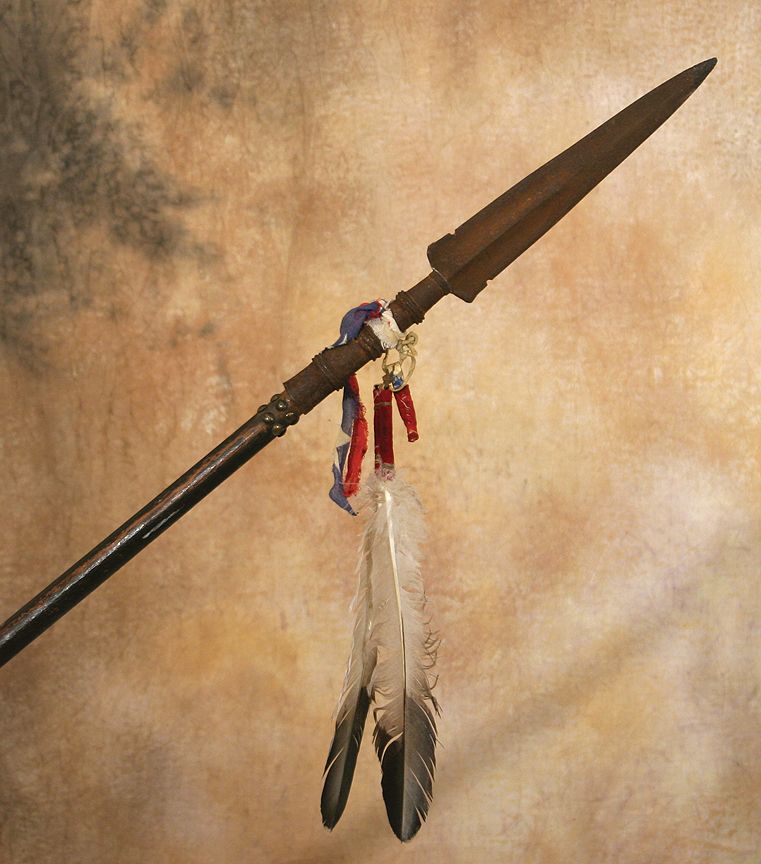 The lance, usually crafted with a head from a knife blade or sometimes a cut-off saber blade, was also wielded from horseback with deadly effect. 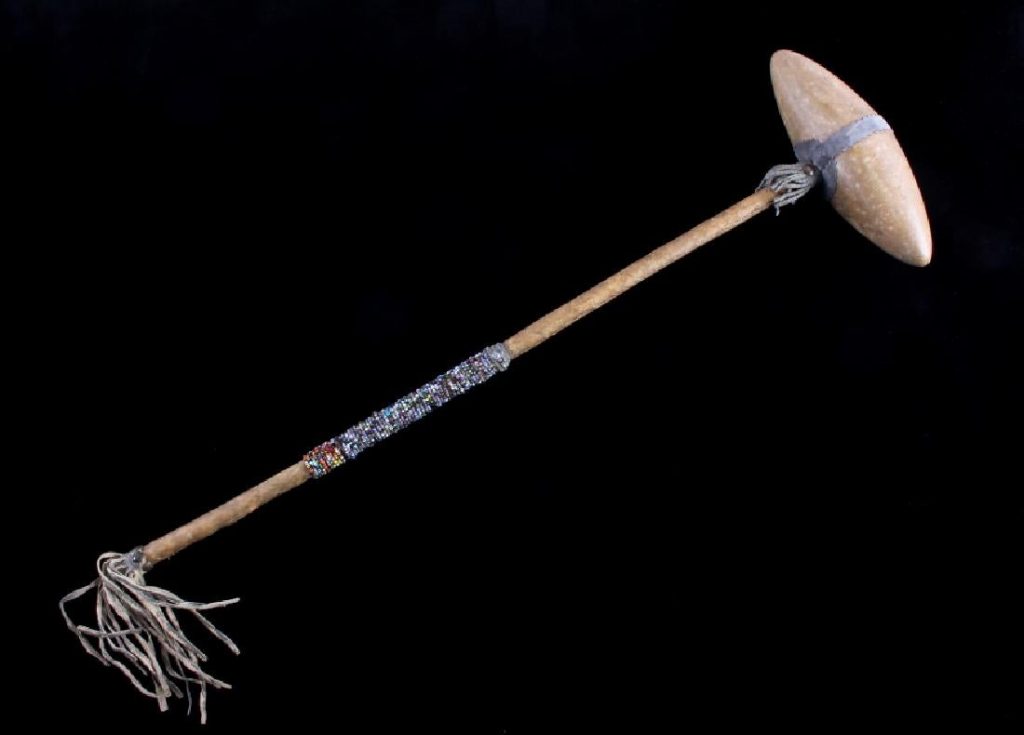 A skull-cracker war club was easily as effective as a steel tomahawk. The long, whippy handle produced devastating head speed and a ferocious blow could be delivered from horseback or on foot.

The gunstock war club was less agile than the skull cracker, but just as vicious.

Native warriors liked revolvers because the handgun suited their close-quarters, rapid-fire style of fighting and could be wielded with one hand. 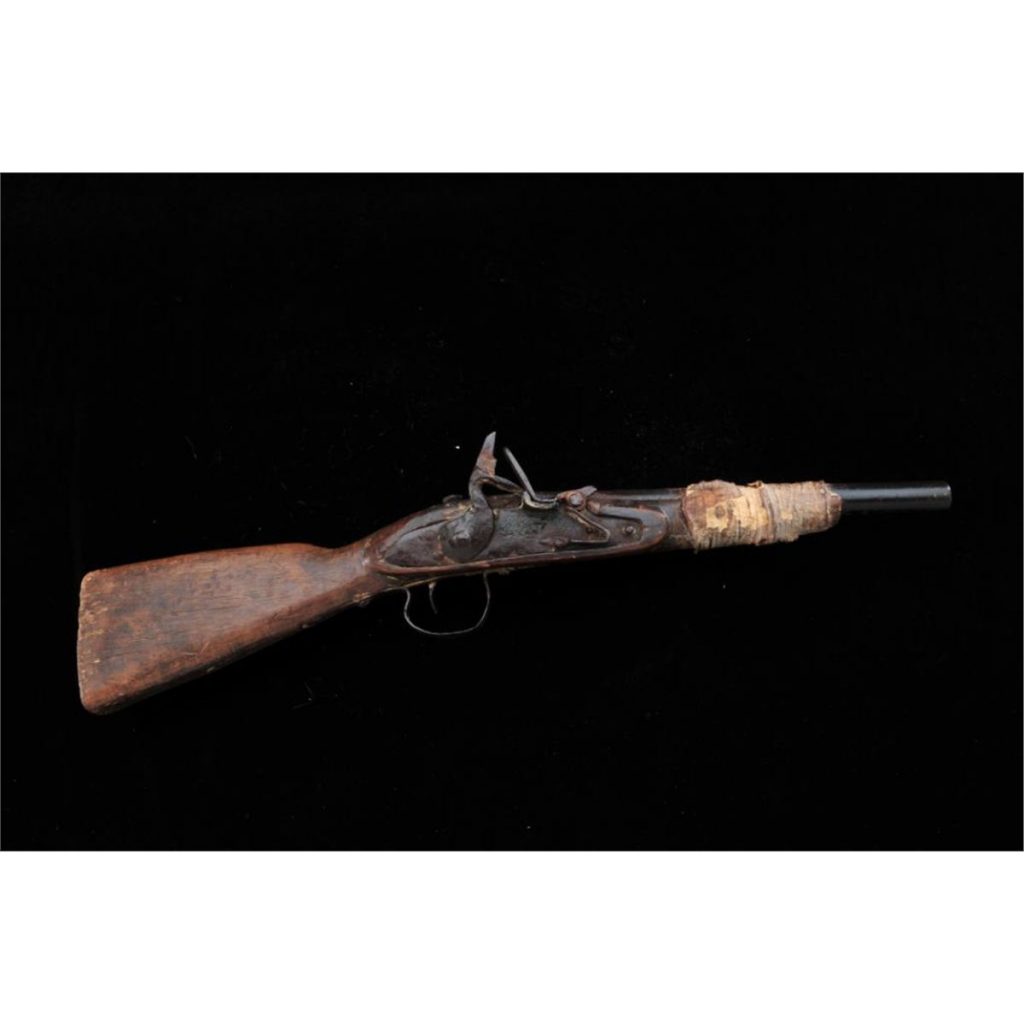 Some accounts have Red Cloud armed with a Hawken Rifle, which is possible and even plausible for such a high-status war leader. But far more common were crudely cut down “blanket guns” that — again — could readily be wielded one-handed from horseback.

The troopers who manned Fort Phil Kearny were theoretically better armed than their enemy, but in practical terms, their arms were not well-suited for the kind of combat they would encounter. 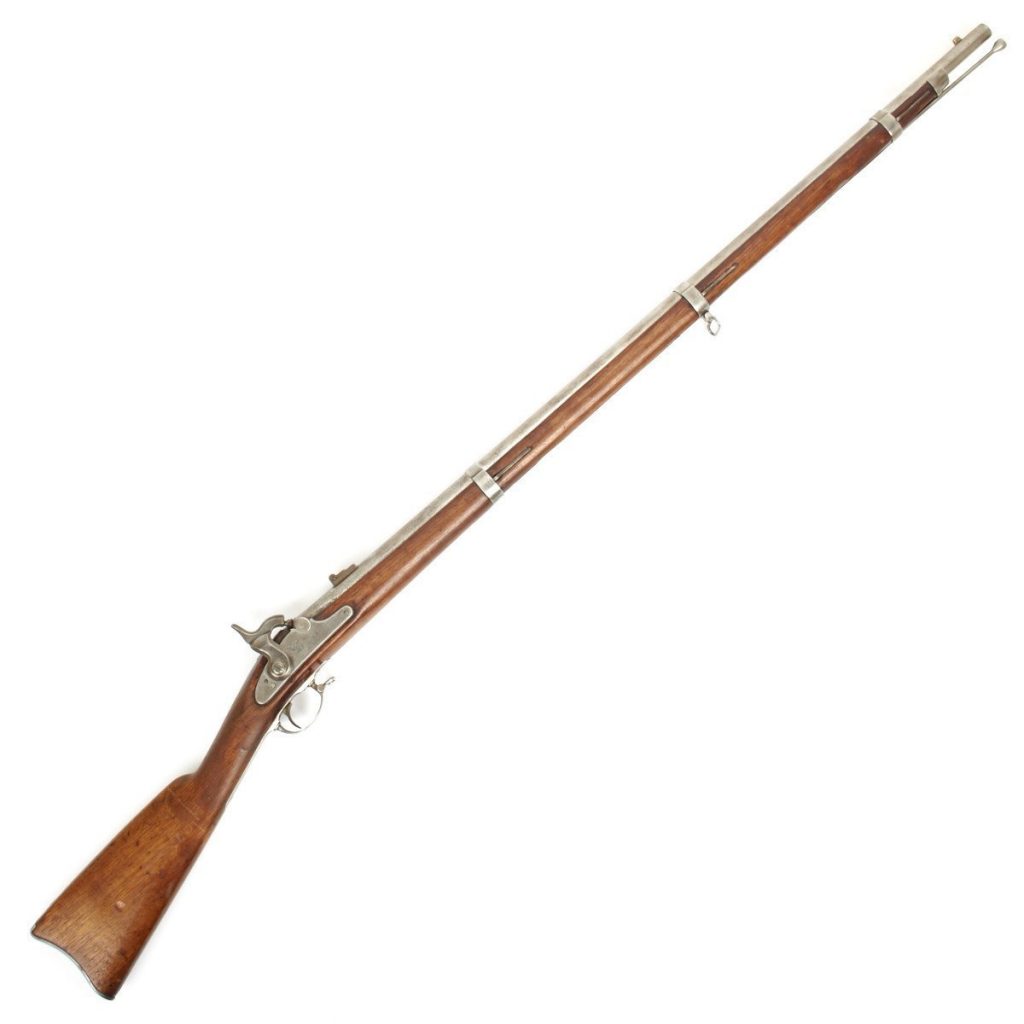 The primary infantry weapon was the Springfield Civil War rifled musket, throwing a .58 caliber conical Minie ball. It was a robust, accurate weapon, but way too long to be wielded effectively on horseback or in hand-to-hand combat — and it was dangerously slow to load.

The Spencer Rifle or carbine was also a Civil War weapon — a stout, effective cartridge-firing repeater. There just wasn’t enough of them on hand. For some reason, Carrington’s beloved regimental band was armed with Spencers, which would be, sensibly enough, requisitioned by the cavalry.

Officers carried sidearms, including the robust cap-and-ball Remington Model 1858. It was best to carry a pair. Like the Steve Earle song says, she shoots as fast as lightning but she loads a mite slow…. 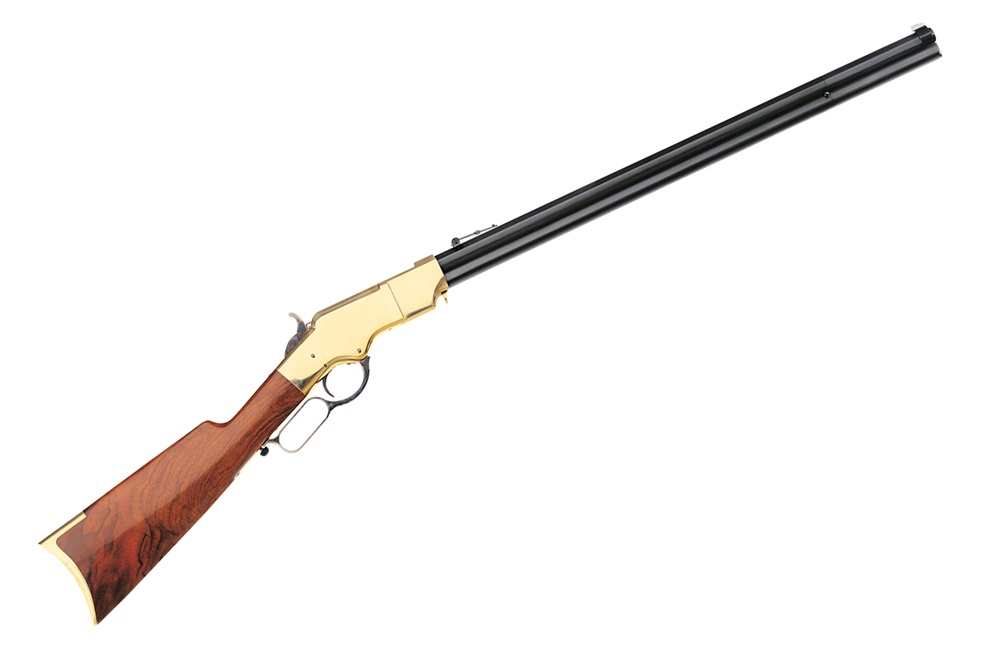 By far the most effective weapon on the high plains battlefield was the Henry Repeating Rifle. No western troops were issued this assault rifle of the 1860s — but savvy frontiersmen made sure they carried one. With 16 shots in .44 caliber, the Henry changed the firepower equation, and in every encounter where it was present, it did significant damage to the foe. Sometimes it was the difference between life and death.

Red Cloud and the other militant leaders of the Lakota/Cheyenne/Arapaho coalition achieved something unprecedented in 1866: Instead of dispersing for the winter into the sheltered, timbered valleys of the Black Hills or the Big Horns, the insurgent force, perhaps as many as 2,000 strong, stayed positioned in the rough, ravine-cut country across Lodge Trail Ridge north of Fort Phil Kearny. On December 21, 1866, that massive Indian army would have a bloody reckoning with the invaders of the Powder River hunting country.