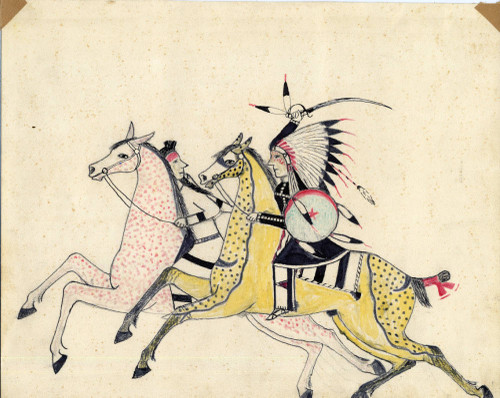 A Crow ledger painting depicting a Lakota — armed incongruously with a saber — smiting a Crow warrior in the epic fight for the Powder River Country in the late 1850s.

Blame it on climate change.

In the mid-19th century, the Little Ice Age receded, and the ecology of the Great Plains began to change. The rich, buffalo-supporting grasslands grew dry and the herds, already disrupted by the mass emigration of American wagon trains, migrated out of their usual haunts.

The Lakota felt the change in their very bones, and they cast their eyes toward a well-watered, ecologically robust pocket of the high plains east of the Big Horn Mountains in what is now north-central Wyoming and southeastern Montana: the Powder River Country.

The country belonged to the Absaroka — the Crow — both by tradition and by treaty. The 1851 Fort Laramie (Horse Creek) Treaty attempted to bring peace to the Great Plains in order to facilitate passage of emigrants along the Oregon Trail. The Treaty defined territories and spheres of influence for each of the great peoples of the region and the Powder River Country and points north and west was Absaroka, the Land of the Crows. 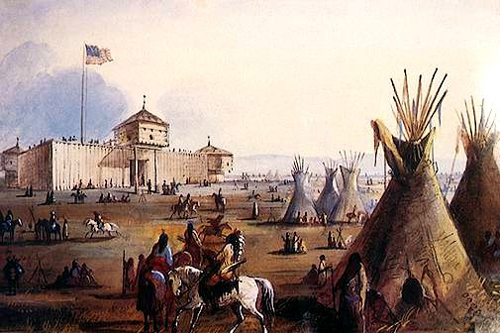 At the same time, the Lakota Sioux were engaged in a burst of imperial expansion, taking on rivals all across the Plains, attacking the Arikara along the Missouri River, the Pawnee in the Central Plains, the Shoshone to the west. In 1856, they turned the full fury of their formidable martial power upon an ancient enemy — the Crow.

This was much, much heavier than the traditional round of horse raiding, woman-stealing and counting of coup. This was not thrilling, dangerous sport. This was a real-deal war of conquest. It was brutal, and conducted on a scale that historians used to find hard to credit in their understanding of native warfare. 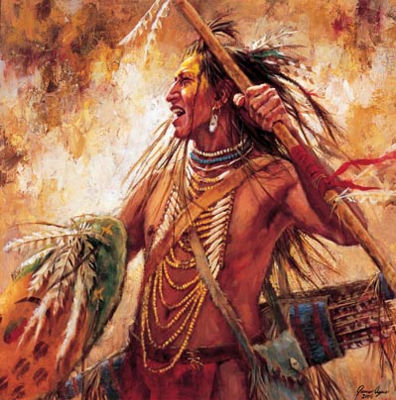 The warriors of the Crow were formidable — but outnumbered by Lakota invaders. Art by James Ayers.

The Crow War of the late 1850s is an epic clash of peoples and it shaped the subsequent events along the Bozeman Trail.

During the 1850s, wagon train migration took its toll on the fragile grasses along the Platte River Road, as well as affecting buffalo migration patterns. With an extended period of drought after circa 1846 at the end of the so-called Little Ice Age, the sustainability of the Platte River ecology and its effects on the Plains Indian economy would become challenged. 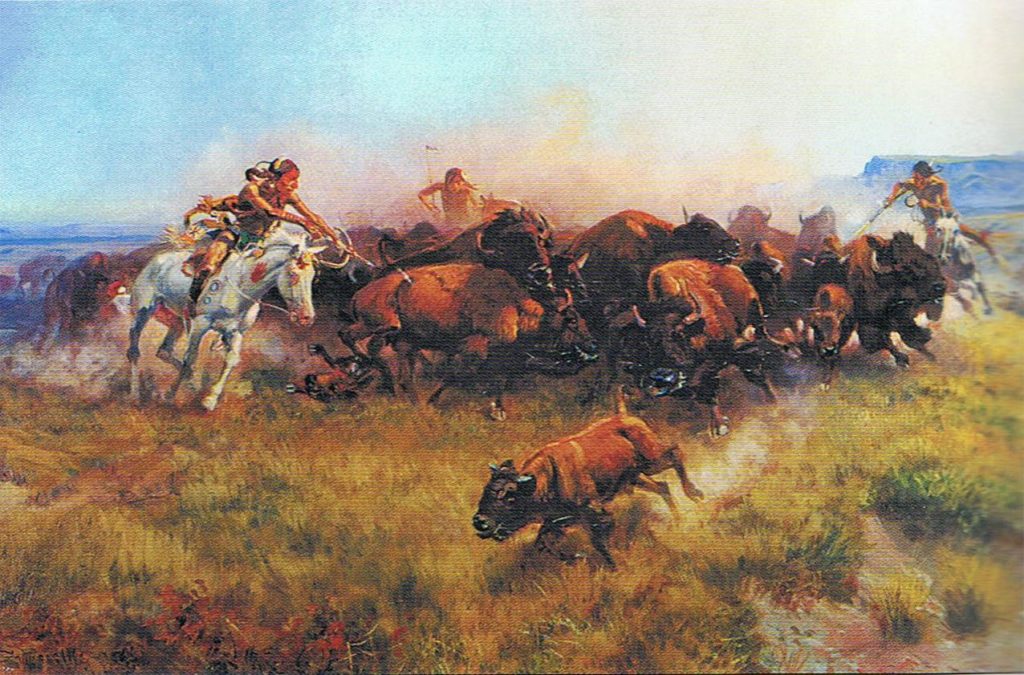 The buffalo hunt was critical to the economy of all the plains tribes and the Powder River Country remained prime buffalo grounds. Art by Charles M. Russell.

A significant clash with another expanding imperial people would also motivate events.

The Lakota had, in the first part of the 19th Century, sometimes fought with trappers who were allied with their rivals in the Rocky Mountains, but they’d never had a serious run-in with U.S. forces. In fact, in the 1820s, they allied themselves with the Americans in substantial fights with the Arikara who were blocking access to the fur country up the Missouri River.

In the mid-1850s, a portentous change occurred. On August 19, 1854, on the Plains east of Fort Laramie. Lt. John Grattan attempted to recover a migrant train’s cow which some Oglala Sioux had lifted. A confrontation ensued. A headman named Conquoring Bear was shot, and the enraged Lakota swarmed Grattan’s command, killing him, an interpreter and 29 soldiers.

Conflict with the U.S. put additional pressure on the Lakota.

Following the punitive military expedition in 1855 under General William S. Harney against the Lakotas for the killing of Lt. John Grattan the previous year, the band of Oglala known as the Smoke People decided to move north to the ecologically viable Powder River Country. There they joined with northern Lakotas and Northern Cheyenne allies, who moved north simultaneously from the Republican and Solomon Valleys in Kansas and Nebraska. They all wrested this coveted hunting ground from their enemies the Crows, whom the United States had recognized as suzerains in this territory by the Horse Creek Treaty of 1851.

The Crow War of 1856-59 became a brutal affair, with two large battles, Captive Hill and Rain (or Rainy) Hill, claiming more lives than any subsequent fights with Americans (emphasis added)‚. The drawings of Oglala Amos Bad Heart Bull illustrates the Captive Hill fight as being greater in scope and numbers than the Little Big Horn in 1876. Outnumbered and defeated, the Crows by 1859 retreated north of the Big Horn Mountains.

Red Cloud fought prominently in this epic struggle, and his prowess gave him military standing among the Oglala and their allies. Those allies included the Northern Cheyenne, who, while retaining their own cultural identity, were becoming very closely integrated with the Lakota. The two peoples traveled together and the Cheyenne language began incorporating Siouian words.

The Cheyenne shared in the conquest of the Powder River County, and one of their head men named Black Horse stated the case boldly to an American Army officer in 1866:

In the 1860s, when the Bozeman Trail to newly-discovered goldfields in Montana cut into this strategically, economically and ecologically vital region, the Lakota and Northern Cheyenne resisted. They were not defending an ancient homeland; they were protecting land that they had recently earned through right of conquest, land where they had spilled much blood. They had won the Power River Country in an epic struggle, and they were ready to engage in another epic struggle to retain it. 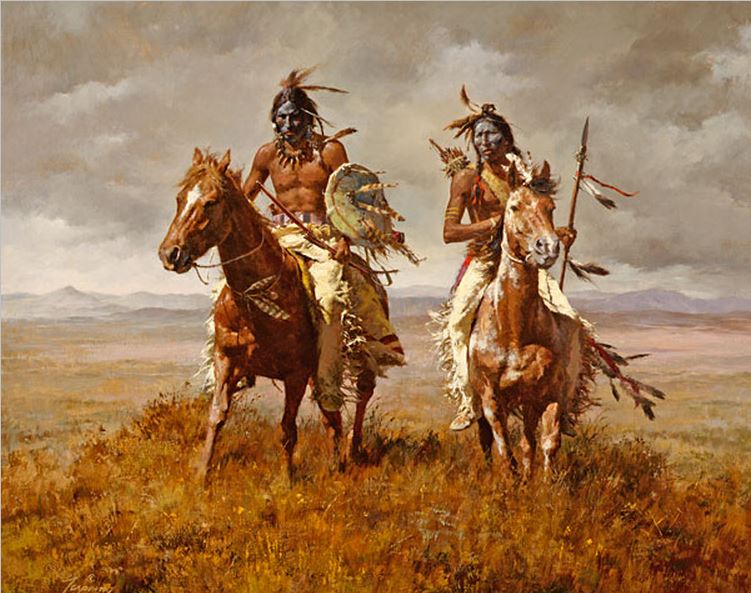 After conquering the Powder River Country from the Crows, the Lakota were prepared to take on all comers to keep it. Art by Howard Terpning.