April 6, 2017, will mark the 100th anniversary of the entry of the United States into The Great War.

The U.S., ostensibly neutral through almost three years of titanic struggle, had had its thumb on the scale for some time, in support of the Allies against the Central Powers, but it took German provocation of Mexico — offering U.S. territory in exchange for a Mexican attack on the United States — to finally precipitate intervention. That would be the famous Zimmermann Telegram, from the German foreign minister to the government of Venustiano Carranza in Mexico, intercepted and decoded by the British and handed over to the United States government.

“We intend to begin on the first of February unrestricted submarine warfare. We shall endeavor in spite of this to keep the United States of America neutral. In the event of this not succeeding, we make Mexico a proposal or alliance on the following basis: make war together, make peace together, generous financial support and an understanding on our part that Mexico is to reconquer the lost territory in Texas, New Mexico, and Arizona. The settlement in detail is left to you. You will inform the President of the above most secretly as soon as the outbreak of war with the United States of America is certain and add the suggestion that he should, on his own initiative, invite Japan to immediate adherence and at the same time mediate between Japan and ourselves. Please call the President’s attention to the fact that the ruthless employment of our submarines now offers the prospect of compelling England in a few months to make peace.” Signed, ZIMMERMANN.

PBS American Experience will soon air a doco on U.S. involvement in the war.

In conjunction with the 100th anniversary of America’s entry into the war on April 6, 1917, The Great War, a six-hour documentary presented over three nights, explores how World War I changed America and the world. Drawing on the latest scholarship, including unpublished diaries, memoirs and letters, The Great War tells the rich and complex story of the conflict through the voices of nurses, journalists, aviators and the American troops who came to be known as “doughboys.” The series explores the experiences of African-American and Latino soldiers, suffragists, Native American “code talkers,” and others whose participation in the war to “make the world safe for democracy” has been largely forgotten.

The American Experience documentaries have been uniformly excellent, and I expect that this three-parter will be an outstanding exploration of an intervention that shaped modern America for good and for ill — one that most Americans know almost nothing about. 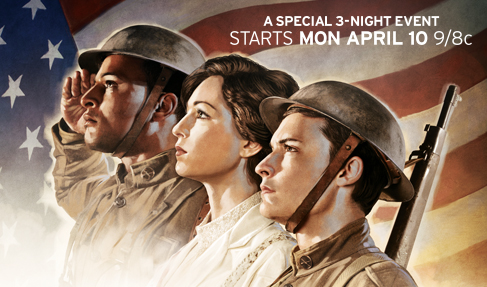