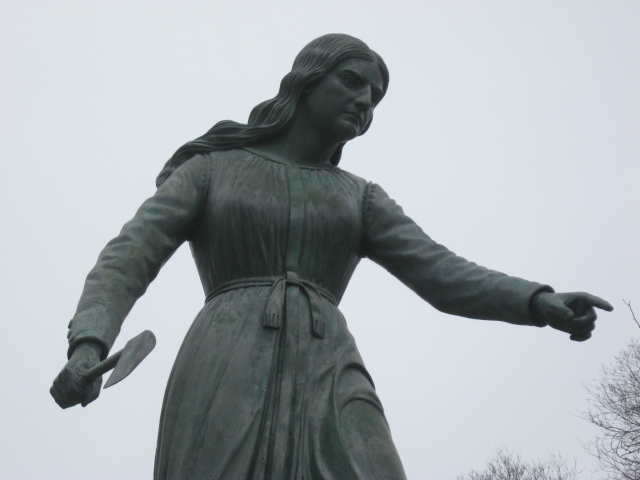 Hannah Duston the Slayer. A statue of her stands near the site of her bloody exploit.

The Puritans give me the creeps. A more neurotic bunch never plagued the pages of history. Their world was the stuff of strange nightmares, a weird tale come to life in a steaming caldron of spiritual anxiety swirling around doubts about salvation. In the extreme, their anxieties manifested themselves in the form of demons and witches and the lurking presence of Satan.

As the late Robert E. Howard scholar Steve Tomkins noted, “a case can be made that the Puritans were the only Americans who actually dwelt in a sword-and-sorcery universe.”

Yet, whatever supernatural cast they gave to their world, their nightmares were real enough. The colonial New England frontier saw some of the most savage, unrestrained slaughter in the history of the Frontier Partisans. King Philip’s War in 1675-76 was, per capita, the bloodiest war in American history, bar none. And as the 17th Century wound to a close, international rivalry between France and England turned the colonies — including the towns and farms of New England — into an imperial battleground. (Of course, the Puritans could dish it out, too, in great bloody ladels of Old Testament wrath and mayhem. Just ask the Pequot or the Narragansett…)

King William’s War came to Haverhill, Massachusetts, in March 1697, when a raiding party of Abenaki from Canada  struck the village. Hannah was bedridden six days after the birth of her ninth child, a girl named Martha. Her husband Thomas had to make a hideous choice. He could not defend Hannah and their newborn girl and save the other eight children both. He fled with the eight. 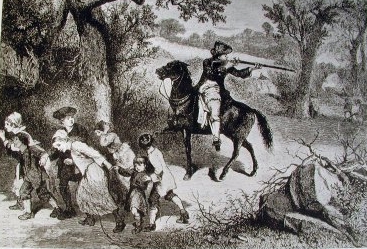 Thomas Duston herded eight of his children to safety, holding attacking Abenaki at bay with the threat of the single charge in his musket.

Duston herded the children before him, while standing off the Abenaki with a musket. He couldn’t discharge his weapon, knowing that the warriors would then rush him, so he backed away, raising the weapon at each warrior who exposed himself in turn. Nobody wanted to be the one to die, so he was able to get the children to safety.

Hannah was taken, along with Martha and her nurse, Mary Neff. Little Martha didn’t last long. A warrior dashed her brains out against the trunk of an apple tree.

The raiding party headed north and Duston and Neff, along with a 12-year-old boy named Samuel Leonardson (or Lennardson) captured elsewhere, wound up on an island the Merrimack River in New Hampshire with a group of 13 Abenaki, which included some Indian children. One night, Duston, Neff and Leonardson took up tomahawks and brained 10 of their sleeping captors, two men, two women and six kids. One woman was left for dead with grievous head wounds, but somehow crawled off and survived. A couple of children escaped.

Duston and her companions took up a gun and a canoe and escaped, having punched holes in other canoes to foil pursuit.

Killing your captors in their sleep, especially children… cruel stuff. But then again, the Abenaki had brained Hannah’s newborn.

“But then Duston did something that makes her story even more of a moral quagmire,” says Scott Weidensaul in ‘The First Frontier.’ “Having made their successful escape against immense odds, she turned her party around and returned to camp. There she straddled each body, and, with a knife, peeled the scalps off the ten dead Abenakis — including the children — wrapping the bloody skins in a piece of fabric.”

Weidensaul comes to no firm moral conclusion, but he implies that the deliberate return to scalp the dead puts Duston’s actions in a light other than that of grieving, enraged and unhinged mother — especially since she and her husband collected a bounty from the colonial government of Massachusetts upon her “redemption” from captivity. Thomas Duston received a bounty, too, for his actions during the Haverhill attack. The family used the money to buy more farm land. Maybe the whole scalp business was just practical…

But then, Hannah came from what we today would call a “dysfunctional” family, and may have come into this whole traumatic episode some problems associated with that, so…

A witches brew of cruelty, violence and possibly insanity.

Thing is, unbelievable cruelty was common currency on that early frontier, no matter whether Christian or pagan or Christian Indian (the Abenaki were largely Catholic). And if you think that times have changed, look no further than Syria to see how quickly a settled society can descend into chaos and moral insanity.

For a long time, Hannah Duston was regarded as a heroine, although one of a particularly bloody stripe. Revisionist history would make her a villainess. For me it is sufficient to recognize that Hannah Duston was both a victim and a killer, a survivor — and an absolute hellcat of a Frontier Partisan.