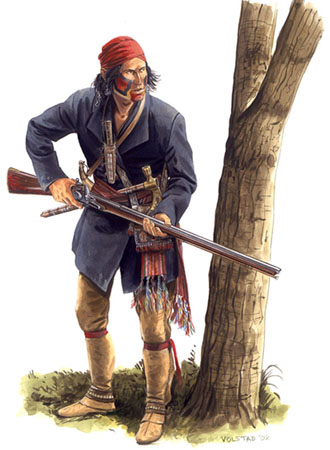 I guess you can’t make it as a white male in academia without tugging the forelock to current pieties about gender, “white privilege” and colonialism, etc. It must be tough. Hope it’s worth it. I’m glad I left, cuz I’m not one to truckle to cultural mandarins.

Reading a book on the Bushwhackers of the Civil War, I was struck that the author was profoundly drawn to these wild figures — and he had to excuse his fascination by running his thesis and his language through a strainer of blather about gender and masculinity and such. It’s a good book, but I find the obsequiousness pathetic.

Then this morning I ran across a click-bait headline on The Daily Beast: “Native Americans Invented Our Gun Culture—and Yes, We Stole That, Too.”

The author, James A. Warren, is a successful author of military history and a former visiting scholar in the American Studies Department at Brown University. He takes a slightly different tack, employing an arch, oh-so-ironic and knowing wink-and-nod so that he can be a gun guy and be fascinated by gun guys and still keep his academic card. Bah!

I almost stopped reading — but I’m glad I didn’t.

After getting through the first five paragraphs of virtue-signaling by an oh-so-self-aware gun owner, we get to the meat of the story — an introduction to yet one more book that I MUST have. 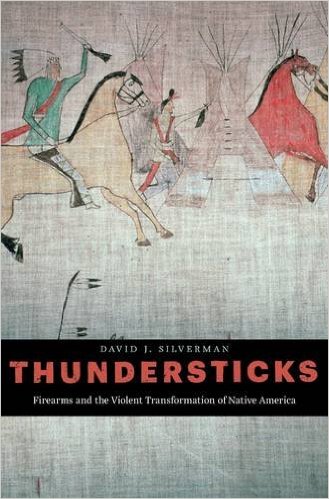 David J. Silverman, a professor of history at George Washington University, makes a lively and compelling argument in his new book, Thundersticks: Firearms and the Violent Transformation of Native America, that the conventional wisdom about the origins of our gun culture needs emending.

Yes, Europeans created and manufactured firearms, but in colonial America, it was the Indian who first fully embraced the gun, and mastered its varied applications. In fact, says Silverman, for more than 200 years, Indian peoples across the breadth of the North America employed firearms to transform not only their way of war, but their methods of hunting, and even their diplomacy with other Indians, and the great colonial powers of England, France, Spain, and the Netherlands.

“The centrality of guns to Native American warfare and hunting made them symbols of Indian manhood,” Silverman explains…

Guns — buying, selling, and using them — played a crucial role in the rise and fall of scores of Indian groups and tribes, often at the expense of other Indians. Along what Silverman calls the “gun frontier”—a continually shifting zone of contact just beyond the outer reaches of Euro-American settlement, where Indians outnumbered whites, Native American peoples were well positioned to trade their friendship, military assistance, and animal pelts for large quantities of the finest firearms. “Indians used their arsenals to cut off indigenous enemies from the arms trade, and seize hunting grounds, slaves, and horses” from other Indian groups. And of course, they employed those same arsenals to defend their autonomy and territorial integrity from European encroachment.

Of course, I immediately downloaded a sample of Thundersticks and found, much to my satisfaction, that Silverman does not seem to be cherry-picking his history in order to grind a contemporary socio-political ax. He’s simply and gloriously digging in to some real-deal frontier history.

Thundersticks opens with the 1877 surrender of Lakota chief Crazy Horse — who made a point of negotiating a hand-over of his peoples’ firearms as opposed to confiscation. It was an important symbolic point for the war leader. Crazy Horse himself turned over three Winchester rifles.

Crazy Horse was a Winchester man. The great John Clymer depicted him leading a charge at the Battle of the Rosebud, 1876.

Based on the table of contents, it appears that Silverman covers a wide range —geographically and temporally — and he’s not just hitting on the most well-known stuff. King Phillip’s War, the Seminole Resistance, the Fur Trade, Indian gunrunning… Yeah, I’m all over this.

I refrained from clicking the purchase button on the Kindle — this is one I’m going to want for the shelf.

There is a lot of really good work being done in academia in the field of “borderland history,” creating a better theoretical understanding of the nature of frontiers. I’m grateful for that. Hell, it’s vital to my own work. I suppose that I’m grateful that these privileged, elite white males who secretly just plain dig the wild and woolly — as all men should — are willing to do what they have to do to operate in academia. Otherwise it would be entirely surrendered to shrill ax-grinding and Maoist “self-criticism.”

Never could do it, myself. Prideful, I guess. Or maybe it’s self-preservation. My wife occasionally points out that if I’d stayed in that environment I’d have ended up in jail.

I’ll continue operating out here in the hinterlands, surrounded by my own Thundersticks — and knives and tomahawks. I will continue to unabashedly love my wild, badass Frontier Partisans — without irony and with no apologies.

And now I’m gonna call my local indie bookstore and order up a copy of Thundersticks.