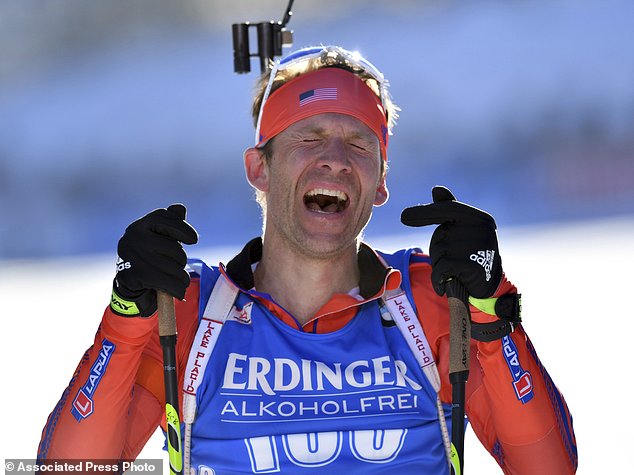 When I post on Biathlon, it usually has something to do with stunningly beautiful Central or Eastern European women. Not this time. The United States of America has its first-ever gold medalist in the World Championships. Tip your hat to Lowell Bailey.

HOCHFILZEN, Austria—Four days ago, Lowell Bailey left the shooting range after cleaning his fourth stage in the pursuit, and was in second place.

Things didn’t go his way and he saw first World Championships silver, then bronze, slip from his grasp as other men were stronger on the Hochfilzen race course’s big hills. He ultimately finished sixth, after placing fourth in the sprint.

Today, the American biathlete again left the range after cleaning his fourth stage. Two key differences: this time he had hit 20 out of 20 targets, rather than missing once. And this time, he was in first place, although he didn’t know it right away.

“I was really happy about it, obviously,’ Bailey said. “There was a surge of adrenaline immediately when I left the mat. Obviously most of the race is finished by that point, but in my mind, that was where the race began, the second I left the mat.”

Bailey was the second-to-last starter out of the 102-man field, and there was no chance of anyone behind him besting his time. When he hit the course, he had a 6.4-second lead on Ondrej Moravec of the Czech Republic.

If he could protect that lead, Bailey would become the first American ever to win a gold medal at biathlon World Championships. The U.S. has also famously never won an Olympic medal in biathlon, the last such winter sport, and Bailey had never won a World Cup before, either.

After watching a medal slip away in the pursuit, he wasn’t going to let it happen again.

Skier and Frontier Partisan Rick Schwertfeger said, “Saw his race. What a finish!” Apparently he owes his service team a beer — the condition of the skis made the difference. But — and I love this — the reason he was in position to win is that he shot clean. Well done, rifleman!

Previous Post: « An Anarchist Cossack And A Mobile Machine Gun Platform
Next Post: Crossing The Desert With ‘Rogue Heroes’ »