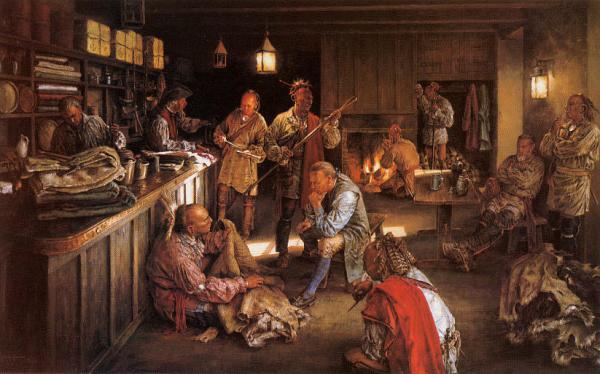 The Middle Ground was a land of mingling cultures, driven by trade. Painting “Winter Trade” by the great painter of the Eastern Frontier, Robert W. Griffing.

It was a land of refugees.

The mid-18th Century Ohio Country was full of dislocated peoples, from the wandering Shawnee to the displace Lenape to Iroquois who had left their heartland and would come to be called Mingo. Europeans in that backcountry tended to be refugees, too: Scotch-Irish, Palatine Germans, Englishmen seeking the main chance. Far from a line of demarcation between cultures, the frontier was a place were cultures met and intermingled in a swirl of commerce. They called it the Middle Ground. 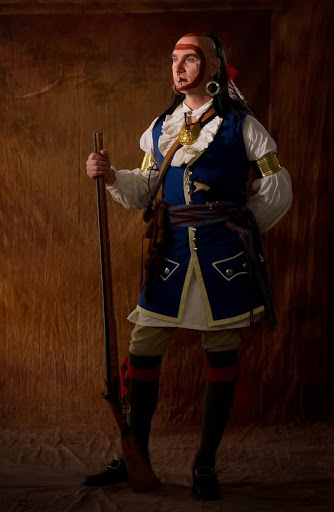 Andrew Montour was the classic Man of the Middle Ground. A métis of French/Oneida descent. His mother was the renowned Madame Montour, herself a mixed-blood, who had acted as an official interpreter for the colonial government of New York. “French Andrew” would serve in a similar capacity in the Pennsylvania/Virginia backcountry borderland.

He certainly had the qualifications as a linguist, speaking both French and English and a number of native languages and dialects. He was culturally a mix of European and Indian, which was reflected in his dress. He wore a band of paint around his face and bangles in his ears, and a European coat and waistcoat and stockings and buckle shoes.

Montour served as an intermediary with the tribes of the Ohio Country and served the British during the French & Indian War and Pontiac’s Rebellion, leading raiding parties against the French-allied tribes. Before the war, he tried to establish himself as the proprietor of a community in western Pennsylvania for misfits like himself. The scheme alarmed both the Pennsylvania authorities and the Iroquois, who were worried that “lower orders” of whites and Indians mutually supporting each other would prove intractable and interfere with the schemes of the shot callers. Montour’s sometime friend and employer, frontier diplomat Conrad Weiser, helped scotch the plan and Montour’s land was sold out from under him.

Montour was generally well-regarded by men of influence on the frontier — to include George Washington — but only when sober. Like so many frontier partisans, Montour had a major problem with alcohol. He would get roaring drunk and belligerent, cursing his employers roundly, then sober up and be contrite.

In his magisterial book “The First Frontier,” Scott Weidensaul offers a sympathetic portrait of Montour:

“In ways that would haunt him all his life, Andrew Montour was the living embodiment of the patchwork human frontier, a shadow of the physical borderlands. And when he tried to create a place where he could find peace — a place for all the other in-betweens and castoffs, half-bloods and immigrants, refugees and wanderers — both of Montour’s worlds, the Indian and the European, conspired to crush his dream. No wonder he drank a lot.”

In 1772, one of his Seneca drinking buddies murdered him during a binge. It was a sad — but not untypical — end for a Man of the Middle Ground.