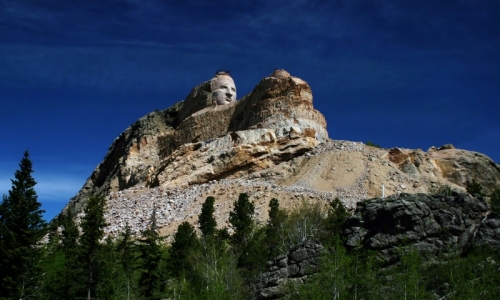 Lengthy article on CNN today about the decades-long effort to carve a massive sculpture tribute to Crazy Horse and the native resistance out of an outcropping in the Black Hills.

I distinctly remember owning a children’s book on the project when I was just a tyke. Polish sculptor Korczak Ziolkowski worked on the site from the 1940s till his death in 1982. Magnificent obsession you think? Now a non-profit continues the work, ever so slowly…

The article notes that the project was a counterpoint to the carving of four presidential mugs into Mt. Rushmore, also in the Black Hills:

“Chief Henry Standing Bear, then-leader of the Lakota tribe, didn’t like the four huge American faces peering over his people’s land, so he asked Ziolkowski if he could carve a monument in honor of a Native American legend.”

The project isn’t universally popular among the Lakota.

“In an interview with Voice of America, Elaine Quiver, another descendant of Crazy Horse, said Standing Bear had no right to order the monument.

“They don’t respect our culture because we didn’t give permission for someone to carve the sacred Black Hills where our burial grounds are,” Quiver said. “They were there for us to enjoy and they were there for us to pray. But it wasn’t meant to be carved into images, which is very wrong for all of us. The more I think about it, the more it’s a desecration of our Indian culture. Not just Crazy Horse, but all of us.”

Tim Giago, founder of the Native Sun News, which is based in nearby Rapid City, told The New York Times he has never heard “a single Native American say, ‘I’m proud of that mountain.’ “

I think I’m with Elaine Quiver on this one. There is something compelling about the artistic obsession, but I’ve never thought the mountains were enhanced by the hand of man. My guess is Crazy Horse would agree.