Out where the crosses of San Carlos
Shine ’neath a desert moon
Near the canyons where Geronimo rode
And the ocotillo blooms
Yeah Yeah Yeah Yeah Hoyah
Where’s it all going?

The crosses of San Carlos don’t only mark the site of alcohol-fueled wrecks on Highway 70.

The legacy of deadly pollution — of various kinds — lives on at the San Carlos Reservation. The place was pestilential when the U.S. government first started concentrating the Apaches there, and it has continued to be deadly to the people who live there. Sad.

From the Los Angeles Times:

The sound always came first, a low buzz that grew and grew until it roared through the valley. Then the olive-colored plane appeared overhead, flying low. In its wake was a thick shower of oily droplets making a long, slow fall to the forested gullies below.

Kids on the Apache reservation back then chased the planes over gem-laden hills, past the flame-yellow salt cedars lining the banks of the Gila River. If they arrived ahead of the planes, they stood under the mysterious, oily rain, waiting for rainbows.

“We just played in it, drank the water with it in there, ate the food we hung out to dry covered in it,” said Mike Stevens, 62. “Didn’t know what it was.”

The planes were delivering a chemical cocktail with components similar to Agent Orange, the powerful herbicide that laid bare the jungles of Vietnam during the 1960s to allow American warplanes to peer into guerrilla encampments.

The compound, known as Silvex, was deployed as part of a little-known test effort from 1961 to 1972 to wipe out water-hungry vegetation on the San Carlos Apache Reservation, part of a larger effort by the federal government to protect scarce groundwater in the newly booming city of Phoenix. 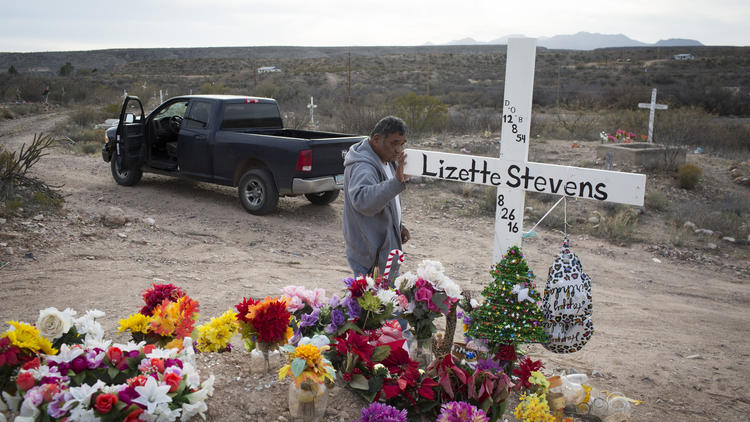 Mike Stevens visits the grave of his late wife, Lizette, on the reservation. Lizette’s mother, sister and aunt died within a few years of one another in the 1980s and 1990s. (Caitlin O’Hara / For The Times)