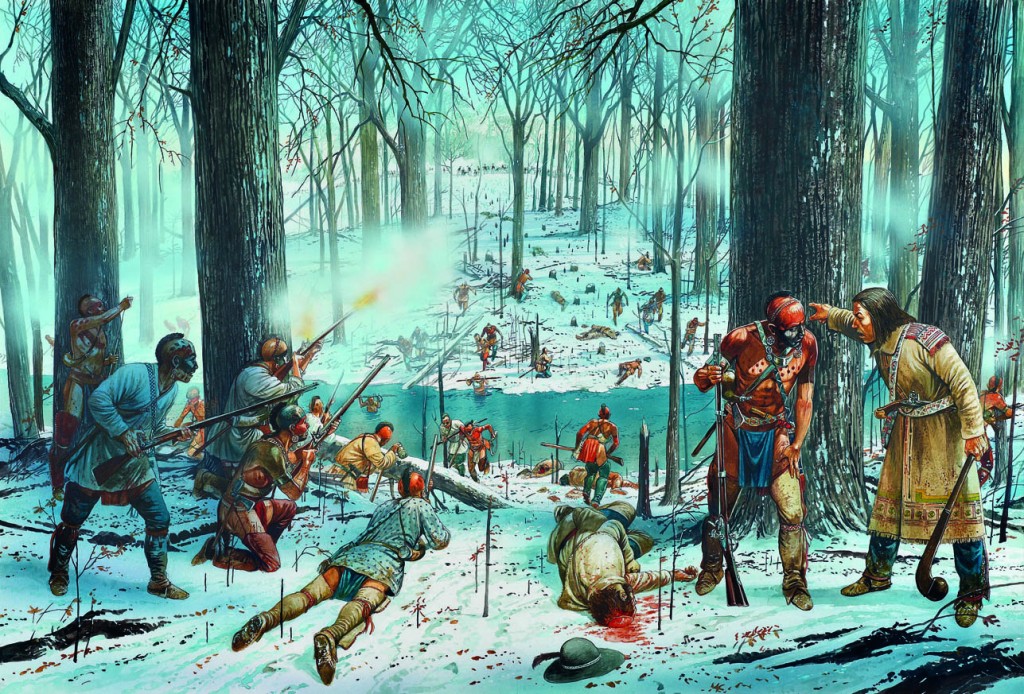 “Was November 4 in the year of ’91
We had a sore engagement near to Fort Jefferson
St. Clair was our commander, which may remembered be
But we left 900 soldiers in that Western Territory “

That was President George Washington’s warning to General Arthur St. Clair as he authorized a punitive strike against a native confederacy that was threatening settlement of the Old Northwest and disrupting traffic on the Ohio River — with a gruesome death toll among the flatboats descending the river for trade and settlement.

Pushed out of their Kentucky hunting lands and away from the Ohio River line, the Shawnees led by Blue Jacket formed a coalition with the Miami chief Little Turtle to resist further incursions into the Northwest Territories. In 1791, President Washington entrusted St. Clair, Governor of the Northwest Territory, with essentially the entire U.S. Army to break the coalition.

Big mistake. The result was one of the epic failures of arms in the history of frontier warfare.

It wasn’t all St. Clair’s fault.

“The American frontier of this period proved as difficult for military operations as any foreign operation today. Support troops did not exist, therefore civilian contractors ran the Army’s transportation and supply systems. Many of these contractors proved incapable of their responsibilities, incompetent and several proved corrupt. …

“The small arms used by the troops arrived with most of them needing immediate repair. Cartridge boxes and other individual equipment arrived from storage at West Point with visible mold. Tools needed for building roads and a line of forts proved entirely too few for the needs of this expedition. Nevertheless, Congress pressured St. Clair into launching his expedition without the necessary supplies and improper training of his force.”

St. Clair set off into western Ohio with a small core of reasonably competent Regulars, a bunch of half-trained (at best) militia, and a long logistical tail of camp followers composed of sutlers, laundresses, soldiers’ families and whores, all of whom moved slowly and consumed already scarce supplies.

Unsurprisingly, a bunch of ill-disciplined militiamen deserted, and St. Clair sent out some of his Regulars to track them down to prevent their plundering his supply line. Sending off some of his few competent troops was not the smartest move…

The commander also mishandled his Chickasaw scouts, whom he didn’t trust, so he lacked good intelligence of the enemy’s movements and dispositions.

On November 3, St. Clair’s army went into camp along the Wabash River, on low, wooded ground under a light snowfall.

“Camped in the heart of Indian territory, St. Clair did not take all the proper precautions for guarding against attack. The nervous sentries fired throughout the night at supposed Indians, preventing any rest for the troops.”

The next morning, Blue Jacket’s Shawnees and warriors of the Miami, Ottawa, Delaware, Potawatomi and other nations attacked the camp at breakfast. For the confederated tribes, the battle was a tactical masterpiece. Native marksmen targeted officers and artillerymen, disrupting command structure and disabling a potentially potent weapon.

When the Regulars formed up for a bayonet charge, the warriors faded back, then coalesced around the exposed unit and destroyed it. 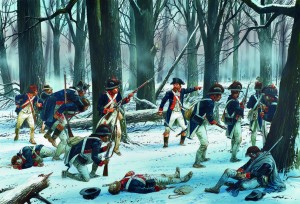 The Regulars tried to rally, but to no avail.
Art by Peter Dennis from “Wabash 1791: St Clair’s Defeat.”

The “battle” was a slaughter. With tactical surprise and leadership disruption taking their toll, St. Clair’s force of 2,000 broke and ran. The Indians got amongst the camp followers, killing more than 600 soldiers and non-combatants and wounding some 300 more. It was the worst defeat suffered by an American force up to the Civil War.

In terms of loss-to-strength proportions, it probably ranks as the worst defeat in U.S. history.

Unlike Varus, whose legions were destroyed in the Teutoburg Forest, St. Clair did not fall on his sword. In fact, he defended his reputation in the first Congressional investigation of the fledgling U.S. Government. Congress exonerated him — sort of — laying blame for the disaster at the feet of the War Department and the quartermaster service.

George Washington may well have felt like Caesar Augustus banging his head against a marble pillar and crying “Give me back my legions!” but the first president was too reserved and dignified for such displays. And American generals don’t commit suicide when they fail.

St. Clair resigned his commission and returned to his post as territorial governor.

Blue Jacket and Little Turtle had a mighty victory to celebrate. It would, however, prove illusory. Less than three years later, General “Mad” Anthony Wayne would defeat the tribes of the Northwest at the Battle of Fallen Timbers, crushing the native resistance. It would flare again, briefly, in the War of 1812, but for all intents and purposes, the battle for America’s heartland was over.

(For a detailed depiction of the Northwest campaigns, read the full Frontier Battles essay quoted and linked above. It’s excellent.) 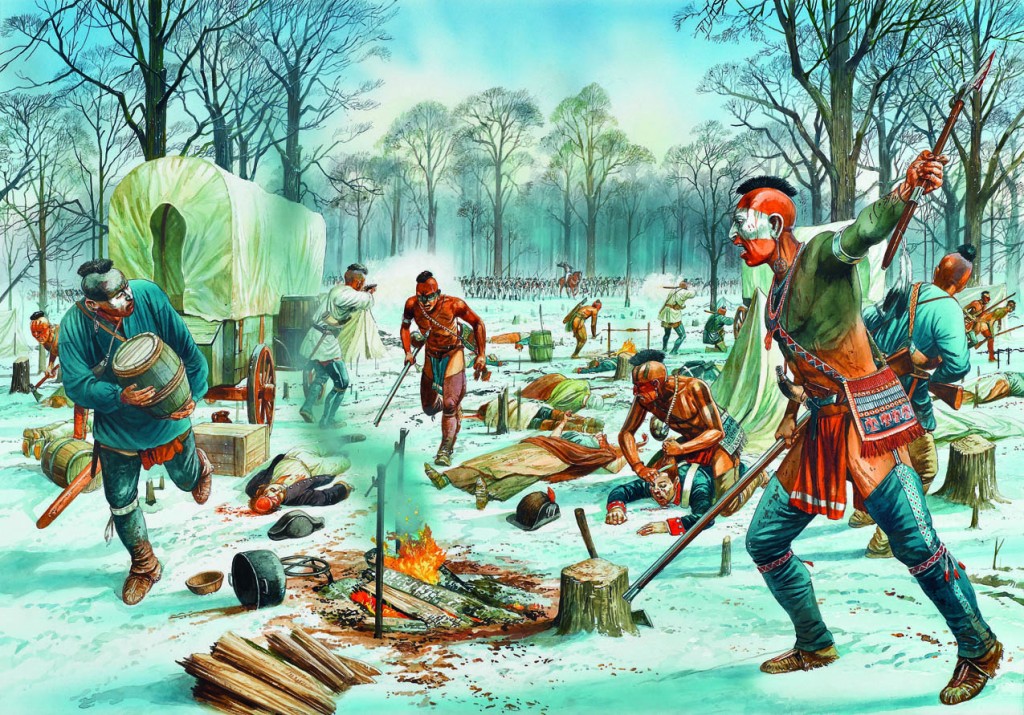 The Indians got into the American camp and a defeat turned into a rout and a rout into a slaughter. Art by Peter Dennis from “Wabash 1791: St Clair’s Defeat.”