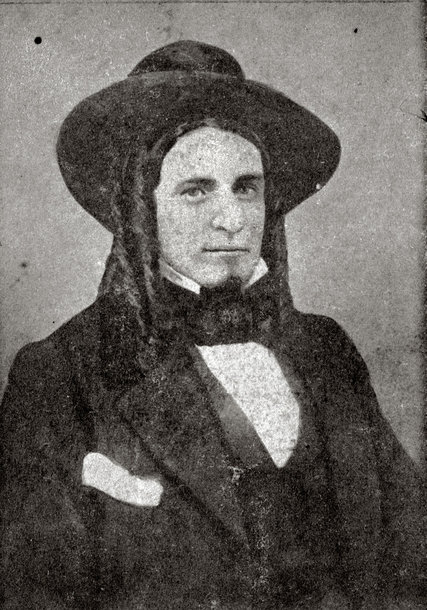 California was the most violent frontier territory in the American West. Texas could give the Golden State a run when it came to murder and mayhem, but the edge-of-the-West beats ’em all. And, strangely, we seldom think of it that way.

And California did its damndest to exterminate its Indian population. Some historians have taken to calling the near-extirpation of the California Indians an American genocide. I’ve got reservations about using that term, which historian Alan Taylor articulates very well:

“Genocide” … is rhetorically double-edged, provoking controversy as it invites attention. A 20th-century coinage, “genocide” derives from the industrial and bureaucratic scale of slaughter perfected by the Nazis. The term distorts if projected back onto the mid-19th century, when governments were far weaker and less cohesive in their purposes.

Most of the killing was done by vigilante bands, Indian hunters. Sometimes they were paid by the state, but the impetus for slaughter came from below and was stamped with approval from above. Seems to me that this was an exceptionally brutal, successful and historically-suppressed episode of “ethnic cleansing.”

It’s an important distinction historically, but it didn’t make much difference to the native peoples who were doing the dying, who were seeing their small bands and their cultures destroyed. Whatever you call it, it was a slaughter, and one of its bloody-handed perpetrators was a young scion of Philadelphia Quakers named Ben Wright.

Ben Wright was a lousy Quaker. He drank. A lot. He indulged in licentious relationships with women without benefit of clergy. And, far from cleaving to the pacifism of that sect, he liked to kill. A lot.

Wright came West in 1847, along the Oregon Trail. Robert Aquinas McNally, who is finishing a history of the Modoc War of the 1870s, writes that:

…soon after reaching Oregon, Wright enlisted in a militia to put down the Cayuse Nation. In this dirty work of hunting and killing Indians he found his calling.

The young man adapted well to frontier life. He was an avid hunter — both of animals and men — and honed the essential skills of the Frontier Partisan. He was a fine marksman, a competent tracker and scout, and a good horseman. He also had leadership capabilities. He wore his hair long and dressed like a mountain man in the field. He seemed to routinely travel with a series of native concubines, whom he reportedly abused, especially when he was in his cups.

Wright wended his way south into California and settled north of Yreka along Cottonwood Creek.

By the early 1850s, the Applegate Trail had been established — a cutoff of the California Trail that ran from Nevada across the northeast corner of California and into Oregon. It ran through homeland of the Modoc around Tule Lake. 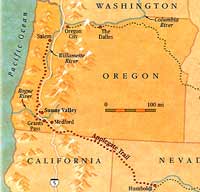 There were problems. The Modoc stole livestock and there were attacks on small wagon trains and packers. Among frontiersmen who were primed to go after natives anyway, any provocation called for a punitive expedition. And the men who rode out were seldom discriminating about who, exactly, bore the brunt of their vengeance.

Yreka’s miners raised a militia of 65 men, Ben Wright among them, and headed east to teach the Indians a lesson. They found no one to fight until, on the way home, they were hit in a nighttime attack, possibly by Indians from the Pit River country, that left several wounded. After that, the militiamen wanted revenge.

They got it the next morning when they came across 14 Modocs in a summer camp cooking breakfast. The Natives offered no threat, but almost all were shot down and scalped. Pushing on, the militiamen encountered another group of peaceful Modocs, who approached to ask for bread, bacon, and coffee. The whites killed them and took their scalps for display back in Yreka.

Wright was involved in numerous such scrapes and hunting expeditions in the region right along the Oregon/California line — breathtaking country I’ve traveled through many times.

He took to providing armed escort for emigrants as a means of making a living — and an opportunity to pursue his passion for the hunt.

The vigilantes spent the next three months escorting wagon trains from Clear Lake to Upper Klamath Lake. This duty gave Wright occasional opportunity to kill. When he and some of his men spotted two Indian women running for shelter, the mounted whites rode the pair down. One woman died outright from gunfire. The other suffered only an arm wound unlikely to kill. Wright dismounted and knifed her. Screaming, she bled out at the former Quaker’s feet.

The killings that would ever after bear the name “The Ben Wright Massacre” occurred in November 1852, at the tail end of Wright’s escort duties. What happened on that dark day is not really in dispute: Under the pretext of a truce and a feast, Wright and his vigilantes slaughtered between 30 and 90 Modocs — a crushing loss to a tribe that numbered only a few hundred.

What is in dispute is the whys and the wherefores of the killing. According to Modoc sources and historians like McNally, Wright intended from the first moment to murder as many Modocs as possible. Some accounts say that he attempted to poison their food with strychnine that had gone bad and failed to take effect.

Col. William Thompson, who fought in the Modoc War twenty year later says that’s all bosh — that the Modocs intended treachery and Wright and his men reversed the trap and turned the tables.

Funny thing is, every interpretation is based on the recollections of one of Wright’s men, Frank Riddle, who provided the only eyewitness account of the affair. History is ever in the eye of the beholder. 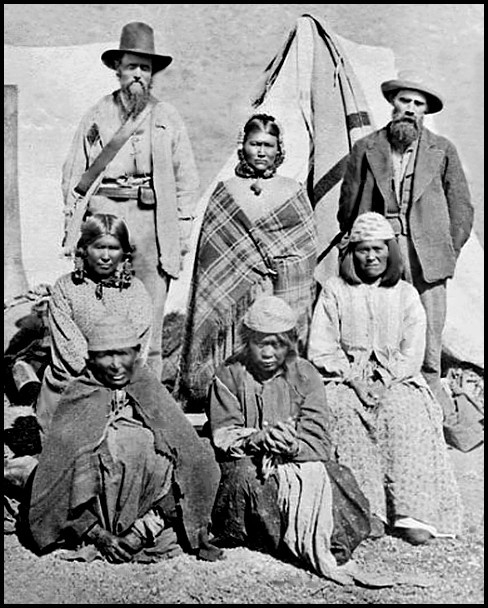 Frank Riddle, standing, right, was an interpreter among the Modoc. He was with Ben Wright on the expedition that culminated in massacre and offered his recollection of the events — which have been interpreted in very different ways by subsequent chroniclers.

It was raining heavily. Ben Wright, communicating with a Modoc who spoke some “white man talk,” called a peace conference and invited the Modocs in the surrounding country, promising to kill a beeve and make a feast of it. According to Thompson’s account, Wright hoped to get the Modocs to bring in two white girls they had captured from an emigrant train. That may have been true or it may have been a pretext; the notion of redeeming female captives certainly tugged at the moral fiber of American society and ennobled any Indian hunting expedition.

The Modocs gathered, and they ate, and the rain fell for six days. For whatever reason — either because he suspected treachery from the numerous tribesmen, or because he had as many Modocs in hand as he could expect to get, Wright kicked off the fireworks on a chilly, damp November morning. He donned a poncho and held beneath it a Dragoon revolver in each hand. He approached the Modoc chief, who was reportedly the father of the famous Captain Jack, and shot him dead.

Then the firing became general, and the Modocs, armed only with bows (some say unstrung in the rain) never had a chance.

Even Thompson, at pains to portray Wright heroically, acknowledges that it was a slaughter:

“…as the first shot rang out from Wright’s pistol his men opened a deadly fire with their rifles. For an instant, Riddle said, the savages formed a line and sent a shower of arrows over their heads, but they aimed too high and only one or two were slightly wounded. Dropping their rifles, Wright’s men charged, revolvers in hand. This was too much for savage valor and what were left fled in terror.

“It was now no longer a battle. The savages were searched out from among the sagebrush and shot like rabbits. Long poles were taken from the wickiups and those taking refuge in the river were poked out and shot as they struggled in the water. To avoid the bullets the Indians would dive and swim beneath the water, but watching the bubbles rise as they swam, the men shot them when they came up for air.” 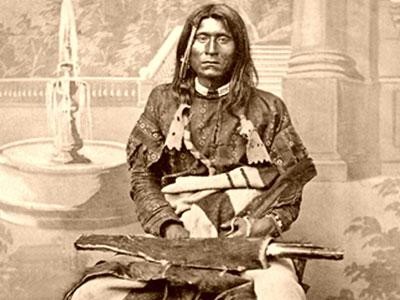 Kintpuash aka Captain Jack. It was supposedly his father who was killed by Wright, touching off The Ben Wright Massacre.

The body count varies 30 to 45 to 90. McNally thinks it was about 50. Wright and his posse rode into Yreka with scalps hanging from their shot pouches. They were acclaimed as heroes.

Wright’s stature as an Indian killer earned him a post as an Indian agent on the southern Oregon coast. McNally reports a gruesome denouement for the young killer:

The story opens in the muddy main street of Port Orford. A drunken Wright assaulted Chetcoe Jennie, the government interpreter who was his mistress of the moment, stripped her naked, and whipped her through the rain-soaked town. Set on avenging this ignominy, Jennie threw in with a group of Indians pushing back against the rising American tide. The leader was Enos, a Shoshone guide and scout who had worked for Wright and, for reasons that remain hidden, was as motivated by revenge as Chetcoe Jenny. Perhaps after a dance that turned into a brawl, perhaps in a dawn ambush, the reckoning came in the early hours of February 23, 1856, close to the mouth of the Rogue River. Enos killed Wright with an axe and—as legend has it—ate the dead man’s heart raw, sharing the meal with Chetcoe Jennie.

Less than two months later, Enos was strangled in a lynch party’s noose. The avenged Chetcoe Jennie vanished into the forest, never to be seen again.

An ending as lurid as that of John J. Glanton — for a similar breed of natural born killer on the savage frontier of the mid-19th century.