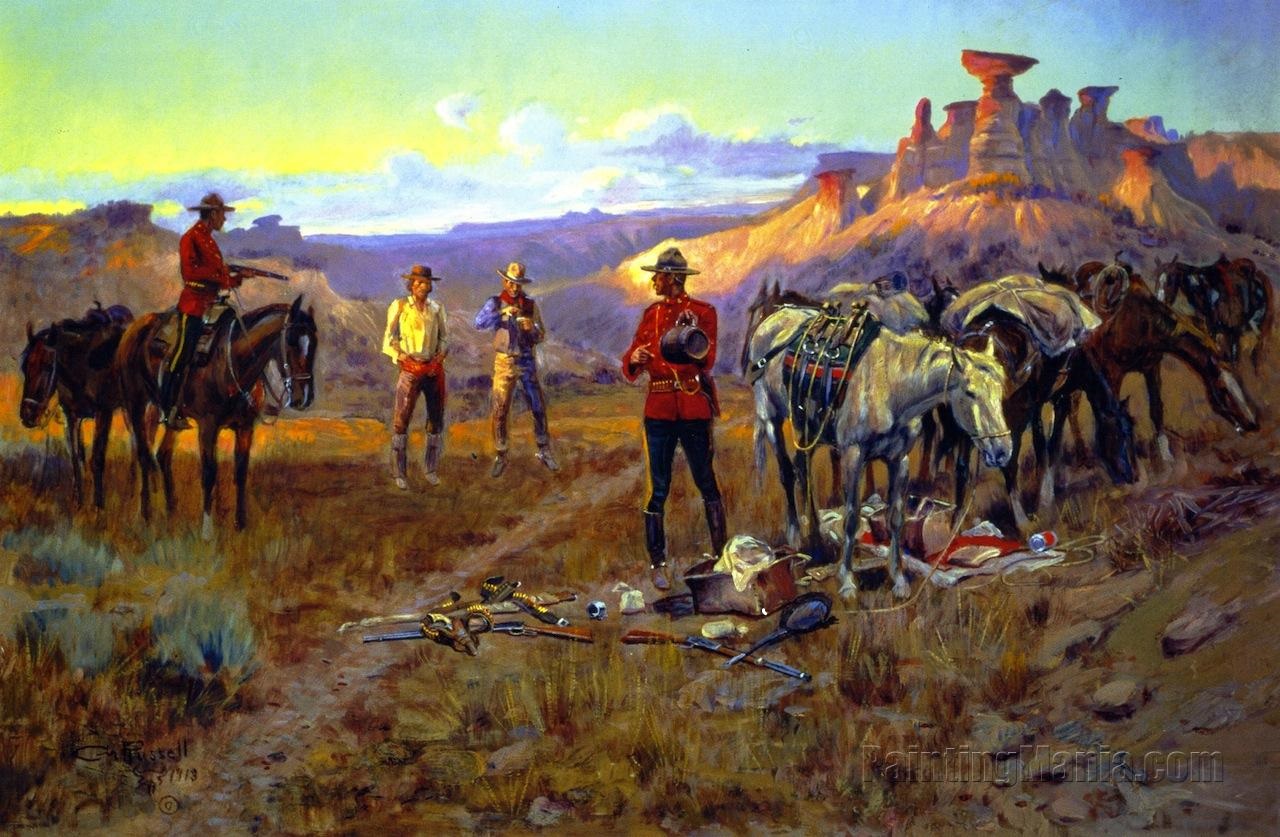 Whiskey Smugglers Caught With The Goods, by Charles M. Russell. The Mounties made a valiant effort to curb a rampant illicit trade in whiskey on the Canadian prairie, but there just weren’t enough of them to stop the flood.

“The whiskey brought among us by the Traders is fast killing us off and we are powerless before the evil. [We are] totally unable to resist the temptation to drink when brought in contact with the white man’s water. We are also unable to pitch anywhere that the Trader cannot follow us. Our horses, Buffalo robes and other articles of trade go for whisky; a large number of our people have killed one another and perished in various ways under the influence.”

A couple of weeks back, my wife and I dined at Sisters Saloon with friends old and new. I was deeply engaged in conversation at one end of a long table when, from the far end of said table I heard my new friend Doug say: “I have some 20 year old Scotch at home.”

I was instantly yanked out of my own conversation. It’s the damndest thing. I haven’t had a drink in almost 18 years, and yet the mere mention of a fine aged single-malt can put me on point like a hunting dog. I could taste the smoky, peaty flavor and feel the rush of warmth and hear the whisper of the promise of sweet abandon…

As I do in such situations, I pulled out my craving for the stuff and looked straight at it and laughed at the nature of my nature — and the moment dissipated.

Alcohol is powerful stuff. I gave it up two short months before my daughter’s birth, because I knew I had to make a choice between being a drunk and being a dad. Cutting back or “moderation management” was never an option. I’m an immoderate person. If I do something I do it — ardently and with intent. Just ask any of my friends who have watched me eat.

I started drinking at 15, and the truth is, I chose to be — wanted to be — a drinker, if not a drunk. All my heroes were hard drinkers: writers; songwriters — and Frontier Partisans. It was a baked-in part of my personal mythology.

The frontiers of the 18th and 19th centuries were awash in potent alcohol, from rum to brandy to whiskey. There were a few abstemious frontiersmen — Frederick Russell Burnham and Frederick Courteney Selous come to mind, as does George Armstrong Custer — but such men were very much the exception. For most of my frontier heroes, drink was a besetting vice, and for some it brought ruination.

Al Sieber’s massive hangover indirectly facilitated  Geronimo’s final outbreak in 1886, which was directly precipitated by an Apache tiswin-drinking binge. (Read about it in the soon-to-be-released Warriors of the Wildlands). Robert Rogers, who pioneered special operations warfare during the French and Indian War, died broken in health and spirit by financial misfortune, shoddy treatment by both British and American governments — and a savage appetite for rum. Frontier General George Rogers Clark, who won the Northwest Territory for the fledgling Republic, died a drunken shell of his former powerful self.

When Sam Houston left his young wife and the governor’s mansion in Tennessee (for reasons that remain mysterious to this day) he went to live among the Cherokee, and set about earning the name by which they called him: Big Drunk. It is remarkable that his ambition and sense of duty were powerful enough to rouse him from his alcoholic haze so that he could pull himself together and lead Texas to independence in 1836.

Tom Horn got shitfaced and talked himself into a hangman’s noose in a 1901 interview with Joe LeFors that included drunken bragging about shooting a 14-year-old in the back at a range of 300 yards — something he may not have actually done, or at least not on purpose. Texas pistoleer John Wesley Hardin’s sociopathic tendencies were let off the chain by steady and heavy consumption of alcohol, and another Texas gunman, Clay Allison, was rendered a dangerous madman when he imbibed.

It’s safe to say that most of the violence of the cow towns and mining camps was precipitated by the incredible intake of alcohol that was a big enticement of such places. The examples of alcoholic mayhem and destruction are legion and listing them all would be tedious and depressing.

Destructive as it was to the Anglo-American population, nothing can compare to the ravages that alcohol inflicted upon the native peoples. It could be argued that alcohol was the most potent weapon (after disease anyway) in the conquest of North America. The craving for alcohol debauched native cultures from the very beginnings of the fur trade that was the great economic engine of the frontier.

Rum, brandy and whiskey were fur trade staples from the very beginning.

Traders knew full well that there was an ethical problem with trading alcohol for furs — but few were willing to resist the demands of their customers. The native peoples craved rum, brandy and whiskey — and they would trade at ruinous loss to get it. The feverish need to obtain alcohol debased native hunting traditions and they slaughtered game just as wantonly as the whites to gain the currency to get drunk. Native women traded sex for alcohol on a wholesale scale — booze for themselves and for husbands, fathers and brothers, who readily pimped their wives, sisters and daughters out.

In the late 19th century, a massive illicit trade in whiskey boomed on the Canadian plains, leading to the plaint of Crowfoot, cited above. 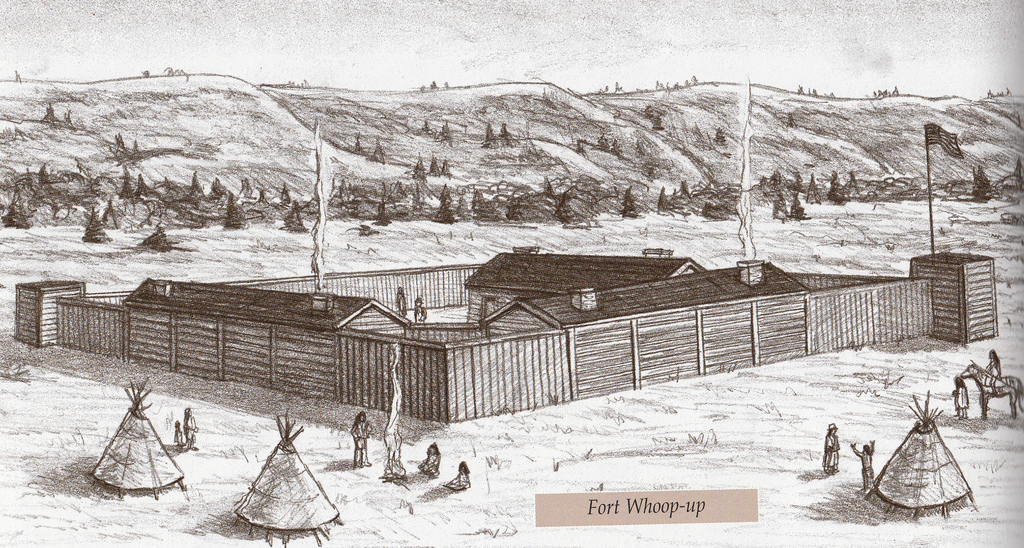 Fort Whoop-up was a notorious whiskey trading center on the Alberta prairie. Traders from Montana founded the post — and flew the Stars and Stripes. The establishment of Fort Whoop-up led to the formation of the Northwest Mounted Police. 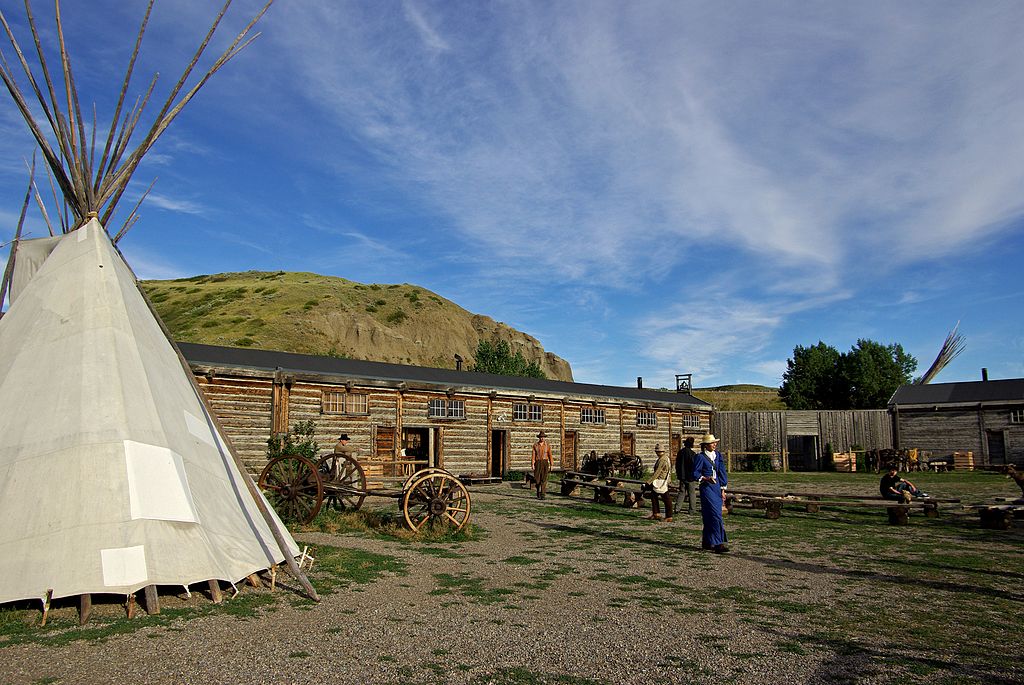 A modern re-creation of Fort Whoop-up.

The Apaches frequently gathered together and brewed their own tiswin and got riotously drunk. When in this state, warriors beat their wives and quarreled with one another — sometimes fatally. A tiswin-fired killing led to the outlawry of the Apache Kid. And, as seen in recent posts on the Shawnee scalp hunter Spybuck, the Apaches abandoned their usual vigilance when they got ahold of booze, and their besottedness allowed scalp hunters to approach and attack their camps and slaughter them in a state of inebriated confusion. And the scalp hunters usually celebrated by getting drunk.

There are all kinds of reasons why alcohol played such a big role in frontier life and death. A rum ration can get a man through a tough day, and it was one of the few creature comforts on offer to everyone from fur traders and trappers to seamen on the maritime frontier. Whiskey became a staple product of the frontier as settlers grew corn in Virginia, Kentucky and Tennessee and had to find a viable market product for it beyond what could be sold as foodstuffs.

Frontier living was hard on the body and rough on the health, and alcohol provided relief from pain and masked the symptoms of chronic disease. Then, as now, it was a highly counterproductive form of self-medication for depression. It also relieved the crushing boredom that was often a feature of frontier life, especially on isolated military outposts.

It ain’t a pretty picture, but there it is: The frontier was soaked in alcohol, from sea to shining sea. 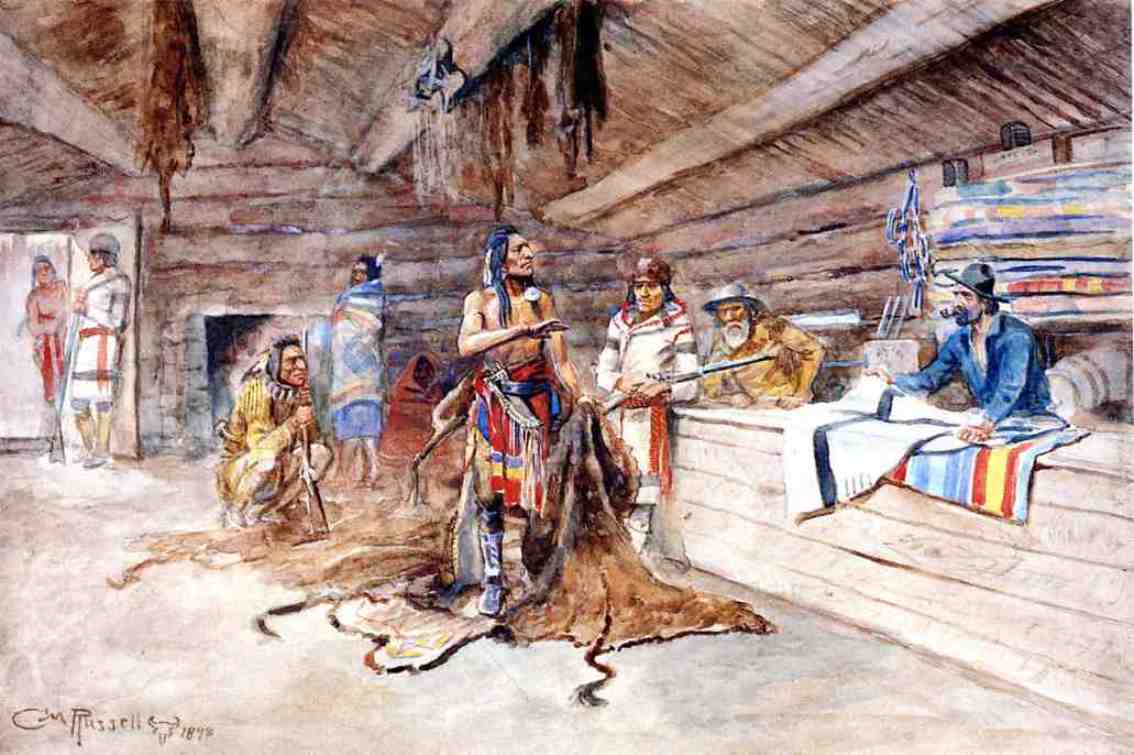 The trade in whiskey was integral to the broader fur trade.

Previous Post: « She Steps On The Moon When She Paws At The Sky
Next Post: Stuff That Works — The Wood Pile »