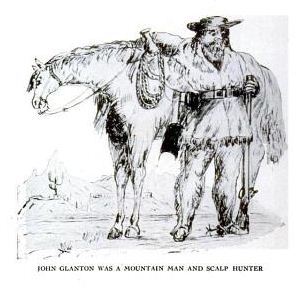 When they entered Glanton’s chamber he lurched upright and glared wildly about him. The small clay room he occupied was entirely filled with a brass bed he’d appropriated from some migrating family and he sat in it like a debauched feudal baron while his weapons hung in a rich array from the finials. Caballo en Pelo mounted into the actual bed with him and stood there while one of the attending tribunal handed him at his right side a common axe the hickory helve of which was carved with pagan motifs and tasseled with the feathers of predatory birds. Glanton spat.
Hack away you mean red nigger, he said, and the old man raised the axe and split the head of John Joel Glanton to the thrapple.
— Cormac McCarthy, “Blood Meridian”

Blood Meridian is the Great American Horror Story. And the intensity of its horror is rooted in the inescapable fact that — despite reading like a fevered phantasm of borderland violence — it’s real. Cormac McCarthy’s masterpiece is as deeply researched as any historical treatise, and its eschatology is hung on a frame of soul-searing historical fact.

He may be a subsidiary demon to The Judge’s Devil, but scalphunter captain John Joel Glanton is no figment of an overactive imagination: He was a real-deal, historical natural-born killer who stalked the borderlands in the mid-19th century — a gory nightmare of a man, deadly, morally insane and irredeemable.

Glanton was born in South Carolina in 1819 and lived variously in Louisiana, Arkansas and probably Tennessee before locating with his parents in Gonzalez, Texas. As a teenager, he participated in the Texas Revolution, reportedly narrowly missing being rubbed out in the massacre at Goliad in 1836.

The young ranger was engaged to be married, but his fiancé was kidnapped, raped, killed and scalped by Lipan Apaches. He later married a prominent Tejana beauty named Joaquina Menchaca, with whom he had several children. 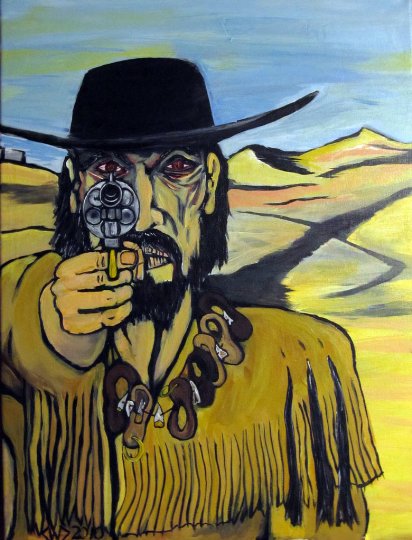 Glanton served with some distinction as a “Free Ranger” attached to various companies of “spies” (as scouts were often called in the 18th can early 19th centuries) and Texas Rangers. He was involved in the brutal counter-guerilla operations that the Texas Rangers conducted in Northern Mexico during the conflict. The Rangers had a bad tendency to kill indiscriminately — innocent civilians being hard to distinguish from guerrillas — and Glanton bloodied his hands with at least one out-and-out murder. He killed a Mexican civilian for his horse.

General Zachary Taylor took a pretty dim view of the Rangers in general, and this sort of thing outraged ld Rough and Ready. He ordered Glanton’s arrest, but Glanton’s commander, Captain Walter Lane, tipped the killer off and he fled. Glanton later joined the special scout company of the legendary Rip Ford.

When the war ended in 1848, Glanton returned to San Antonio. Post-war restlessness quickly got the better of him and he left his wife and children to lead an expedition to the brand-new goldfields of California in 1849. The outfit went south into Mexico on a circuitous route to California, and became stranded in Chihuahua. It was here that Glanton launched the career that would make him infamous: He contracted with the government of that Mexican state to hunt Apaches for a bounty on their scalps.

The Mexican states of Chihuahua and Sonora were tormented by the Apaches, who raided villages so persistently that some were abandoned and left to fall into stark and eerie ruin. The Mexican state officials’ answer was to make a paying proposition out of slaughter.

A University of Virginia American Studies Department treatise notes that:

In 1849, Chihuahua’s “Ley Quinto,” which would remain on the books until 1886, passed setting a price of $150 for live women and children, $200 for the scalps of warriors, and $250 for live warriors. Most professionals though felt that the extra $50 did not justify the increased risk and so traded in “receipts” only.

The scalp bounty was controversial in Chihuahua — and would prove an ugly disaster. As the Handbook of Texas Online notes:

(Glanton’s) campaigns during the remainder of 1849 were widespread, successful, and financially rewarding. By 1850, however, it became increasingly difficult for the Glanton gang to find hostile Apaches, and they began attacking peaceful agricultural Indians in the vicinity of Fort El Norte. Finally,  they turned to taking Mexican scalps for profit. As a result the Chihuahua government drove Glanton and his company into Sonora and put a bounty on his scalp. There he contracted with the authorities to fight the Indians, traded Indian scalps for bounties, and again resorted to taking Mexican scalps to increase his profit.

Glanton’s career as a scalp hunter was short and violent. He wasn’t as prolific as James “Santiago” Kirker, who had perhaps the most malevolent visage ever to stare down a cameraman. 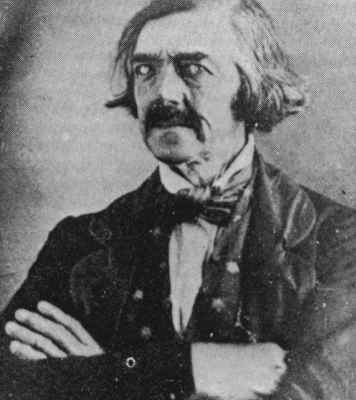 In 1850, the Glanton Gang siezed a ferry across the Colorado River, operated by the Yuma Indians. The scalphunters abused Yuma women, and killed American and Mexican travelers and stole their possessions. On April 23, 1850, the Yuma struck the Glanton Gang’s camp and slaughtered most of them. Accounts vary as to the precise details of Glanton’s death. Some have the Yuma bashing in his skull with clubs; others say he had his throat slit. At least one account has an Indian splitting his head with a hatchet. That’s obviously the one McCarthy went with. The Yumas  lashed his body to the carcass of a dog and burned it.

He had it coming.

I don’t know if Blood Meridian will actually be made into a movie. Don’t know if it should. But I’ll tell you this: The second Tom Hardy appeared on the screen in The Revenant I thought “that is John Joel Glanton.” Crazy eyes. 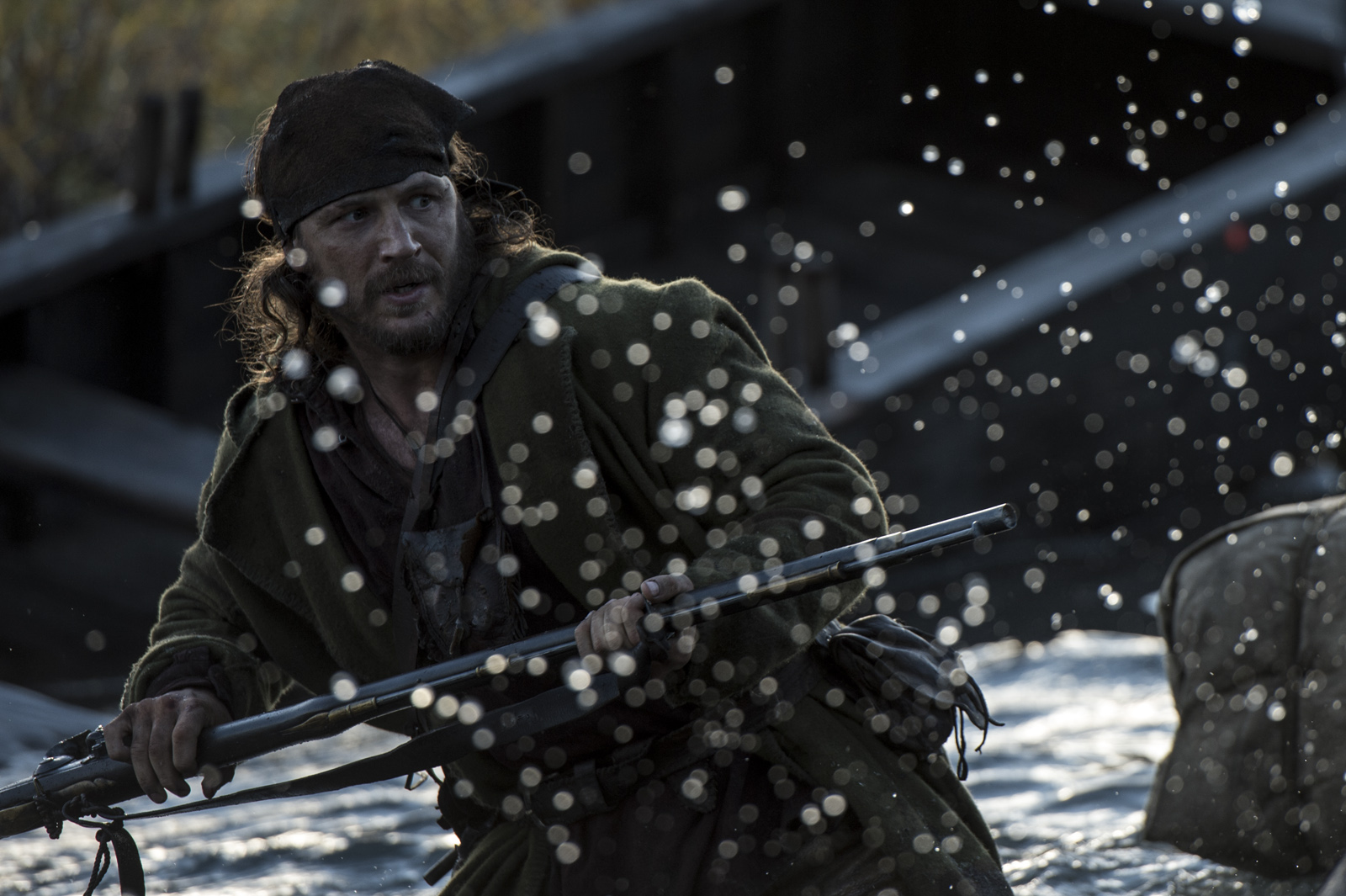 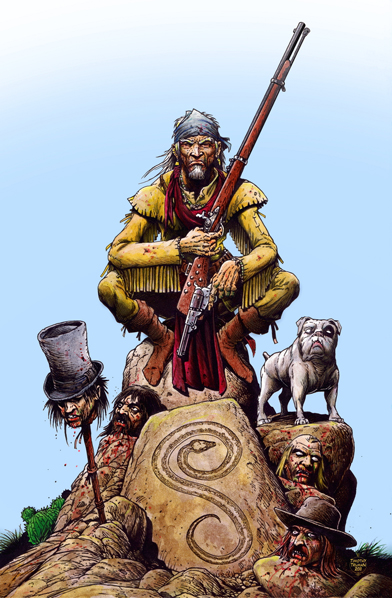 Tim Truman’s Hawken always put me in mind of Glanton.