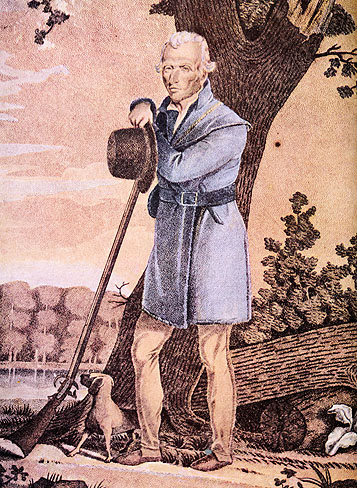 Reading the description of the Blue Licks battle in Robert Morgan’s biography of Daniel Boone, I came across a note on armament I hadn’t seen before.

Morgan says Boone went into the battle armed with a fowling piece stoked with a stout powder charge and a mixed load of shot and roundball (what they called buck-and-ball).  We’re so used to thinking of frontiersmen as riflemen that we tend to forget that smoothbores played a big role on the frontier. Especially in battle.

The American backcountry rifle might have been the premier long-range weapon of its day, but it was slow to load and maybe not the best choice for a close-range firefight. Boone knew he was likely going into a shootout when the militia mustered to chase down the Indians that besieged Bryan’s Station, so he picked a weapon suited for the task at hand.

Discerning gunfighters from that day to this have had a keen appreciation for the virtues of the scattergun. It’s a point-and-shoot weapon that’s easier to handle under stress than a rifle or a handgun and it’s unbeatable as a manstopper at up-close-and-personal ranges. A shotgun remains the best home-defense weapon a shootist could deploy.

Boone commanded the left wing of the Kentucky militia force that walked into a Shawnee, Wyandotte and British ambush at Blue Licks. That wing actually pushed forward and made headway before being obliged to retreat as the right flank and center was routed.

An Indian rose from behind a stump to get a clear shot at Boone. The frontiersman shouted “Be there!” as he fired his fowling piece and the heavy charge put the warrior down. Boone later said this warrior was the only Indian he was certain of killing in his long career on the frontier.