Last spring, a collector who owns a pair of rifles that once belonged to the great African hunter Frederick Courteney Selous paid a whopping sum at auction for a walking stick presented to the South Africa pioneer by British imperialist Cecil Rhodes on the occasion of Selous’ 42nd birthday. The head of the stick is engraved with a tribute from Rhodes and dates December 31, 1893 — the year that Selous served in the conquest of Matabeleland in what became Rhodesia and is now Zimbabwe.

A couple of years earlier, Selous had scouted the route of the Pioneer Column as it built a road into Mashonaland. Selous’ role in the pioneering of Rhodesia in the 1890s resembles Daniel Boone’s cutting of the Wilderness Road into the heartland of Kentucky in 1775. Like Boone, Selous was a great hunter and explorer — and a warrior only at need.

A story on the walking stick auction appeared on the Sporting Classics website.

Bill commented that the walking stick would make a great conversation piece at his home in Alabama.

“I first heard about this item when I visited Holt’s Auctioneers’ booth at the Safari Club International Convention in Vegas last January. Selous is the most famous African hunter of all time, so the provenance of this item really captured my imagination. I already own two of Selous’s rifles so adding this walking stick to my collection was a must. I was going to buy it one way or another.”

I love walking sticks and staffs. I’ve wielded one since I was 11 years old and first read “The Hobbit.” Ever since, a walking stick or staff has seemed to me to be mandatory equipment for walking in The Wild. Simon Kenton used a six-foot-tall walking staff in his later years, a substitute for the longrifle he had wielded for decades on the Ohio Valley frontier.

As far as I’m concerned, the world needs more presentations of walking sticks. Perhaps we should launch a movement. Stick It To ’Em (SITE).

I just took a brand-new staff out on its inaugural hike. I’d been using an old alder staff I picked up at Santa Cruz, due to having broken my “unbreakable” everyday-carry (for 20 years) staff. It pains me to confess it, but I let my temper get the best of me and I swung it against a tree in a fit of pique. Not proud of that, but I’m an honest correspondent, so…

Anyway, I acquired the new staff from an outfit in Tumalo called Bentworx, who had a booth at a local art fair. It’s an “inside-out” laminate of poplar — exceedingly light and strong. Me like very much. I doubt, however, that it will ever sell at auction for $22,000… 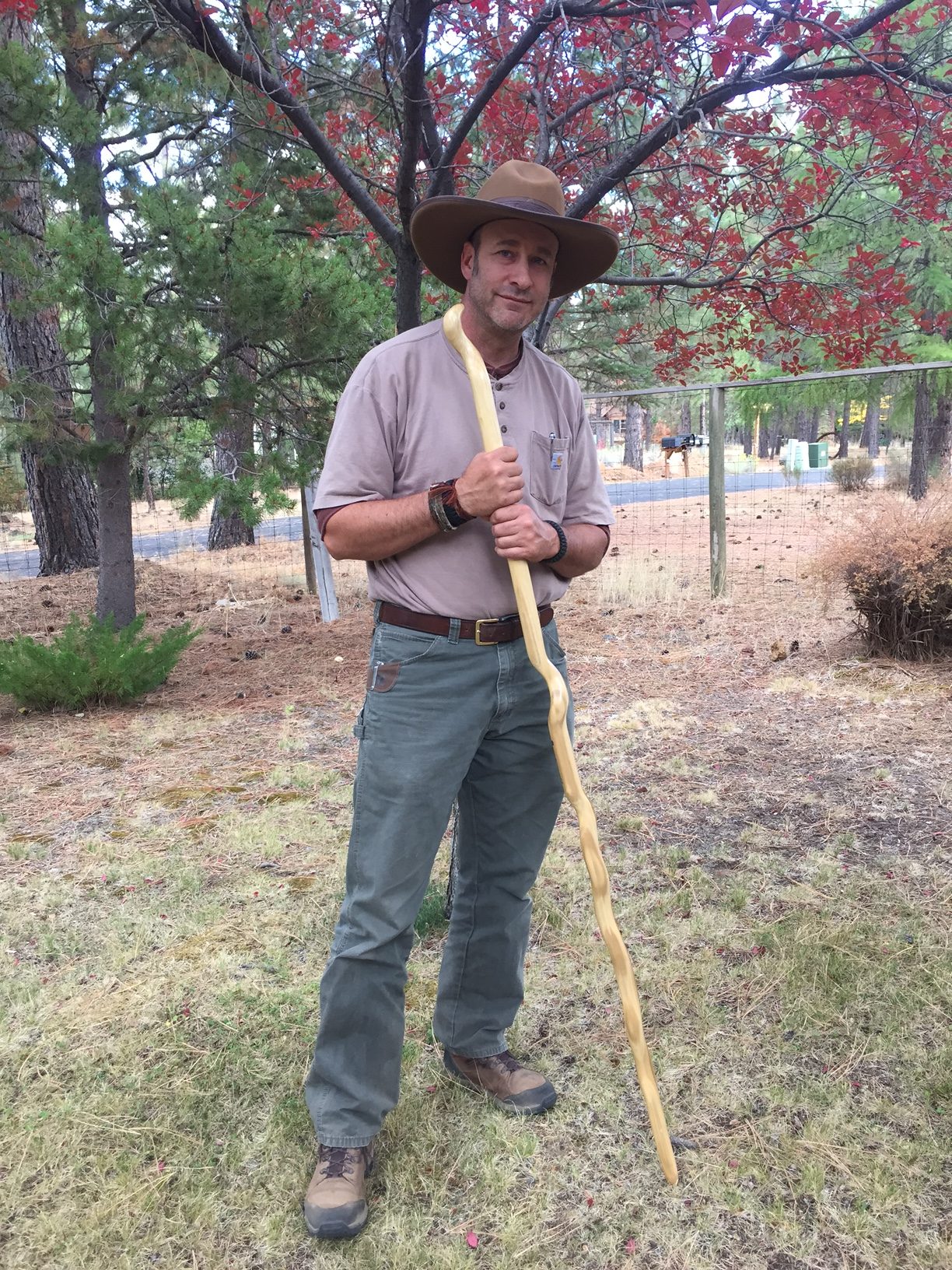