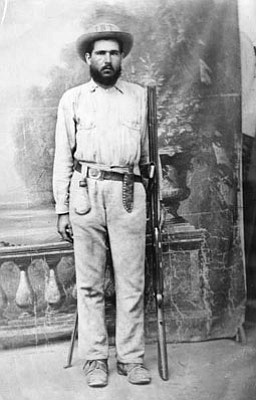 A century after Lewis Wetzel roamed the forests of Virginia and Ohio stalking Delaware, Wyandot and Shawnee, another Indian Hunter shot to prominence in the mountains and deserts of central Arizona. His name was John B. Townsend, and he was a holy terror to the Apaches.

Townsend had a classic Frontier Partisans pedigree: Born in Tennessee, gone to Texas. He was reportedly half Cherokee, which, if true, lent him exactly zero sympathy for other Indians. Racial fellow-feeling was not much in evidence in the borderlands, at least among the native tribes. Scalphunter James Kirker’s right-hand man was Shawnee Spybuck. The tenacious resistance of his own people to white encroachment did nothing at all to stay his hand from lifting the hair of Apaches.

Townsend served briefly in the army of the Confederate States of America, then married 15-year-old Elizabeth Vickers and relocated from Texas to the Arizona frontier in the region of Prescott. He built a ranch on the Lower Agua Fria River and started a family and by 1869 he was a well-respected pioneer settler. He was also quite a hand at killing Apaches.

“He took to Indian hunting as naturally as to ranching, and his reputation spread,” said the great Apache wars historian Dan L. Thrapp.

Townsend seemed to carry an implacable hatred for the Apaches. It’s not clear why. Folklore tells that his parents and maybe some other relatives were killed by Comanche in Texas, and perhaps that engendered a hatred of “savages.” Maybe. Maybe he just had a taste for it.

He had a reputation as a rash and impulsive fighter, and was considered a dead shot.

The Yavapai and Tonto Apaches were a legit menace to the settlers of central Arizona. Operating in small family groups, warriors stole stock and corn out of the fields, and they frequently ambushed and killed lone travelers or unwary parties of white prospectors. Townsend was often a member of counter-raids, trailing Apache raiders into hidden rancherias and attacking them. He was skilled in fieldcraft and tracking and served these civilian posses as a scout. In one incident, Townsend led a posse to an Apache rancheria and plunged in headlong, killing three Indians before the rest fled, leaving four babies behind.

Townsend couldn’t bring himself to kill them. Years later, a friend wrote in a letter that thoughts of his baby daughter Ora stayed Townsend’s hand. The Indian hunters tied the cradles between two trees, and overnight they disappeared The Apaches had returned for their children and slipped away in the darkness.

“Until this time, Townsend had been like many an Arizona Indian hunter, indulging in the ‘sport’ for its own thrills, but now he began to change and, judging by his record, the killing of Indians became almost an obsession with him. He hunted them because he wanted to kill them more than he wanted to do anything else. When others would go along, a grand expedition could result; when they didn’t, he went alone.”

If that all sounds familiar, Thrapp thought so, too.

“He became the Lewis Wetzel of the Arizona frontier…”

Like Wetzel, Townsend got crossways with U.S. military authorities. He was fired from a position as a scout General George Crook’s Tonto campaign, for reasons unknown. It may have been a matter of breaking away from the troops to pursue the Indians on his own. Townsend was no Al Sieber, who was every bit as deadly, but capable of working in a disciplined fashion with Apache scouts. Townsend was not that man.

He was, however, perfectly happy to lead civilian posses in what amounted to massive hunting parties. One such expedition got underway in early June 1871, after a local ranch was struck by raiding Tonto Apaches, who killed a rancher and made off with 137 head of cattle. Pursuing the raiders through exceedingly rugged terrain, Townsend located a well-concealed rancheria, and his rangers charged into it, shooting everything that moved. Townsend dismounted so as to draw a more careful bead. A wounded Apache lying up in the brush nearly did for him, but a friend named Jeff Davis shot the warrior and gave Townsend his gun. The posse of rangers pursued the fleeing Apaches into the brush and ran into another rancheria, where another spate of killing occurred. 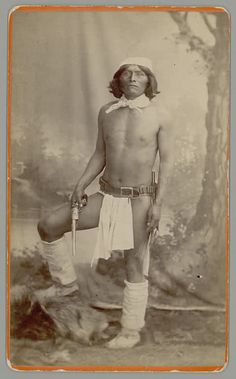 A Yavapai or Tonto Apache. J.B. Townsend slew dozens of these people.

Townsend lifted 15 scalps in the running fight. In total, the posse claimed 56 slain Apaches. When they rode ragged and exhausted into Prescott, the town erupted in a celebration that would go down in history as the Prescott Jubilee.

Thrapp recounts with some sarcasm that:

“The festivities continues as long as anyone could keep his feet, and the heroes staggered home full of wine, whiskey, meat and other good things, and the warm recollection of fifty-six Indians fully reconstructed and no one could guess how many others wounded mortally but escaping to a lingering death in the wilderness.”

The city fathers of Prescott were so enamored of Townsend and his exploits that they presented him with an engraved Henry Rifle (the AR-15 of its day) and 1,000 rounds of ammunition they figured he would put to good use. An engraved silver plate in the butt read:

By the Citizens of Prescott

HONOR TO THE BRAVE!

Townsend often prowled the ridges around his ranch alone, cutting for sign of Apache raiders and laying ambushes for them. Lone Apache hunting was mighty dangerous, and Townsend’s luck finally ran out.

On Sept. 16, 1873 Townsend set out to trail a band of Indians who had raided his home fields. In later years his daughter Clara said his last words to his family were, “don’t go any farther than the fields.” He never came home again.

Townsend had evidently just finished eating his lunch that day when Indians ambushed and killed him. His horse Jerry remained with him for three days before returning the 10 miles to the ranch.

Fellow scouts followed the path the horse had taken and discovered Townsend’s body. They buried him where he died, but friends later removed his remains and took them to Prescott, where he received a Masonic burial. Townsend was 38 years old.

The Prescott Daily Miner in its account of Townsend’s death said, “He died as he lived — the bravest, most daring white man that has ever trod the soil of Arizona.”

J.B. Townsend clearly reveled in his role as a famous Indian Killer.

“I am well-known here,” he said. “There is not a man in Prescott but what is acquainted with me.”

He cheerfully kept score of his kills, which numbered in the dozens, and once graciously “gave” his kill to a fellow ranger when it looked like both of them shot the Apache. Clearly, he was highly regarded in his community; Arizonans, like the settlers of northwestern Virginia in Wetzel’s day, saw Indians as a barely human threat to be eliminated by any means necessary. And if a fellow had a good time doing it, well… why not?

While perhaps not quite as strange and dark a figure as Wetzel, Townsend remains an unsettling ghost from a bloody-handed past. Killing was part of living in frontier Arizona — but maybe John Benjamin Townsend just relished it too damn much.