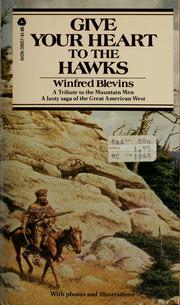 Back when I was a mere stripling I spent hours trolling the shelves of Bob’s Valley Bookstore in the old hometown. It was there that I first saw the Frazetta covers on the old Conan paperbacks I would soon steal from my brother (OK, he let me read them). The racks held all kinds of pulpy goodness, like John Benteen’s Sundance books.

And there I saw a paperback with a picture of a buckskinned man on horseback, rifle cradled in his left arm, riding down a rocky slope (it was done by the Western artist Frank McCarthy, whose work appeared in a whole bunch of Louis L’Amour calendars). The title was “Give Your Heart to the Hawks: A Tribute to the Mountain Men.” The author was Winfred Blevins.

Now, back then, I didn’t know much at all about the mountain men or the Rocky Mountain West. I knew a great deal about the Kentucky frontiersmen of the late 18th Century, and I knew plenty about the post-Civil War Wild West, but everything in between was pretty much a blank space on the map. I’d seen “Jeremiah Johnson” (the first movie I saw in a theater), but I was just seven or so and I didn’t follow up.

Anyway, “Hawks” intrigued the hell out of me and I hied off to the library and tracked the book down — and devoured it in great big juicy chunks, like a mountain man feasting on a buffalo. Stories of legendary proportions, told in a colloquial style that felt like they were being told around a campfire. John Colter’s run from the Blackfeet; Hugh Glass’ epic survival crawl after being mauled by a griz and left for dead; cat-and-mouse with the Blackfeet…

And the “interludes” about the life of the Free Trapper: Man, that was the life. There was even a chapter on “Mountain Mating” that required several readings. Hey, I was like 13 or 14!

This was all right in my wheelhouse and it led to further explorations — Ruxton’s “Life in the Far West,” A.B. Guthrie’s “The Big Sky” Vardis Fisher’s “Mountain Man” and Thorpe and Bunker’s saga of Liver-eatin’ Johnson.

For a time, I harbored ambitions of running off to Alaska or the Canadian Rockies — somewhere — to live the life of a Mountain Man. That dream never died — it just ended up being modified to fit the 21st Century.

A couple of days ago, I stumbled across a fresh edition of “Hawks,” with reflections from Win Blevins on the 30-year-plus life of his opus. He’s written a bunch since, but that one was the big one. And it still holds up. For some reason, I’d kind of forgotten about the book and it was great to crack its pages once again. There was a palpable pang of nostalgia — and a sense of rediscovery. I still love reading those old tales, though they are no longer fresh. Hell, I know ’em all by heart — they have a patina like a rifle gets after years of handling and hard use.

“Give Your Heart to the Hawks” helped spawn the “buckskinning” subculture and it shone a spotlight on a then-little-explored corner of American history. And it kindled dreams. That’s a pretty good legacy for any storyteller.