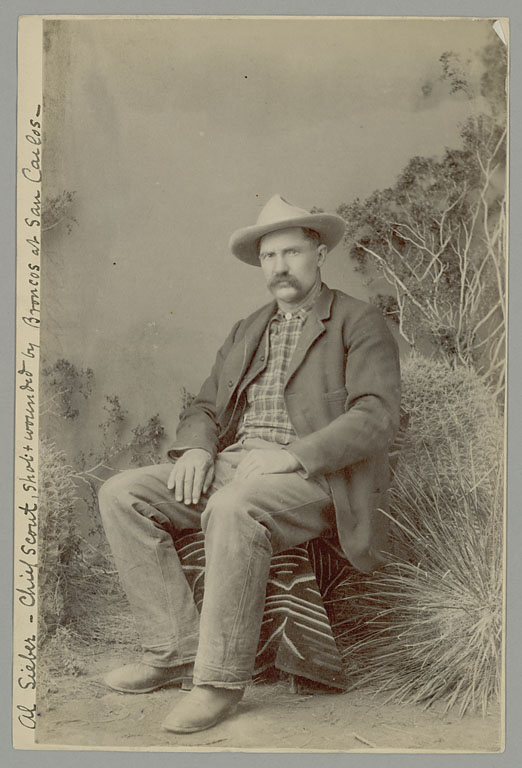 Al Sieber was a rough man, but a straight-shooter in every sense of the term. He is among the greatest of the Frontier Partisans.

Serving as Chief of Scouts through the Apache Wars in Arizona Territory in the 1870s-80s, Sieber compiled a record unsurpassed in the annals of the Frontier Partisans.

His greatest talent lay in working with Apache, Walapai and Yavapai scouts. In the parlance of modern-day special forces, he was a force multiplier, working with indigenous contingents in a guerilla warfare setting. And he was the best there was at the job. He could motivate his scouts when no one and nothing else could. And he had the respect of his foes, too, be they Apache insurgents or brewers of illegal hooch. His success was based on simple principles of respect and brutal honesty. As Sieber himself put it:

German-born, Minnesota-bred, Sieber served in the Union Army in the Civil War, in the cauldrons of Fredericksburg, Antietam, Gettysburg (where he took one of his many wounds). He migrated West after the war, ending up in California. He transported a herd of horses to the Arizona Territory, where he found his destiny. He learned the craft of scouting under Arizona pioneer Dan O’Leary. Sieber’s career was long and storied. We’ll let one episode paint the picture of his competence as a leader, his ferocity and skill as a fighting man and his general badassery.

In 1881, the Army botched an operation to quell what officials feared was a messianic uprising centered around a shaman called Noch-ay-del-klinne who was based along Cibucue Creek northwest of Fort Apache in east-central Arizona. The army’s attempt to suppress the movement turned into a firefight and a mutiny among some of the command’s Apache scouts. A contingent of militant Apaches headed north into the Tonto Basin. For a time, things were quiescent, but in July 1882, multiple commands of the U.S. Army converged on the basin to root the militants out.

When we think of the Apache Wars, we think of deserts and red rock canyons. The 1882 campaign was conducted in forested mountains and meadows. As the troops pursued the militants deeper into the rugged wilderness, the native scouts became more and more reluctant to close with the enemy. They didn’t like the terrain, which was perfect for ambuscade. The scouts protested that the insurgents were too far ahead to be overhauled and that they should give up the chase. The Army officers could not budge them. The rough German stepped in and, in the words of Lt. George H. Morgan, “Sieber, in his abrupt way, started them along pronto.”

Al was a lead-from-the-front man, and on the afternoon of July 17, he and his scouts located the hostiles, who had set an ambush along a canyon rim on East Clear Creek. Had they remained undetected, the whole joint command might have ridden into a nasty trap. A long-range firefight erupted, with the Apaches and the troops taking potshots at each other from timbered ridges 700 yards apart — extreme range for the Springfield rifles and carbines that would have predominated in both forces. A heavy .45-70 slug drops like a rock at long range; shooting at 700 yards at targets you can’t really see is a spray-and-pray proposition. The troops and scouts would have to close.

Acting commander Major Adna Chaffee detailed Sieber and Lt. Thomas Cruse to take a contingent of scouts supported by two troops of cavalry (dismounted) on a flanking maneuver to the right, across the canyon to take the Apaches from the rear.

Lt. Morgan asked Chaffee to allow him to make a similar maneuver to the left, but Chaffee doubted the scouts would fight for Morgan as he knew they would for Sieber. However, realizing that a move to the left would pressure the hostiles and support the flanking maneuver from the right, Chaffee relented and sent Morgan out under the command of Captain Lemuel Abbott.

Meanwhile, Chaffee’s troops in the center kept up their fire on the distant Apache redoubt.

“Far down the canyon, Sieber and the other flankers had gained its floor. Bright sunlight had been on them when they started down, but so narrow was the defile at the bottom that someone gasped, pointed upward, and all peered at the unrivaled spectacle of stars shining in broad daylight. But there was little time to enjoy the sight; the hard-bitten little party scrambled breathlessly up the other wall, arriving in a beautiful, park-like pine forest with little or no underbrush.”

Sieber, the scouts and the troopers moved forward and ran into the hostiles’ pony herd. At just the right moment, the horse guards were distracted by the eruption of a firefight off to their right, as Lt. Morgan’s flankers ran into a flanking party of insurgent Apaches.

Sieber and a Lt. West opened up on the pony guards and wiped them out. The scouts took custody of the horses and moved them out.

The flanking maneuvers worked perfectly, sweeping around the hostiles and putting them in a trap.

Al Sieber, believed to be armed with a Winchester Model 1876 in .45-75 — powerful and rapid-firing — took a severe toll on the insurgents. Lt. Cruse recounted Sieber’s actions:

“Our men and Sieber wiped out that whole bunch of hostiles and we pushed on. Sieber was still beside me and I saw him kill three of the renegades in quick succession, as they crept toward the edge of the canyon to go over and away from the battle.

‘There he goes,’ he would grunt at me.

With the report of his rifle, an Indian I had not seen would suddenly appear, flinging up his arms as if to catch at some support. Then under the momentum of his rush he would plunge forward on his head and roll over and over. One man shot at the very rim plunged over and it seemed to me that he continued to fall into the shadows for many minutes.”

Darkness fell over the battlefield, followed by a tremendous thunderstorm that covered the ground with inches of hailstones, burying the dead in ice and bringing misery to the wounded.

The official bodycount was 16 Apache militants, though it is likely that many wounded crawled off to die in the forest and rocky crevasses. By all accounts, Sieber accounted for six to eight of the hostiles with his rifle.

One scout and one regular trooper were killed and there were several wounded.

The Battle of Big Dry Wash, as it came to be known, was the last full scale battle between Apaches and the U.S. Army on Arizona soil. Sieber would over the next four years continue to lead his scouts, often chasing Geronimo into Mexico. He would also police the San Carlos Agency, busting up tiswin brewing operations and trying to keep the peace among a warrior people whose sun was setting.

Occasionally, he turned his hand to prospecting.

But Al Sieber’s true calling would ever be as Chief of Scouts, a progenitor of modern special forces and among the greatest of the Frontier Partisans.

Note: Bob Boze Bell, publisher of True West Magazine, has a nice blog entry on a visit to the battle site, replete with photos. Find it here. The magazine published one of its “Classic Gunfights” pieces on the Battle of Big Dry Wash in August 2007. I read it when it came out, but I don’t have the issue. It’s worth tracking down.

Apparently there was a bit of a kerfuffle about its accuracy, which Bell and his historical consultant Dr. Sam Palmer address in detail here. It’s an interesting exchange and one that shows the passion that this old history can stir in the hearts of men. I love that. 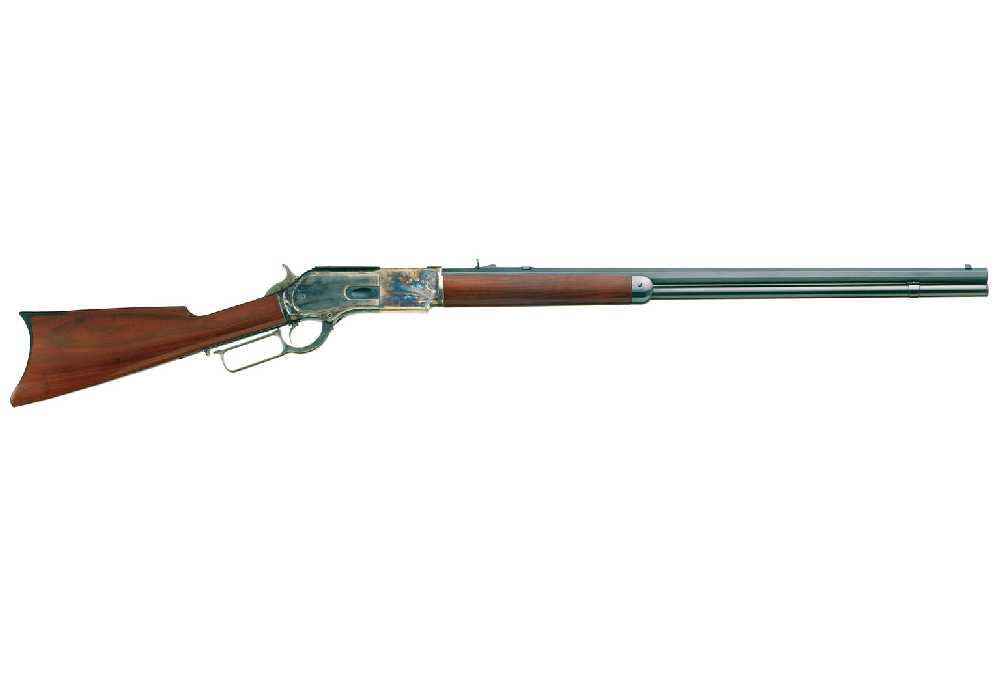 The Winchester 1876 rifle (here a Uberti reproduction) was big medicine in the hands of an expert rifleman like Al Sieber. He used it to kill as many as eight Apache militants in the Battle of Big Dry Wash — half the Army’s body count in the fight.