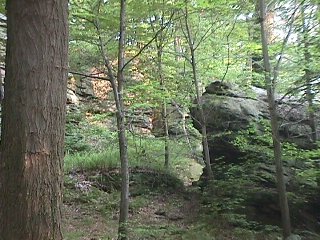 The French and Indian War was sparked by a killing in this forest glen in Pennsylvania on May 28, 1754.

May 28 marks the anniversary of the Jumonville Affair, in which a young George Washington ambushed a party of French soldiers and Canadiens in Pennsylvania. The French leader, Joseph Coulon de Jumonville, was assassinated by Washington’s Mingo ally Tanacharison, the spark in the pan that would touch off America’s first world war — known as the French and Indian War. Thanks to the excellent Flintlock and Tomahawk blog for the historical note.

Today is Memorial Day in the U.S., a day to honor the fallen of America’s wars. The day was designated in the wake of the carnage of the Civil War. In the context of this blog, it seems appropriate to observe the day with a particular remembrance of the thousands of men, women and children who fell in the centuries-long struggle for the land.