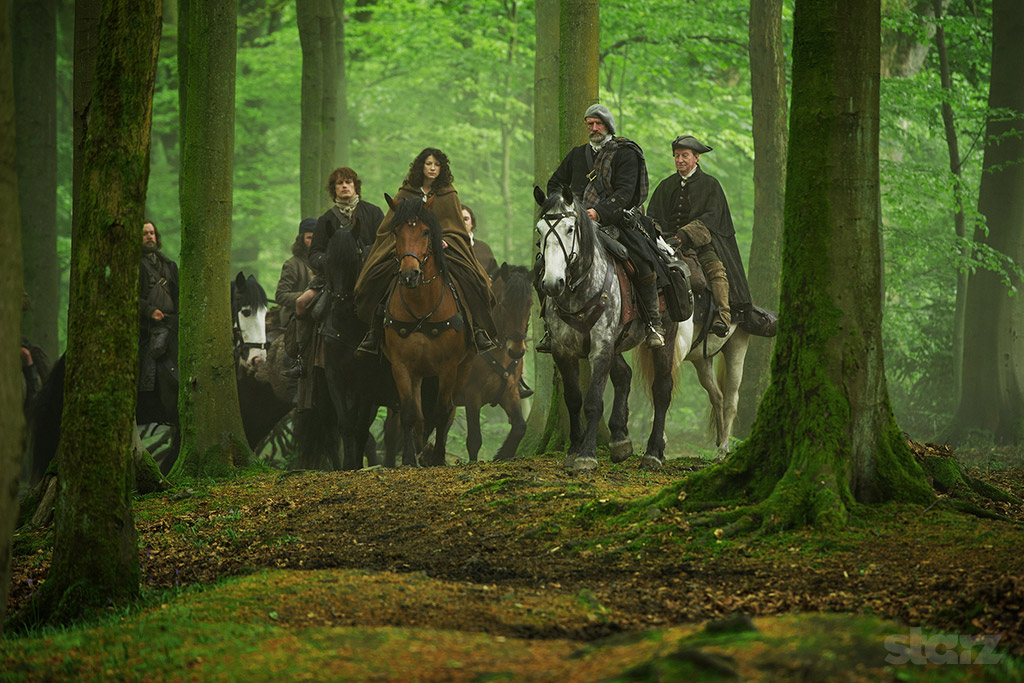 Scotland’s green glens in an age of rebellion.

I must confess: I have fallen rather hard for Claire Elizabeth Beauchamp Randall Fraser. Who is this most singular woman of many names? She is the protagonist of the STARZ series “Outlander.” Season 1 of said show is currently streaming for free, and I’ve been staying up too late and getting up too early to squeeze in episodes.

I had, of course, been aware of Diana Gabaldon’s series of giant doorstoppers for years. My brother and his wife both read ’em and were sufficiently taken by their setting to take a vacation in Scotland. They’re far from alone in that. In fact, Gabaldon — and now the show made from her books — are probably responsible for several percentage points worth of uptick in the Scottish tourism economy.

The premise goes like this: Claire Beauchamp Randall is a World War II combat nurse, on a second honeymoon with her intelligence officer/historian husband Frank Randall in the Scottish Highlands in the post-war fall of 1945. Visiting a circle of standing stones, Claire falls through a portal backward through time, into the year 1743, just as Jacobite intrigue is beginning to roll toward the final great uprising of the Highland Clans in support of Charles Stuart, the King Across The Water. Of course Claire knows what will happen on Culloden Moore on April 16, 1746. That knowledge becomes a torment. Turns out that warning ardent rebels that their cause is doomed — but you can’t tell them how you “know” this — is a dicey business.

Gabaldon’s difficult-to-categorize mash-up of fantasy, romance and historical fiction became a publishing phenomenon, with a legion of exceptionally devoted fans (mostly, but not entirely, women) and spawned this STARZ show. 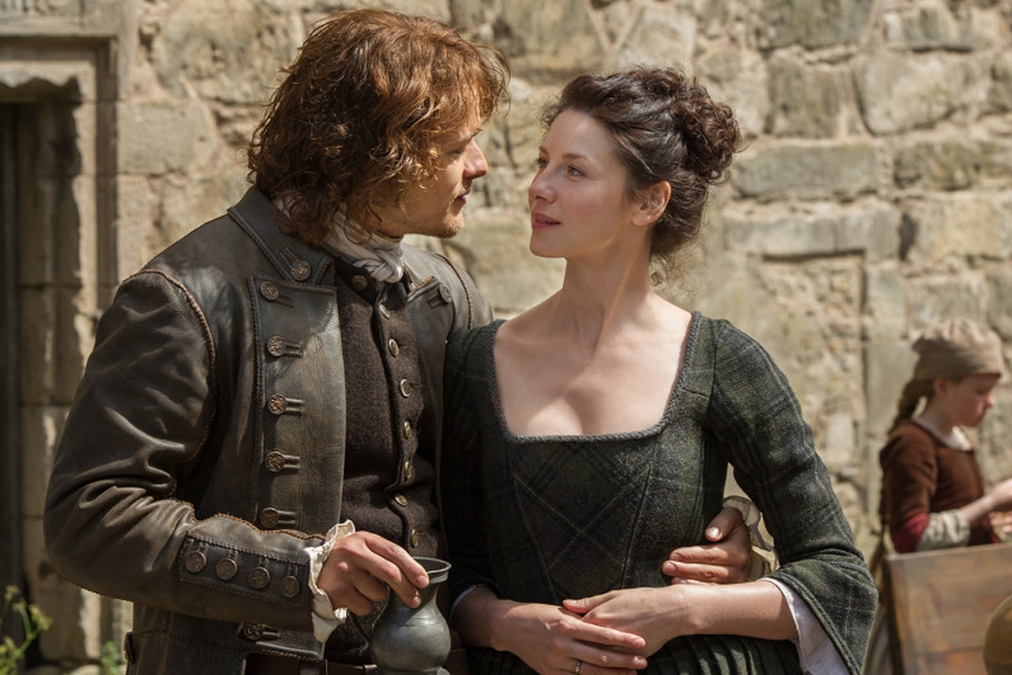 ‘Outlander’ is, at its heart, a romance, a challenging love affair between Claire Beauchamp Randall and the young Highlander Jamie Fraser. It’s a chick-flick that men can thoroughly appreciate.

I’m impressed. I have no idea what kind of budget these shows work with, but like STARZ’s other 18th Century original, “Black Sails,” a big percentage of it is up on the screen. Whether it’s the Scotland of 1945 or the Highlands of 1743, it feels lived-in and real, full of natural beauty — and, in the 18th Century incarnation, danger and grit and blood and horseshit.

The conceit of having a 20th Century woman flung into the 18th Century Highlands allows Claire to function quite brilliantly as a mediator between a modern viewer and an archaic culture. I get a real kick out of the musical cues for an unspoken interior dialogue: When Claire is pining for her 20th Century life and husband, the soundtrack slides into 1940s-era popular music, which clashes hard against the 18th Century visuals. Invariably, Claire is jarred out of her Big Band reverie by an intrusive new reality. What a clever way of conveying her emotional circumstances!

The Highland Clans constituted one of the great frontier cultures of the world — clannish, honor-driven and honor-bound, whiskey-soaked and replete with all the warrior virtues and vices. Claire’s reactions to the strangeness of her new world feel very authentic. She’s a combat nurse and has seen more than her share of the results of man’s inhumanity to man. She’s not squeamish and she handles the horrific aftermath of a Highland boar hunt gone wrong with aplomb, winning the respect of a hardened clan war chief.

Yet, she has the modern sensibilities that recoil at a culture that sees nailing a kid’s ear to a pillory as a fit — even gentle — punishment for theft, one that retains a superstitious dread of  demons and spirits and the very real presence of Old Nick. She can’t help judging things she does not understand, and it leads her to misinterpretations of motives. As she gains understanding, so does she gain a certain affection for and allegiance to the doomed clansmen of The Mackenzie. 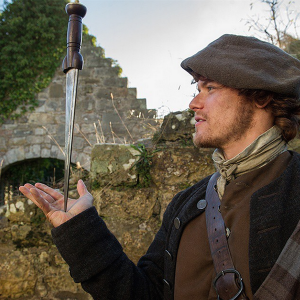 The material culture of the Highlands c. 1743 is well-portrayed and feels authentic and lived-in.

Claire (played by the absolutely riveting Caitriona Balfe) is is a strong, smart, adaptable heroine who readily carries the story. And she’s proof that a woman can write a strong female protagonist without resorting to caricaturing the men in her world as malignant tyrants or hapless bumblers. Well done, Ms. Gabaldon, well done.

Claire is assertive in a modern way that is unsettling, annoying and occasionally comical in her 18th Century surroundings, but there’s nothing arch, hip or ironic about any of it. She’s strong and capable, but in a realistic way — no outlandish (sorry) kick-the-boys’-asses capabilities. She’s a woman thrown alone into a very dangerous world, and she requires male protection, which is both upsetting and comforting to her.

Her capabilities as a nurse — a “healer” — are of obvious value in a rough culture where injury and wounding is common, along with illness and disease. Yet her skills also bring suspicion upon her, because her 20th Century knowledge and expertise is beyond the ken of the Highlanders.

While Claire is repelled by some of the rougher aspects of the culture in which she finds herself immersed, she also finds much to respect and admire. How can you not love a heroine who gamely sits down to “waulk wool” with a bunch of singing, tippling Highland women, immersing her lovely, long-fingered 20th Century healing hands in a skein of fabric liberally soaked in hot piss?

It’s an earthy tale, as befits its era and setting.

Much has been made of the perception that the sex scenes — marital sex, imagine that — are created for the “female gaze” as opposed to the dominant “male gaze.” Whatever. The showrunner says he just didn’t want to do “TV sex,” which sounds about right to me. The point being that, despite its fantastical premise, “Outlander” manages to feel “real.” The characters act like real people, and the Highland culture is treated as a living thing, not as a museum piece or a caricature.

“Outlander” is a fine, immersive viewing experience. I’m glad I jumped in and I will continue to follow it into its forthcoming second season. Any true Scotsman would appreciate getting it for free, but I’m in, even if I have to pay for it. Besides, it really should be shared with my girls. It’s a chick-flick, after all. Don’t tell anyone. 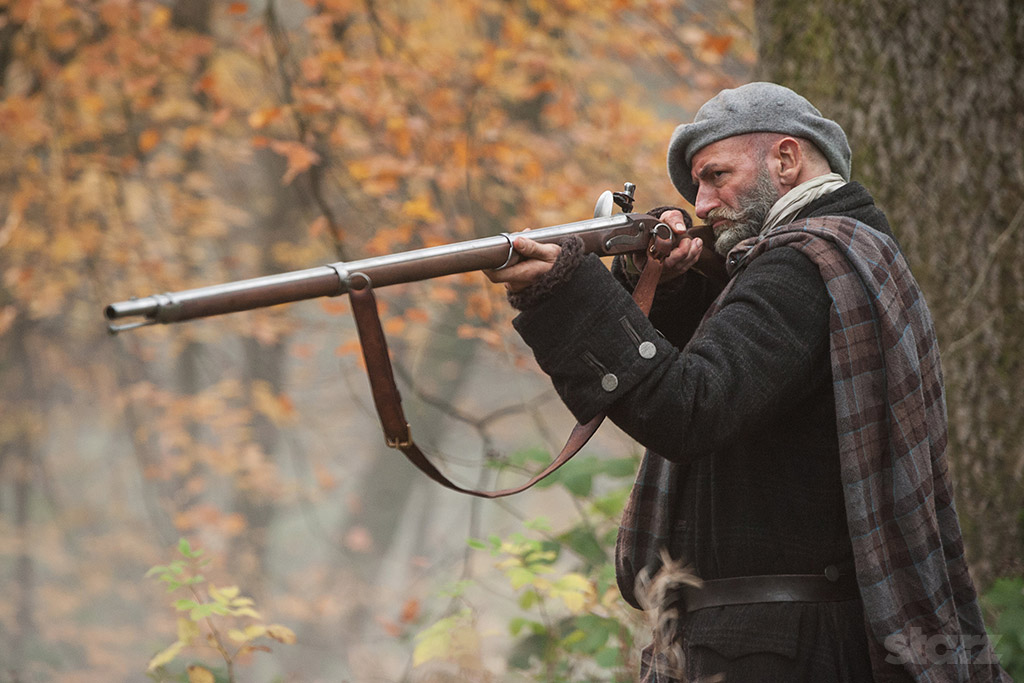 The magnificently-mustachioed Dougal Mackenzie, war chief and Jacobite plotter. Note the French musket, presumably the 1728 pattern. The French supported the Jacobites — including supplying arms —  as a means of discomfiting the British. The arms and equipage of the Highlanders is very well-depicted.