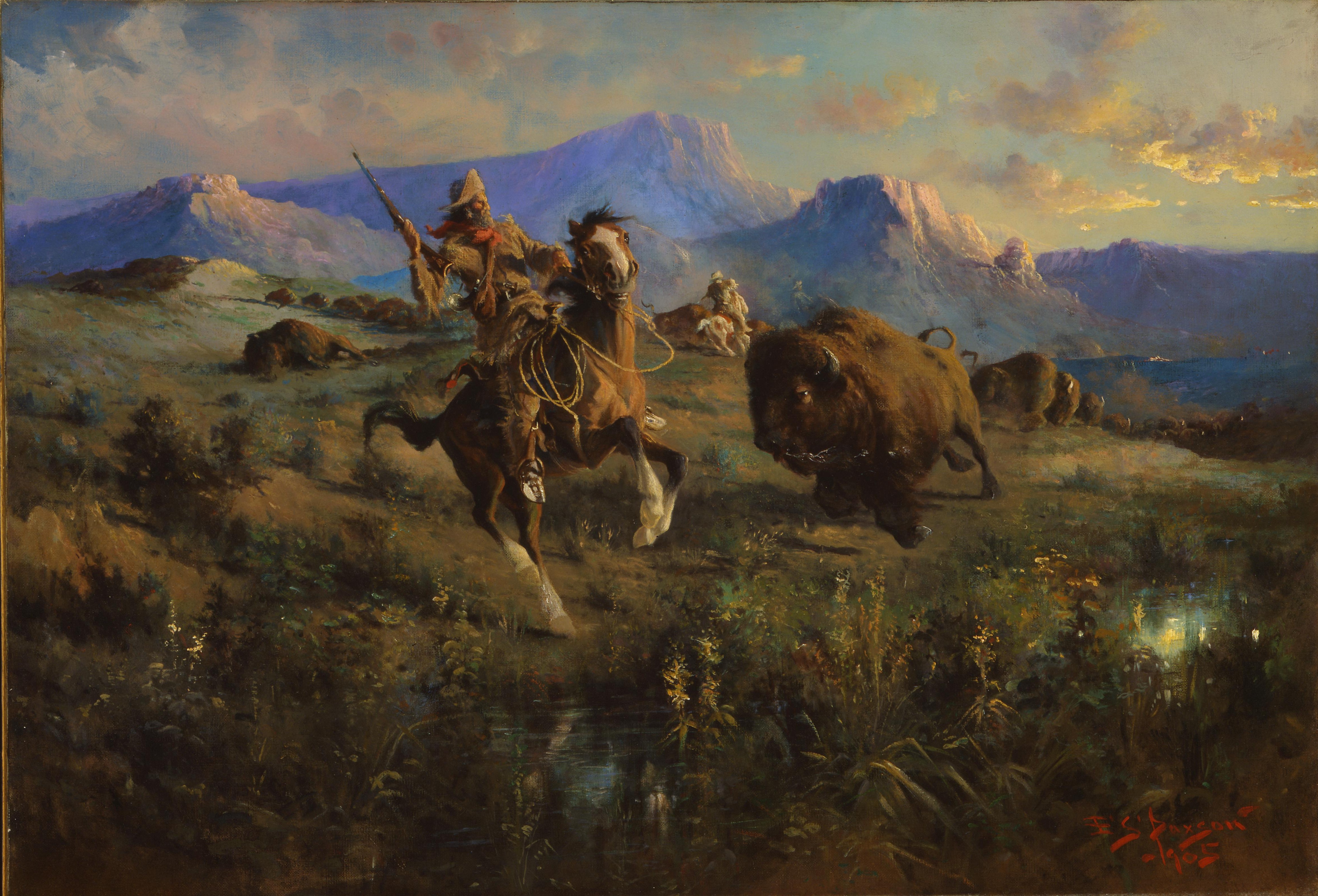 Springtime has busted out here in Central Oregon. Temps have been in the 50s, bumping 60 here and there, and the sun shines glorious over mountains that — finally — have an ample covering of snow. It’s probably a tease, but I’ll take it. There’s nothing like the fecund smell of the woods when the snow melts and the warm breeze blows.

Been getting out in the woods pretty regular, a couple of good hikes, plenty of Frontier Partisan biathlon action.

Of late, I’ve taken to calling this kind of business “Chasing Buffalo.” Owe that to Craig Rullman over at The Bunkhouse Chronicle. He recollected the scene in “Lonesome Dove” where Gus is trying to persuade Pea Eye to join him in chasing a remnant herd of buffalo across the prairie — for the sport of it. I’ve posted it before, but here it is again:

Running around in the woods, slinging kettlebells, pulling a trigger — these things are my regular means of staying in touch with an older, more robust way of being in the world. There’s no practical point in it; it’s sport and it’s part of my ongoing palaver with ghosts. Chasing buffalo. Some do it by pitching a tipi in Alaska and discovering hidden glacial caves; others of us have more modest adventures.

For a short while in my 20s, I thought I’d become a teacher. That turned out to be a blind trail, but I spent some time and money going through the teaching program at Cal State Northridge — supposed to be one of the best in the state of California. Let’s just say that the quality of instruction was uneven. One professor we were forced to endure was a pompous gasbag who contributed exactly zero to our proficiency as prospective educators. He spent every class pontificating about “liberals” and how they were destroying education. He had a point, but only one — and it wasn’t why we were sitting in his class. It was also hard to take his socio-political pronouncements seriously, since his means of achieving success by his bootstraps was to marry a very wealthy woman.

The only thing that made the class bearable was that I shared it with my friend Joe. Joe was in his early 40s then, nearly two decades older than me, reinventing himself after working as a musician and a bouncer for years. Joe was a six-foot-tall, 300 –pound biker, originally from New York, and he had memorized “The Godfather” and “The Godfather Part II”, and he could do all the parts in the right accent and everything. He was a gun nut, a history buff, and his size, accent and biker-booted persona intimidated the crap out of everyone — though he was, in fact, one of the sweetest men I’ve ever known.

So one day Professor Lazybones was on a riff on his usual subject, and I’d had enough. When he told the class that we were all socialists, I stood up in the back of class, slammed my hat down on my desk and proclaimed theatrically: “I take exception to that statement, sir! I am no socialist — I am a Romantic Anarchist!”

Professor Lazybones just blinked at me. Joe bellowed, “Hah! I fuckin’ love it! Me, too!”

It was really just a piece of smart-assery, but nowadays, I’m thinking that I spoke the truth.

I’ve been feeling for some time that we’re headed for a cultural cliff; that The West is in the kind of terminal decline that can’t be arrested and can only end in a catastrophic crash and a thorough reshuffling of the deck. I’m fairly sanguine about this, though I do wish my daughter wasn’t going to have to face the times I see coming.

The question is what to do about it.

Lately, a lot of things have been lining up serendipitously and synchronicity has been clicking like the groove on a Ray Wylie Hubbard tune. Thus, I stumbled upon the Dark Mountain Project — “a creative space in which people can come to terms with the unravelling of much of the world we have all taken for granted, and engage in a conversation about what the future is likely to hold, without any need for pretence or denial.”

This came by way of Paul Kingsnorth, the author of “The Wake.” I was most intrigued by what he was doing with his tale of mayhem on the frontiers of Anglo-Saxon England, and by his close-to-the-land life way in the west of Ireland. Turns out, he is one of the founding authors of The Dark Mountain Project. I started reading about it. I find much that resonates in their project to “Uncivilize” through Story, and also through the way each chooses to live. Hell, I’ve always been drawn to the rough edges, right? A Romantic Anarchist.

This from the Dark Mountain Manifesto:

There is a fall coming. We live in an age in which familiar restraints are being kicked away, and foundations snatched from under us. After a quarter century of complacency, in which we were invited to believe in bubbles that would never burst, prices that would never fall, the end of history, the crude repackaging of the triumphalism of Conrad’s Victorian twilight — Hubris has been introduced to Nemesis. Now a familiar human story is being played out. It is the story of an empire corroding from within. It is the story of a people who believed, for a long time, that their actions did not have consequences. It is the story of how that people will cope with the crumbling of their own myth. It is our story.

Being of somewhat maverick tendencies, I’m not given to being stirred by manifestos — but this is a manifesto for fellow mavericks, and I like it. I like, too, the “Eight Principles of Uncivilisation.”

‘We must unhumanise our views a little, and become confident /As the rock and ocean that we were made from.’

This stirs me. It’s not so much that I wish to “join” The Dark Mountain Project. It’s that seeing what these storytellers have laid out makes me realize that I have been, for some time now, and in the company of some fine folks who share similar sensibilities, been engaged in a similar (if much more modest) project of my own. For “The Frontier” is both history and myth, all around the world, and it is at once part of “the myth of progress” and an atavistic rejection of that myth. The extravagantly exploitive nature of “the frontier” is one of the key problematic aspects of “the myth of progress” — think of the mountain men trapping out the country even as the market shifts and prices drop, searching in desperate, vain hope for one last stream that was like it was in the “old days” just two decades gone.

Not merely to make a buck, but to hang on to a life way they had come to love, or were addicted to.

There are counter-currents. Outright resistance to and rejection of the Victorian notion of progress. And what is for me the most interesting aspect of the Story, the ambivalent and conflicted nature of frontiersmen, who strove so hard to open and tame a land, be it in North America or Africa — and regretted the loss of wildness. Too, there were many, many men whose very lives were a mediation (often ending tragically) between the Myth of Progress and those who stood in the path of that juggernaut.

This is the part that I gnaw on like a buffalo’s haunch: the frontiersman’s paradox. The zest of life is found in the exploration, the exploitation, the conquest, the settling, the civilizing. But the conquered, settled, and civilized is dull and dreary and unrewarding and you can’t stand it, so you must “light out for the territory” and start the cycle anew.

What’s a frontier partisan to do when he’s run out of new frontiers? Time to “uncivilize.” What other choice could there be? It’s Romantic Anarchism.

For me, that means, in part, unplugging completely from the increasingly insane socio-political culture that is fixing to auger in at any moment now. It means focusing my concerns, my considerations, my actions solely around my “tribe” — family, friends — those whom I love, respect, trust. It means affirming and reaffirming my belief in the power of Story and Song to create a world in which I wish to live — writing with dirt under my fingernails. It means a joyful immersion in whatever pleasures of “the strenuous life” I can avail myself of on any given day — sounding my barbaric yawp over the rooftops of the world, and chasing buffalo and palavering with ghosts.

And it means doing everything I can to help those who are engaged in a similar effort.

Like Cormac McCarthy says, I’m pessimistic, but that doesn’t mean I have to be miserable about it. No, mi compadres, on the contrary! Chasing buffalo down a dark mountain is a hell of a lot of fun.