Hereward the Wake. A leader of the resistance to the Norman conquest.

Paul Kingsnorth’s new novel, ‘The Wake’ — a grim tale of medieval conquest and revenge — became a hit against all odds in the U.K. last year, and it’s about to be released in the U.S.

Kingsnorth’s novel is definitely not soft and fluffy. The Wake is set during the Norman conquest, when armies from France swept across England, crushing Anglo-Saxon civilization. It’s sort of a post-apocalyptic tale, set in the 11th century. And it’s also written in a slightly made-up language…

No, I am NOT going to read this book any time soon. No, really, I’m not. Stop looking at me that way…

I already have serious reading to undertake, and I am committed to doing it deeply, with intent — and well. The last thing I need is to take on a challenging read set in the 11th Century and written in a “Shadow Language.” So why am I even bringing this up here?

“I suppose I was probably halfway through it when I thought: There’s no way anybody’s going to publish this,” he said. “I’m writing a book about a period in history no one knows about, in a language no one can understand, with a central character who’s horrible. There’s absolutely no way anyone’s going to touch this with a bargepole, but I don’t care!”

That is a fine war-cry. All of us writers should take it up. 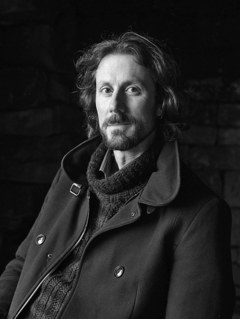 Kingsnorth’s go-for-broke effort paid off huge. “The Wake” is England’s Bookseller Book of the Year. And ain’t it grand that a bizarre publishing world that can make a hit out of dreck like “50 Shades of Grey” can turn around and make a hero out of a writer who burned his boats and set off inland to conquer or die?

As one reviewer notes:

It’s a brave author who launches readers into a completely alien world with an unreliable and often unlikeable narrator who doesn’t quite speak our language as our only guide, but that is what The Wake, by Paul Kingsnorth, does, and it works.

Read the full story to get the dope on the “Shadow Language.” Kingsnorth uses it to create full immersion. And when it’s read aloud, it sweeps you away. Cormac McCarthy is notorious for throwing untranslated Spanish at the reader, along with biblical cadences that sound and feel odd to the modern ear, especially in “Blood Meridian.” But as my friend Pete noted, when you “catch the rhythm,” you are swept along in an unstoppable torrent. That archaic tone, language and feeling creates a totally immersive experience.

Of course I am also intrigued by the setting — the post-Hastings Conquest was a lengthy and brutal affair; medieval frontier warfare. War to the knife and the knife to the hilt.

The book is narrated by Buccmaster of Holland, a man of the Fens relating the events of the Norman invasion. His point of view is highly subjective, and the reader quickly becomes aware that he is prone to exaggeration, not always truthful, often violent, as well as a jealous and defensive man with entrenched beliefs. Yet he is a remarkable character, and utterly believable. The story is very much his own, though it is also the story of a conquered people and the response that the apocalyptic events of 1066 and its aftermath provoke from the English. From the time when Buccmaster’s sons go off to fight the invading French, through the fierce repression of Norman rule with its brutal killings, heavy taxes and oppressive regime, we see the effects on a man who prides himself on his Englishness, who is keenly aware of his own importance as a man with a large house and land to farm, and whose place in the world is literally taken from him. When he loses everything, Buccmaster retreats to the woods, becoming a ‘green man’, like Hereward the Wake of whom the men in the woods hear. From the woods Buccmaster and his motley band fight the French – but we know, of course, that his dreams of reclaiming England for the English are doomed. In fact, one of the ways in which this novel is powerful is precisely because we know the historical outcome; Buccmaster is in many ways a tragic hero, battling hopelessly for his own place in history, hanging on to what he believes in even though every reader will know that this is futile. It’s the fate of Buccmaster himself which keeps the reader in suspense, and the drive of his flawed character which holds a strange appeal.

And I have a hunch that Kingsnorth is simpatico:

Over the years I’ve been called an anarchist, a Tory, a communist, a liberal, a nihilist, a romantic, a misanthrope, a utopian, a crazy collapsitarian, a left wing oikophile, a deep green reactionary, an anti-humanist and – my favourite – a ‘lower middle-class eco-toff’. I’m sure there are some other names I have forgotten.

I’ve noticed that while my politics have changed over the last twenty years, my worldview and my basic principles and inspirations essentially haven’t. I find this interesting. These days, I tend to see what we call ‘politics’ as a slightly more respectable form of primate tribalism: a means of clumsily rationalising deep psychic impulses and then fighting about them. There is very little that is more fruitless than this kind of behaviour. You’re more likely to find truth in science, poetry or the caves of a desert hermit, and I’d suggest you look in all those places first.

Yeah, what he said…

Anyway, yes, “The Wake” will have to wait. But a Frontier Partisans salute could not. Here’s to a bold writer, a wild tale — and a Shadow Language. Mr. Kingsnorth, you are an inspiration.