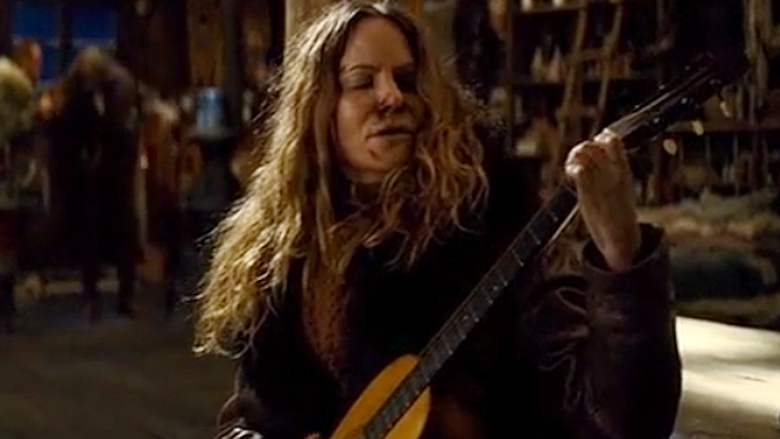 This just hurts — as a historian, as a guitar picker… And just for the record, Quentin Tarantino is an asshole.

Apparently, Kurt Russell didn’t get the memo about the historic Martin guitar that makes an appearance in Quentin Tarantino’s latest film, The Hateful Eight. In the scene, the character Daisy Domergue, played by Jennifer Jason Leigh, is singing and playing the instrument when John Ruth, Russell’s character, decides he’s heard enough. “Music time’s over,” he yells before grabbing the guitar from her and smashing it to pieces against a large wooden support.
The Martin, a model from the 1870s, was on loan from the company’s museum and, according to Mark Ulano, the film’s Academy Award–winning sound mixer, “was priceless.” Six doubles were created as stand-ins for the scene.
“We were supposed to go up to that point, cut and trade guitars and smash the double,” Ulano explains to SSNInsider.com. “Well, somehow that didn’t get communicated to Kurt, so when you see that happen on the frame, Jennifer’s reaction is genuine.”
“Kurt shattered the antique guitar and everyone was pretty freaked out. Tarantino was in a corner of the room with a funny curl on his lips, because he got something out of it with the performance.”
Reportedly, Martin Museum reps took it in stride. According to Ulano, they asked, “Do you need another one and can we please have all the pieces to display in our museum?”

UPDATE: It gets worse. Martin did NOT “take it in stride.” They were given bullshit information and obfustication. Again, Guitar Player:

The makers of Quentin Tarantino’s The Hateful Eight never told Martin Guitars how a historic acoustic guitar on loan from its museum came to be destroyed on the set of the 2015 film.

Dick Boak of C.F. Martin said the company did not learn that the instrument was smashed by actor Kurt Russell until the incident was reported on Tuesday by Reverb.com, an online marketplace for gear. That story was itself based on an interview with the film’s sound mixer, Mark Ulano, that ran on SSNInsider.com.

Boak, director of the museum, archives and special projects for C.F. Martin & Co, said the company was initially told the guitar had been damaged in an accident on the set. “We assumed that a scaffolding or something fell on it,” Boak told Reverb.com, in response to its story.

“All this about the guitar being smashed being written into the script and that somebody just didn’t tell the actor, this is all new information to us,” Boak said. “We didn’t know anything about the script or Kurt Russell not being told that it was a priceless, irreplaceable artifact from the Martin Museum.”

As a result of the incident, Boak said Martin will no longer loan guitars to movies “under any circumstances.”