“You can find meanness in the least of creatures, but when God made man the devil was at his elbow. A creature that can do anything. Make a machine. And a machine to make the machine. And evil that can run itself a thousand years, no need to tend it.”

As someone who has barely made it into the 20th Century, much less the 21st, I have decidedly mixed feelings about the advent of the RoboRifle.

TrackingPoint Solutions of Austin, Texas, has created a precision-guided rifle using jet-fighter lock-and-launch technology. It’s a remarkable rifle (actually, it’s all about the scope)  — you can’t help being impressed with the technology and what it can do. The problem is just that though: It’s what the technology can do, not what the rifleman can do. They claim to have “democratized accuracy.” I don’t think I like that.

I’m a pretty good shot. That’s because I’ve made a lifelong study of it and practice a lot. I don’t much care for the idea that a novice can twiddle some knobs and manipulate a computer and shoot better than I can. Reminds me of what a Sierra old-timer told Chuck Yeager: “Four-wheel drive makes things easy that ought to be hard.”

Now, I can certainly see the military application. War is not a sport, and attempting to eliminate human error from the sniper equation makes sense. As long as it works. If the technology fails, does the tech-dependent rifleman have the old-school capability to compensate?

But then, I’m a tech curmudgeon. I prefer iron sights to a scope whenever possible. And I’m pretty sure that The Terminator is actually a historical narrative that hasn’t happened yet. So you can take anything I say on the subject with a stout grain of salt to hand.

Don’t much like the “ethical kills on animals at long-range” business. Where is the “Fair Chase” ethic in a 500-1k-yard computer-assisted shot? Speaking as an unsuccessful flintlock muzzleloader elk hunter, of course… Three trips and nary a shot taken. Grain of salt again. Maybe I’m missing something. I mean, somebody could have — and probably did — make the same argument about “unsporting” technology when scopes started becoming a generally available thing after World War II. Now you can scarcely buy a stock American sporting rifle with irons. (Though there does seem to be a welcome countervailing trend lately).

(Editor’s note: Friend Brett Miller, who operates Warfighter Outfitters, which gets injured and disabled veterans out on the water and into the field points out that long-range technology like this can be used by veterans whose injuries preclude hiking and stalking on the hunt. Legit point and well-taken).

Maybe I’m just turning into a grumpy old man. “These damn kids are talking about Call of Duty and HALO — back in my day we played REAL games, like Centipede!” Grumble, grumble…. “Get your newfangled contraption off my lawn!” Am I really that guy?

Ah, hell, there’s no point in bitching. Technology is advancing at a frantic rate and will continue to do so (until the machines become self-aware and destroy the planet).

As one of the commentators in this video says, “We are committed to the Promethean Fire.” 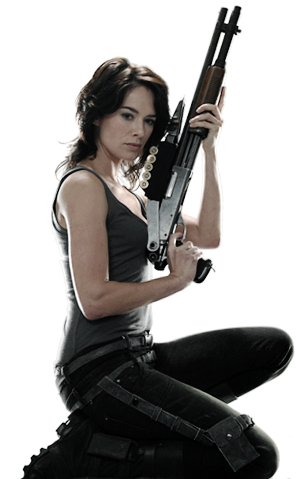 Lena Headey — my favorite Sarah Connor. Even Sarah cannot save us now.