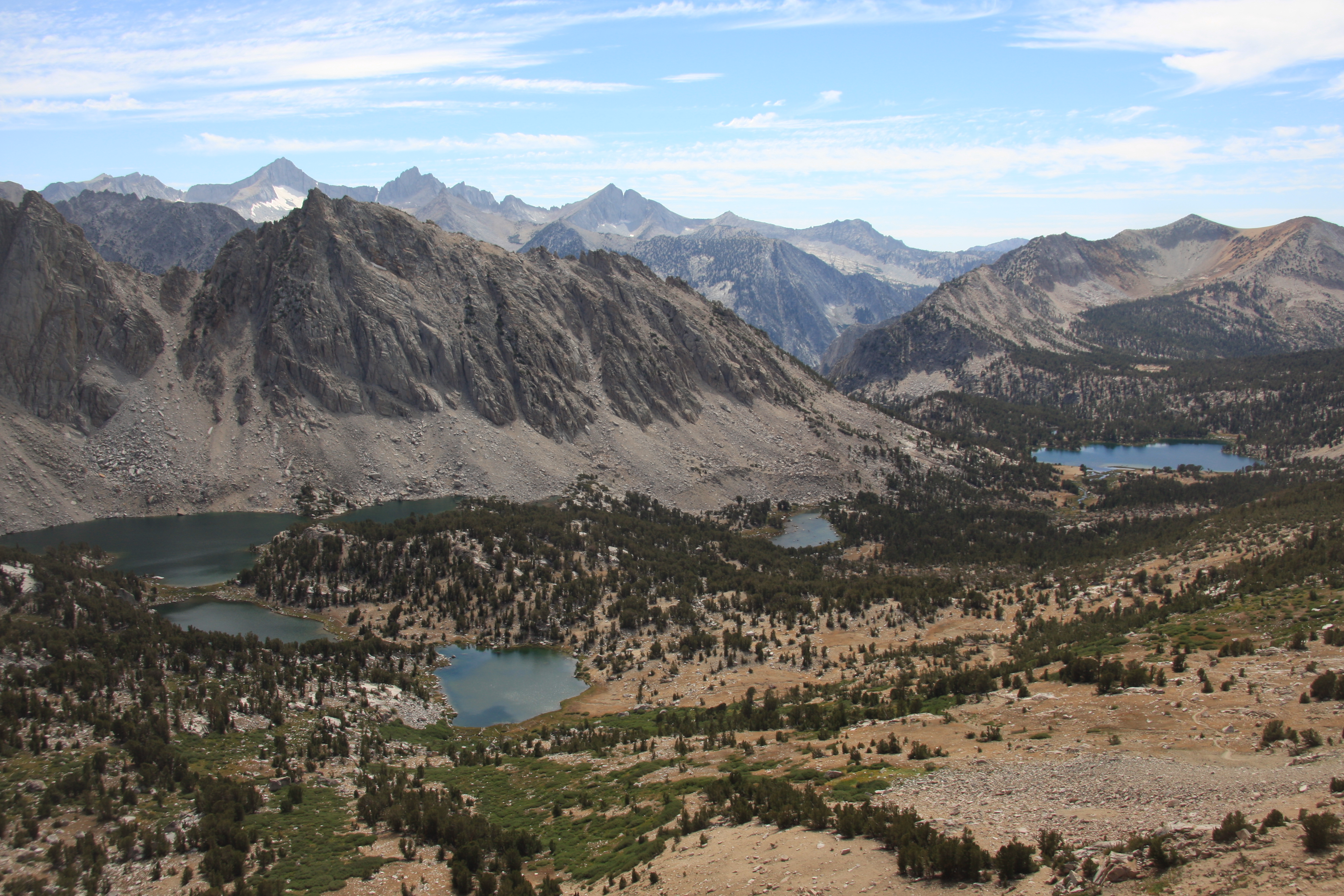 Looking down on Bullfrog Lakes from Kearsarge Pass

Looking back now, over the gulf of 35 years, it probably wasn’t really the best bowl of chili in the history of the universe. But damned if it didn’t seem like it at the time.

For several glorious summers in my teens, I hoisted an awkward external frame backpack and trekked across the Sierra Crest at Kearsarge Pass. A privileged youth, I’d spent lots of time running around in the San Gabriel Mountains, where my parents had a cabin — but these were forays into real mountains. The High Sierra. Above the timberline. Waugh!

I owed the first couple of these experiences to my brother. John is exactly 11-1/2 years older than me. That kind of age gap can be a chasm, but we were close from the time I was a baby and remain so today.

He took me on my first High Sierra trek when I was 13. Up and over Kearsarge Pass at 11,000-plus feet and then over Glen Pass at almost 12,000 into the Rae Lakes Basin, all along the John Muir Trail. It was tough work for a kid, but I loved it. I was so proud of myself that I could keep up with my brother climbing back over Glen Pass. I guess I’d finally gotten acclimatized to the thin, high altitude air — and I felt like I’d done something.

Two summers later, we went back. I was 15, he was 26. He had girlfriends, drank in bars with wild characters who did crazy shit that made for great stories, and he was strong and athletic. I was a skinny high school sophomore, shy and awkward around girls. I dreamed about frontier adventure, played baseball and sucked at algebra. For some reason, he wanted to hike the mountains with me.

By this time he’d acquired a stray shepherd-and-god-knows-what-else bitch he named Tasha, who was one of the coolest dogs I’ve ever known. My sole job prepping for the trip was to call the ranger station in Lone Pine, California, and make sure dogs were permitted where we were going. Got the green light, and off we went.

Up U.S. 395 along the east slope of the Sierra we chugged — in an ancient Volkswagen bus. The Hippie Van. John was not a hippie, exactly — though he had a mane of long hair and a mustache that would have made Emilano Zapata jealous. He had just not quite left the ’70s for the ’80s yet.

The highway was carpeted with the corpses of jackrabbits. Hundreds of ’em, smashed flat in the travel lanes of that long, straight ribbon of highway. Every few yards, thump-thump. It went from a little macabre to completely monotonous after the first dozen.

All the way up the road we listened to tunes on the Hippie Van’s only state-of-the-art feature — a Blaupunkt stereo cassette system. My brother’s and my taste in music diverged pretty wildly back then. I was listening to …. Hell, you know what I was listening to. John punched in Tonio K’s “Funky Western Civilization,” and The Ramones “Beat on the Brat” and The Plasmatics. Totally alien shit to me — though I admit I found some interest in the cassette cover picture of Wendy O. Williams wearing nothing but electrical tape over her nipples. I was 15.

But that stuff only worked when we were still rolling through the greater metro L.A. area. Once out on the high desert of a completely other California, we switched over to Neil Young, and I was properly introduced to the stoned poetry of After the Gold Rush. And, being an indulgent big brother, John finally consented to punch in the Waylon cassettes: Are You Ready For The Country and I’ve Always Been Crazy. He rewound “Whistlers & Jugglers” to hear it again. And again. My career as a Waylon Jennings evangelist had begun.

Roll through Lone Pine, on up to Independence. Left turn and the Hippie Van strained and huffed and puffed up and up and up to Onion Valley, where we parked at the trailhead and slung our sleeping bags down in the dark by the banks of a rushing creek. 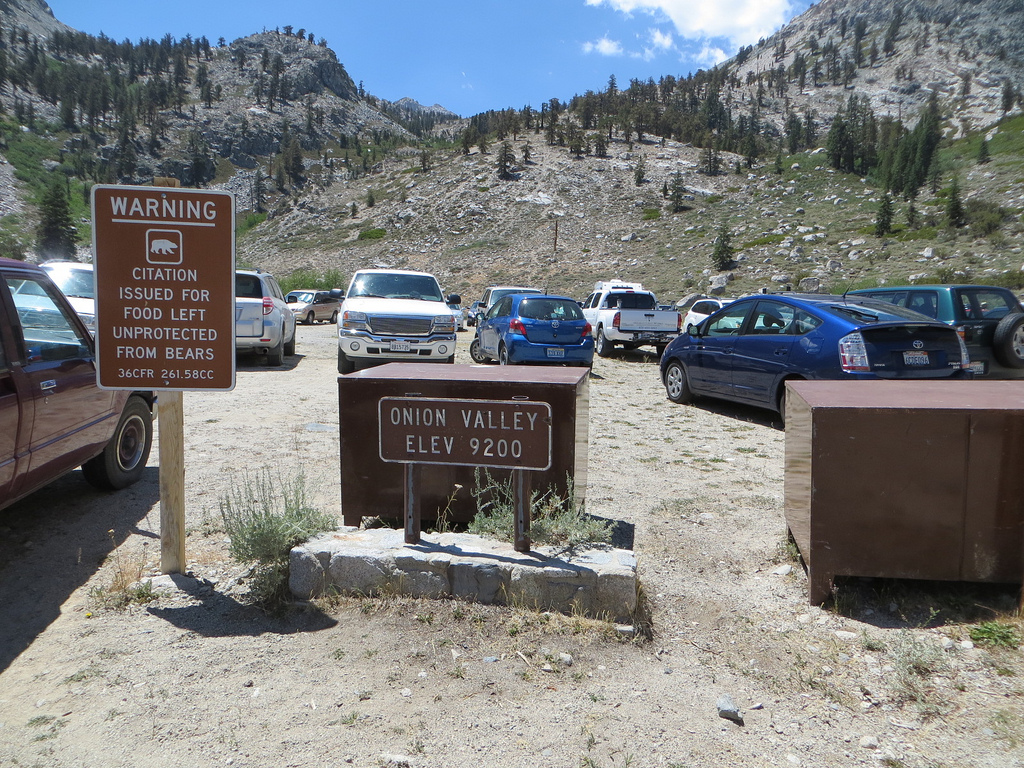 The next morning, we hoisted our packs and headed out, with Tasha doing five miles for our one, chasing marmots on glacial morrains. We made it over Kearsarge Pass, and descended till we came to a nice little copse of trees where we dropped packs and stretched out for a little break, Tasha laying down by our side.

Along comes Mr. Ranger. An open-faced, pleasant fellow who nonetheless told us we couldn’t have our dog here. John gave me that WTF look; I’d checked on this… right? Well, I had… but I hadn’t asked the right questions. Tasha was A-OK in the Inyo National Forest, back on the other side of the pass. Over here in Kings Canyon National Park, she was good for a ticket.

I could feel the red creeping up into my hairline. Shit.

Not a word of recrimination from John. He just brought out the topo map and started to figure out where we could go in the Inyo for the next couple of days.

Back up and over Kearsarge we went, then bent off to the south to an inviting-looking spot called Bench Lake. The topo told us that it was a lake on a granite bench — whatdya know — and it looked like there wasn’t a formal trail in. 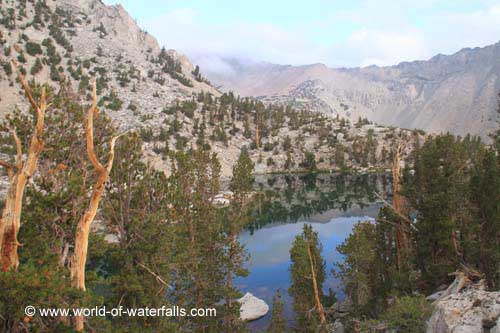 Then the weather turned, spectacularly. Of course it did. I had cursed the trip with lameness.

Now, storms are not uncommon in the High Sierra in August. John had once got caught in a spectacular thunderstorm in this country, where it looked and sounded like the mountain trolls were smiting each other with bolts and stones. This wasn’t one of them. By the time we got to the shelf that we would climb to get to Bench Lake, it was plain that this was a genuine, soaking rain storm that was going to hang around for a while.

We carried no tent — and a tent would have done us no good in this anyway. We were in for a good, long soaking.

John made a command decision. We upped-packs and hightailed it out of there. Yeah, I know, not a tale of ingenious overcoming of the elements to shelter from the storm in the wilderness. No, this is a tale of “damn, a bowl of chili somewhere dry sounds really good.” So we hiked, and hiked, back down to Onion Valley, with the rain sluicing down and slicking up the granite bones of the country. My legs felt like twanging banjo strings.

We were a bedraggled trio by the time we clambered into the Hippie Van and changed into reasonably dry clothes. We chugged on down to Independence and went to a café and ate the best bowl of chili in history of the universe. John bought a short dog of whiskey at a liquor store and we trundled back on up to Onion Valley.

That night we camped in the back of the Hippie Van, listening to Waylon Jennings. John taught me to play backgammon as the rain continued to beat a tattoo on the Hippie Van’s roof. I had just enough whiskey to feel warm and mellow. There must have been an awful fugue of dog-and-chili-farts, but nobody died.

The next morning, the world was scrubbed and beautiful and our gear was dry enough and we headed back up to Bench Lake to explore and lay on our backs and look at the sky. Tasha chased a bear in the middle of the night. It was good.

I’ve had many, many wonderful times in the mountains, but if I could roll back the years back when I was young and limber and do just one of those trips again, I think it would be that one — where nothing went the way it was supposed to, and everything was perfect.