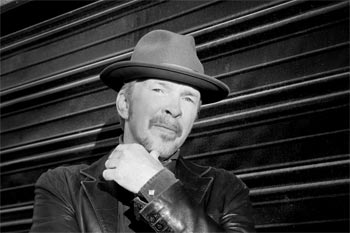 I already kinda thought so after spending several hours hanging out with Dave at the Sisters Folk Festival last September. Now the proof has been established beyond any doubt. Last night, Dave’s song “Beautiful City Across the River” played over the final scene of “Justified” as a fugitive escapes into Mexico. This afternoon I read this:

“Dave Alvin’s music speaks to our show, both melodically and lyrically.  We were fortunate enough to have him perform on the show last season, and it was a song that he felt spoke to our characters and the overall attitude of Justified,” said Greg Sill, music supervisor for the show.  “He was absolutely spot on.  It is a rarity to find an artist who speaks the visceral ‘language’ of a character as well as Dave’s music does with Raylan Givens.  Graham Yost (creator/executive producer), Michael Dinner (director/executive producer) and myself decided that Dave’s voice was that of a voice that would be playing in Raylan’s head. Especially when you consider the breadth of our story lines this season.  The poignancy is scary, because it’s so real and kind of haunting, but amazingly good.  We love you, Dave Alvin.“

Dave Alvin is the voice in Raylan Givens’ head. That is ridiculously cool. And since he’s the voice playing in my head most of the time — along with Tom Russell, Waylon Jennings and Steve Earle — maybe I’m as cool as Raylan Givens. I’ll have to ask my wife.

If you haven’t encountered Dave Alvin’s music, check it out. Songs like “Murietta’s Head,” “King of California” and his cover of the Grateful Dead’s “Loser” establish him as a bard of the Frontier Partisans — they’re like dark little Western movies in song. And all the rest of it, including the fact that he’s genuine, real and a straight shooter, make him the coolest guy in the universe.