“If you want to see some fun watch us kill these gringos.”

The American mining engineers were eager to get to work. The silver mines at Cucihuriacic, 100 miles southwest of Chihuahua City, had been closed down for the past couple of years. The tumult and turmoil of the Mexican Revolution had made it too dangerous to work there. But after a series of titanic battles in a brutal civil war last spring, the Mexican federal government under President Venustiano Carranza had pacified the country.

Well, perhaps not completely. It was true that General Francisco Villa was still at large, despite a series of crushing defeats, but the Villistas were surely no threat to the American mining experts from the Tuscon-based company ASARCO; General Alvaro Obregon had assured the Americans that the Carrancistas had cleared Villa’s raiders out of the countryside west of Chihuahua City. It was time to get the mines up and running again, get some silver pumping through the prostrate economy of Mexico, and return things to normalcy after five years of revolution and war.

There were many passengers on the train — Mexican nationals and an Englishman  as well as the American miners. The Americans played cards or read or dozed as the train chugged along. There had been an odd moment leaving the small depot at Santa Isabel, when two armed men had ridden up next to the train and peered inside before veering off and riding away. But no one gave that much thought as the train took on water and coal and got back underway. The cars rocked and clattered into the hills. It had been a long two day train journey to get this far. It would be good to get to Cuci and get the engine of industry humming.

About five miles out of Santa Isabel, in a deep cut bordering the Santa Isabel River, the train braked. A railroad car was lying diagonally across the track ahead. A preceding train must have wrecked. A few of the passengers went out on the back platform to see what was what. They soon found out — and it must have been a horrible realization.

Fifteen or more Villista fighters stood at the lip of the cut. They raised their Mauser rifles and opened fire on the train. One of the Americans, a man named Charles R. Watson, immediately jumped down from the train and sprinted away, hell bent for the river. The Villistas took a knee to steady their aim. The Mausers cracked. At about 100 yards, Watson stumbled and went down. He rose again, then threw up his arms and fell forward, rolling down the bank into the river.

The Villista fighters corralled the Americans who were outside the train, and others crowed into the passenger car, led by Col. Pablo Lopez. The 26-year-old was lean and handsome and fiery, with the kind of swagger only a young, heavily armed,  revolutionary killer can have. He had been a Villa loyalist from the very earliest days of the Revolution, and he shared his chief’s rage and hatred for the duplicitous gringos. The Villistas had always gone out of their way to protect Americans and American property in Mexico. They’d done a nice business across the border, trading expropriated cattle from captured haciendas for weapons. And how were they rewarded? The American President Woodrow Wilson recognized the hated rival faction led by Carranza and provided his army with material aid in battles on the border.

Villa saw that as the basest kind of double-cross — and any perceived treachery always drove him wild with anger. Lopez, too, was seething with rage. He ordered the American passengers to strip to their underwear and dismount from the passenger car.

“If you want to see some fun,” he said to the Mexican passengers, “watch us kill these gringos.”

He detailed two men to execute the Americans huddled on the right side of the rail car.

One of the Mexican passengers on the train, Jose Maria Sanchez recounted the killings:

“The two executioners used Mauser rifles. One would shoot his victim and then the other soldier would take the next in line… The suffering of the Americans seemed to drive the bandits into a frenzy. ‘VivaVilla!’ they cried, and “Death to the gringos!’ Colonel Lopez ordered the ‘mercy-shot’ given to those who were still alive, and the soldiers placed the ends of their rifles at their victims’ heads and fired, putting the wounded out of their misery. All bodies were completely stript [sic] of clothing and shoes.”

Eighteen men were gunned down. One American, Thomas Holmes, escaped the slaughter. He jumped down from the train at the beginning of the attack, twisted his ankle and fell into the brush. When the firing opened up, he crawled into denser brush and the Villista killers overlooked him, leaving him alive to tell the tale.

That tale, reported in a flash across the nation in all its grisly detail, sparked rage in the United States. Americans clamored for President Wilson to send troops into Mexico, but the professorial president resisted. Wilson was focused on domestic reform and he was no warrior. And he didn’t want to get embroiled in a Mexican campaign when war was raging in Europe.

There was a serious ethnic backlash in American border towns. U.S. troops had to secure the border bridges  to keep American vigilantes from pouring into Juarez to exact revenge. Mexican-Americans were beaten up and sometimes lynched. Immigrants were refused entry.

Pablo Lopez would go down in a hail of Mauser bullets himself in less than a year. He accompanied his jefe, Pancho Villa, on a raid into the U.S. at Columbus, New Mexico, on March 9, 1916. The raid was a disaster. Lopez was shot through both legs. With an attack on U.S. soil, Wilson’s hand was forced. He sent a Punitive Expedition into Mexico led by General John J. Pershing, with orders to kill or capture Villa and his henchmen.

The sorely wounded Lopez hid out in a cave, until the severity of his wounds and near-starvation got the better of him. He later insisted he would have died resisting rather than give himself up to the Americans, but he was willing to surrender to Carranza’s federales when they surrounded his hideout. The federales treated his wounds so that he would be able to stand before a firing squad. Lopez would not talk to any American, but shortly before going to the wall, Lopez gave an interview to an Irish reporter (he considered the Irish fellow revolutionaries). His hatred for the gringos was undying, but he did express some remorse for the slaughter of unarmed non-combatants at Santa Isabel.

“Things might not have gone as they did if it had not been that there were other jefes there among whom there was a spirit of deviltry,” he told the Irishman. “Perhaps we would have been content with only the Americans’ clothes and money. But señor, they started to run, and then our soldiers began to shoot. The smell of powder makes our blood hotter. The excitement grew and — ah, well señor, it was all over before I realized. Yes, I was sorry when I had time to cool down and reflect.”

At 11 a.m. on June 5, 1916, Col. Lopez limped out into a plaza at Chihuahua City, with the aid of a crutch. He stood against the bulletpocked execution wall, staring evenly into a the camera of a photographer there to record the public event. He smoked a cigar, then dropped the crutch and faced the five-man firing squad. The gringo-hating revolutionary spotted a man among the large crowd of spectators who appeared to be an American. He insisted that the man be removed.

“I don’t want to die in front of that guy!” he complained.

The American was escorted away.

Lopez refused a blindfold and removed his straw sombrero.

Five Mausers roared, red blossomed on Lopez’s white shirt and he crumpled, dead before he hit the ground.

Justice had come to the perpetrator of the Santa Isabel Massacre. 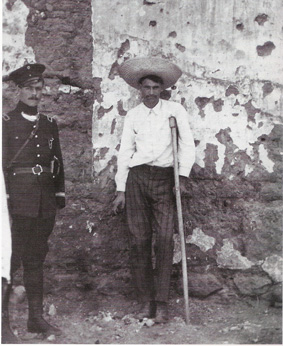 Col. Pablo Lopez, about to meet the firing squad in front of a bullet-pocked wall in Chihuahua City. Vicious killer though he was, he died game.