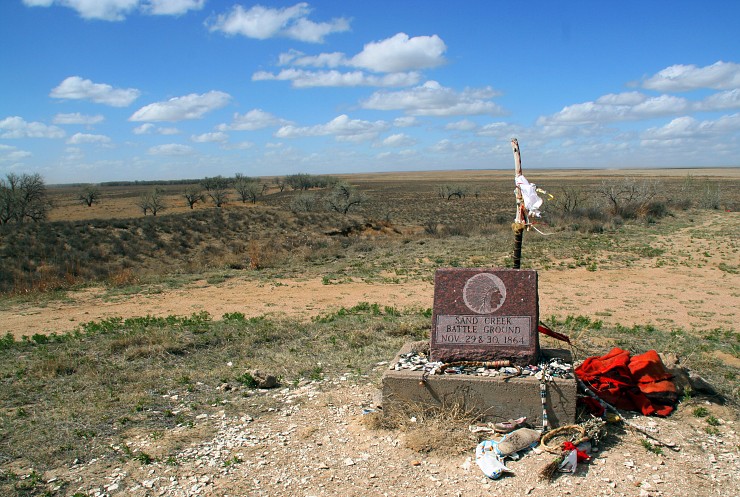 Sand Creek — site of one of the most notorious episodes in frontier history.

November 29 is the anniversary of one of the sorriest episodes in American history, an atrocity that stains the soul of the nation to this day.

On November 29, 1864, a militia unit known as the Colorado Volunteers struck the Cheyenne village of Black Kettle. Cheyenne warriors had been raiding across Colorado, but Black Kettle’s village was peaceful — and supposedly under the protection of the U.S. Government.

Enter Col.John Chivington. A fire-and-brimstone religious zealot, the flamboyant Methodist preacher was known to drape himself in mountain lion skins and wear a pair of Colt revolvers strapped around his waist, fit weapons for a 19th Century Warrior for God. His rank was with territorial volunteers, and he carried a good record, having been instrumental in whipping a Confederate force in the Battle of Glorieta Pass in New Mexico. That victory kept the Rebs out of the Colorado goldfields and made Chivington a hero.

Raging with ambition, Chivington wanted another victory —Rebs or Redskins, didn’t matter — to secure him a general’s star and the inside track on a congressional or Senate seat when Colorado became a state. He led the Colorado Volunteers out to punish the Cheyenne, who were encamped with Chief Black Kettle under the supposed protection of the U.S. Army in the elbow of a small watercourse called Sand Creek. The half-Cheyenne plainsman George Bent and his younger brother Charley were at Sand Creek.

A dreadful doom was riding down upon Black Kettle’s people.

The Colorado Volunteers hit the Cheyenne camp at Sand Creek as the first fingers of a cold dawn pulled apart the veil of night. They had been up late the night before, drinking and celebrating in anticipation of a victory over the “hostiles.”

But there were few, if any, committed militants in Black Kettle’s village. The Dog Soldiers who had been raising hell in the Smoky Hill country of Kansas were not there. Most of the men who camped with Black Kettle were absent hunting buffalo. That mattered not at all to the Col. John Chivington. For him, the Cheyenne were enemies of the state and he was an instrument of God ordained to scourge them from the Earth.

The attack was disorderly. To start with, only a portion of Chivington’s command obeyed the order to attack. Captain Silas Soule and Lt. Joseph Kramer, who each commanded a company of the First Colorado Cavalry, refused to attack. The troops who did, the Third Colorado Volunteers, carried out the assault with gusto. Indiscriminant gusto. They shot down women and children and stopped to mutilate the bodies.

George Bent, wounded in the hip, escaped into the sand hill bluffs above the camp, where the Cheyenne put up a fight and kept the soldiers at bay. The warriors managed to kill 24 soldiers and wound 52 more (some of the dead and wounded may have been victims of friendly fire). Bent later tallied the Cheyenne dead at an estimated 53 men and 110 women and children.

Calling the Sand Creek attack an atrocity is no revisionist rant pandering to delicate modern-day sensibilities. Men who were there named it for what it was.

Captain Soule denounced the Third Colorado Volunteers, who carried out most of the atrocities as “a perfect mob.” He decried behavior beneath the dignity of any savage:

“White Antelope, War Bonnet and a number of others had Ears and Privates cut off. Squaws snatches were cut out for trophies. You would think it impossible for white men to butcher and mutilate human beings as they did.”