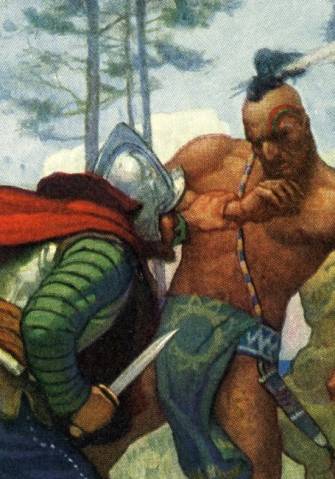 The Robert E. Howard Forum is worthy territory for any Frontier Partisan to explore. Howard was a Texas-born-and-bred writer of pulp fiction in the 1920s and ’30s, best known for his character Conan of Cimmeria. In addition to “weird” stories that essentially created the genre of Sword & Sorcery, Howard wrote adventure, Westerns, and many, many boxing stories.

The uninitiated might not expect that a forum devoted largely to Conan would be a font of interesting information and discussion on a wide range of topics. Sure, there are provocative images of mostly-nekkid “Barbarian Women” (nuthin’ wrong with that, is there?), but there are also discussions of Viking and Celtic history and archaeology. Most to the point here, there are threads devoted to Native American history and archaeology — including a thread devoted to this here blog!

That’s all fitting — Conan was a map-maker and a bit of a student of comparative religion and philosophy himself, and Robert E. Howard was, above all, a serious student of history.

What follows is abstracted from a forum conversation with moderator and friend Deuce Richardson. Deuce weighs in on King Philip’s War of 1676 — the per capita bloodiest conflict in American history.

Many of us celebrated Thanksgiving yesterday. In 1621, Massasoit, sachem of the Wampanoags, sat down with the Pilgrims for their harvest feast. Fifty-four years later, this is what his son had to say in Plymouth:

“The English who came first to this country were but a handful of people, forlorn, poor and distressed. My father was then sachem. He relieved their distresses in the most kind and hospitable manner. He gave them land to plant and build upon.…They flourished and increased.…By various means they got possessed of a great part of his territory. But he still remained their friend till he died. My elder brother became sachem. They pretended to suspect him of evil designs against them. He was seized and confined and thereby thrown into illness and died. Soon after I became sachem, they disarmed all my people.…Their lands were taken.…But a small part of the dominion of my ancestors remains. I am determined not to live until I have no country.”

The next time Metacomet came to Plymouth, he was in pieces, having been drawn and quartered as a “traitor” to his supposed overlords. His head remained on a spike for decades. His wife and son had been sold into slavery and shipped to the West Indies months before he himself died, still fighting. Such was the justice of the “saintes” of Plymouth. 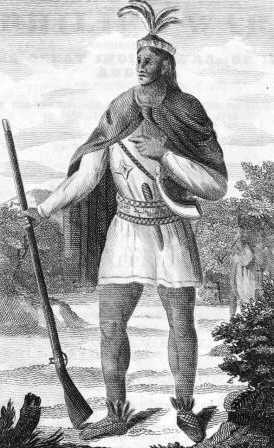 Metacomet, known to the English as King Philip.

Right now would seem to be an appropriate time to look at Russell Bourne’s The Red King’s Rebellion:

It examines all the factors leading up to and through “King Philip’s War” (1675-1678). Bourne is a direct descendant of a colonist who lived through the war. He traveled all over New England researching local accounts, both from the colonists and the Indians. He also examines the various schools of thought that have prevailed about that conflict over the centuries.

I found Bourne very even-handed. He doesn’t paint either the Algonquins or the settlers as good or evil. He blames the war on a breakdown in politics on both sides. However, if there are “bad guys” in the situation, it would be the Pilgrims at Plymouth Plantation. Unlike the other Puritan or Baptist colonies (Massachusetts Bay, Rhode Island, Connecticut), the Pilgrims were pretty consistently belligerent during that period. They basically stopped trying to get along.

Whenever there was any sort of crisis, the Pilgrims always doubled down. In the process, they often dragged the other colonies in with them. They high-handedly arrested Philip’s brother, Alexander, who mysteriously died in Plymouth right after being released. Philip/Metacomet was the son of Massasoit, the Wampanoag sachem who befriended the Pilgrims and helped them survive the first several years.

Some of the accounts from the time are jaw-dropping. The Pilgrims were incredibly superstitious. At one point, an Injun was hanged partly on the “evidence” of a corpse bleeding in his presence. At the end of the war, with 9,000 men, women and children dead, the Pilgrims happily sold hundreds of Algonquins of various tribes (including converted Christians) into slavery to be sent to the West Indies, which was a deferred death sentence (no money from a corpse!).

The upshot of the war was that it showed the colonies couldn’t handle their own affairs peaceably. Hitherto fairly independent, the colonies were brought firmly under the British Crown and consolidated into the Dominion of New England.

We’re in the midst of the 340th anniversary of that devastating conflict right now.

Robert E. Howard scholar Steve Tompkins was absolutely right that the Pilgrims lived in a “sword-and-sorcery world”, both physically and spiritually. There are numerous mentions of swords and other non-gunpowder weapons in the hands of the colonists. The redoubtable Benjamin Church had a favorite cutlass. There are numerous references in the annals of the time to “fire and sword”.

There were also several mass hallucinations of an apocalyptic character which wouldn’t have been out of place in 675AD as opposed to 1675AD. Comets were seen that are wholly unknown to modern astronomy. Ghostly cavalcades were heard just out of sight. A saintly figure materialized amidst the English forces at Hadley and promptly disappeared at the moment of victory.

The fur trade decline put both the Pilgrims and Algonquins under stress, as Bourne points out. The pious “freemen” of Plymouth Plantation were also feeling the pinch demographically, as their more tolerant Puritan neighbors in Boston and elsewhere had attracted more colonists.

The Pilgrim response, as usual, was to double down. They sought to become even more “righteous” to counteract the tribulations sent from on high. They also got more high-handed and less tolerant of the very natives who engineered their initial survival. One thing they did was to demand, at various times, that certain Injun settlements hand over all firearms. An insidious policy, since to do so meant starvation and to refuse was to be accused of imminent hostilities.

There were also the asymmetric legal responses. Native workers within the Plantation could not take a walk on a Sunday without being fined (or worse). Three Wampanoags were accused of murdering one Christian Injun. They were convicted on negligible evidence and hanged in Plymouth. Matoonas was a Christianized Nipmuc sachem who lived north-west of Plymouth. His son was wrongly convicted of a murder (such was the opinion even of many settlers) and his head put on a spike. Matoonas never forgave it and he wreaked bloody vengeance in years to come.

Such actions are emblematic of the events that brought on King Philip’s War.

One example of Bourne’s even-handedness is his balanced treatment of Benjamin Church. Church was basically the savior of Plymouth and the other New England colonies, despite not being particularly fond of the “saintes” (sic) back in Plymouth. He also had Native American friends and brought more Injuns back to the colonists’ side than all other commanders combined.

Here’s a link on Church: http://erroluys.com/…prayingtown.htm

Not only was he “America’s First Ranger”, he was also one of the first authors of Colonial America. 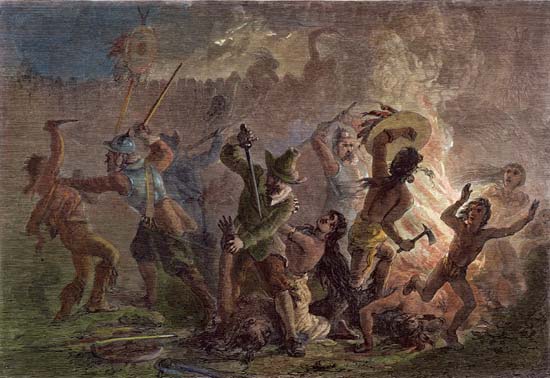 The early warfare between the Puritan settlers and the Indians of New England was extraordinarily savage.

One is that the Injuns were (or were reported to be) as tall or taller than the colonists. You see this replicated clear on to the Plains Wars period. Philip/Metacomet was considered a tall, handsome man (much like Tecumseh 130 years later). 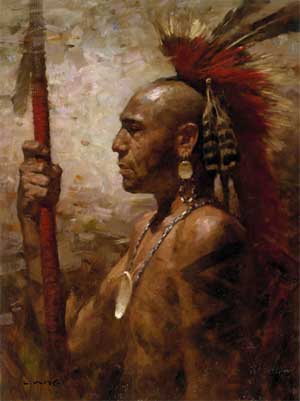 A Pequot warrior. The Algonquin peoples of the east coast were tall, robust and handsome people.

Another item would be the technological advances by the Algonquins in just 50 years. The tribes went from an advanced Neolithic level to having their own forges and livestock in a very short span of time. They built quite respectable stone fortifications (by the colonists’ own admission) in the Narragansett last redoubt on Rhode Island. Many roads in New England follow the routes laid down by the natives. However, the Algonquins were not allowed to advance further.

You see the same thing with the Five Civilized Tribes in the American South. It really doesn’t fit the narrative of “they were savages and didn’t want or try to deal with the new situation.” Despite their best efforts, they simply weren’t given any time.