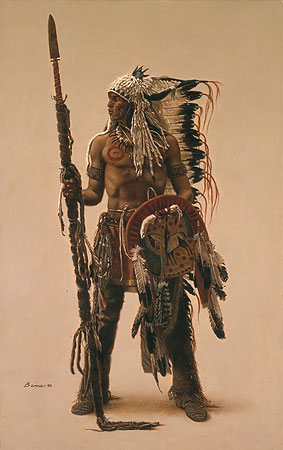 A Sioux warrior by James Bama. Yes, they were MEN.

The website “The Art of Manliness” is running an outstanding series on the principles of manhood as understood and practiced by the Lakota people of the 19th Century. It is based upon the work of Charles Alexander Eastman, who was raised among the Sioux before turning to walk The White Man’s Road, becoming a highly-educated man and a government official. He is widely regarded as the first American to really depict native history from a native point of view.

The series has four parts:

The Sioux Guide to Situational Awareness

The Sioux Guide to Mental and Physical Toughness

The Sioux Guide to Spirituality

It is one of the guiding principles of Frontier Partisans that the example of the men of the frontier past is relevant today, and this series affirms that.