Come gather ’round me buckaroos and a story I will tell

Of the fugitive Claude Dallas, who just broke out of jail

Claude Dallas was born out of season. Like many of us, he felt a powerful pull toward a way of life that was mostly passed — and he sought out its remnants with a single-minded fervor. His determination to live as he pleased led to a showdown in a lonely trapping camp in one of the wildest places in the continental United States and a moment of destiny that played out in gunsmoke and a long run on the outlaw trail.

Dallas came west from Ohio in the 1970s to become a buckaroo. He worked in Oregon on the legendary Alvord Ranch and for other outfits in the remote reaches of the Oregon/Idaho/Nevada outback. By all accounts he was a quiet, unassuming young man with an extraordinary work ethic and a passion for things Western — including firearms. He was photographed in a National Geographic piece on the region’s buckaroos, and he looked happily out-of-time in his buckaroo hat and denim jacket. One of those pictures would end up on the cover of Jeff Long’s book “Outlaw: The True Story of Claude Dallas.” 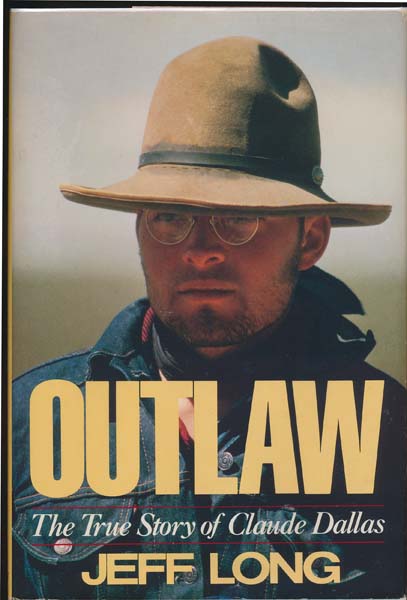 Eventually he drifted into trapping, reaching even further back into the history of the West to touch the lifeways of the mountain man. He’s sometimes depicted as a loner, but he had plenty of solid friends who admired his capacity for hard work and his commitment to his way of life.

Dallas had a real attitude about government — the kind of attitude that would fit right in at the most extreme end of today’s “Tea Party” movement. The Feds had tracked him down in 1973 and busted him for draft dodging. They knocked the heels off his boots and marched him through airports in cuffs to take him back east — where charges were dropped because he’d never got his draft notice. He immediately went back to his Idaho/Oregon/Nevada stomping grounds.

That attitude led Dallas to disregard game laws. He seems to have figured he was living in a manner that exempted him from such pesky doings. Like the song says, “A man’s got a right to hang some meat when he’s livin’ this far from town.”

In the winter of 1980, Dallas camped just a few miles north of the Idaho/Nevada line in the Owyhee country, at a place called Bull Camp along the South Fork of the Owyhee River. In January 1981, two Idaho game wardens, Bill Pogue and Conley Elms came into the camp to check out his activities. Dallas had hung two deer carcasses, and he was in possession of bobcat pelts that were out of season in Idaho, though in-season in Nevada. Dallas’ friend Jim Stevens had driven supplies out to the remote campsite, and he turned away nervously from what was degenerating into a confrontation.

Dallas and Pogue were ill-met. The veteran game warden had a reputation as a hardass. Maybe sometimes too much of a hardass. Dallas had a problem with The Man. And he packed a .357 revolver on his hip, under his coat. Somehow, Pogue and Elms had missed that.

It may be that Pogue rode Dallas hard. Dallas claimed to be in fear for his life, but I think that’s bullshit. Stevens said he never heard either warden threaten Dallas in any way. Pogue may have been one of those cops you can’t reason with, but he wasn’t going to shoot a man over a game violation. He was going to take Dallas to jail, which was probably more than was reasonable under the circumstances. And Dallas wasn’t gonna go. Maybe that’s where the sense of threat came in. Dallas knew he wasn’t going to come in and that meant the cops were going to have to take him in. In his mind, I guess, that meant feet first.

Conley Elms went inside Dallas’ tent to secure the bobcat pelts. Pogue and Dallas faced off.

There are no eye-witnesses to what went down. Stevens was turned away, looking out over the river. Dallas claimed that Pogue went for his gun. Maybe he did put his hand on the butt — it’s something a cop would do under the circumstances. Dallas pulled his .357 Ruger Security Six and shot him in the chest. Conley Elms, a gentle giant of a man, came out of the tent and Dallas shot him, too. Both wardens went down, dead or dying.

Then Dallas went into his tent, retrieved his .22 lever action rifle and delivered a kill shot to the head of each lawman.

“Nobody has the right to come into my camp and violate my rights,” Dallas told Stevens. “In my mind, it’s justifiable homicide.”

Dallas left big Conley Elms in the river near his camp. A thoroughly freaked out Jim Stevens helped him get Pogue’s body on a mule and up to the rim above camp where his vehicle was parked. They hid the corpse in a coyote den and Dallas went on the run.

There was a massive 15-month manhunt for the fugitive mountain man. The law caught him in a trailer near Paradise, Nevada, where he had friends. Dallas was slightly wounded in attempting to escape and was apprehended. He was charged with murder but the jury opted for manslaughter. They sorta bought the idea that Dallas was defending himself against an overly-aggressive Pogue. I think that if he hadn’t administered those cold-blooded kill shots that he’d have been acquitted.

That mightily pissed off the law enforcement community — and does to this day. My friend, the late Chief Dave Haynes of the now-defunct Sisters PD, would turn bright red at the mention of Dallas’s name. And Dave hated that Ian Tyson song.

In 1986, Dallas escaped from prison in Idaho, probably abetted by ranching friends. He went on the lam again for almost a year. For a time he was in the company of a woman who had been a Republican Party activist. The Feds almost caught him in Santa Cruz, California, while I was there. I well remember the swarm of law enforcement all over town. 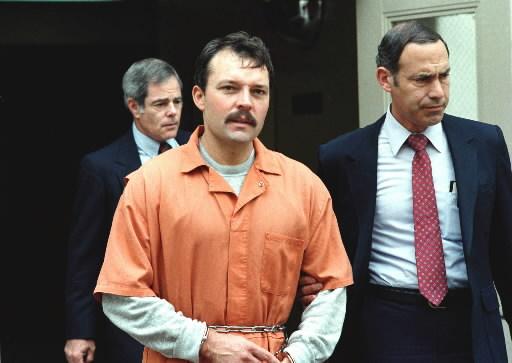 Dallas after his second capture in Riverside, CA.

The trail ran out in Riverside. They caught him leaving a 7-11. Back to prison, this time in a higher security facility in Kansas. He served 22 years of a 30-year sentence. He’s out now. A friend who hunts the area tells me he was working in the Steens Mountain country for a time, but he’s since moved on, apparently to Utah. He’s kept a very, very low profile.

Back in the ’80s, when all this was going on, I read everything I could get my hands on about Dallas. I was fascinated with the story, because I could so strongly relate to the nostalgia for a time we never saw. Hell, Dallas fed himself on the same books about the West and about the early hunters in Africa that I did. And I respect the cowboy work ethic and the desire for self-reliance. I found a lot to admire in Claude Dallas back then.

But you can’t get past the fact that Claude Dallas was a cop killer. His life was not in danger at Bull Camp, though he may have convinced himself it was. Bill Pogue was a pushy kind of man, and Claude Dallas was a man you don’t push. It ended in gunplay. That’s it.

There’s no justification in it, only tragedy. Two lives snuffed out — and for two decades Dallas lost the freedom he so craved. Like most outlaw tales, it’s ultimately kinda sad and sordid. But it makes for a hell of a song…