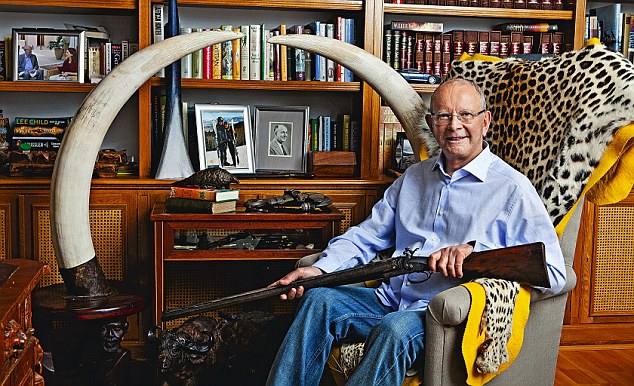 There’s a new Wilbur Smith book out October 20 — another entry in the saga of the Courtney family, which takes the adventurers from the early exploration of southern Africa in the 17th Century up through the tumult of the 20th Century.

This entry, titled “Golden Lion,” fills the period after “Birds of Prey,” in the 17th Century.

He saw his father executed in battle. He spent his youth avenging that death. And now Henry ‘Hal’ Courtney is a man with a ship – and a family – of his own.

But fate has not finished with Hal. On a voyage along the eastern shore of Africa, a powerful enemy abducts his wife, the fearless warrior Judith… and with her, Hal’s unborn child. For Hal, a man all too familiar with loss, there is only one way forward: He must track his nemesis across desert and ocean, through the slave markets of Zanzibar and the dangerous waters of the coast, in pursuit of the woman he loves, the child he sired, and the glorious destiny that awaits him. 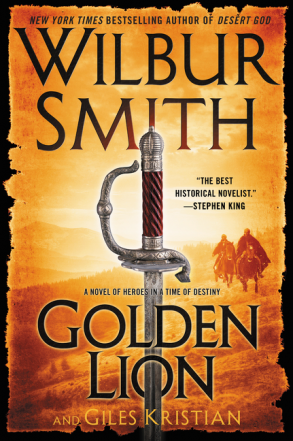 Wilbur Smith is billed as an adventure writer, which he is. But really, he’s a writer of Romance. I say that not in a pejorative sense, but in the old-fashioned sense. He writes tales of intrepid men testing themselves against Africa and in conflict with their often-savage fellow man. There’s a great sweep of history to these tales. Smith’s heroes are classic alpha males — virile, handsome, skilled at arms and successful in business. They are not saints, but their negative qualities — avarice, unscrupulous business practices, lust, occasionally bastardly behavior — are often written in a manner that turns them into a kind of virtue. As in, you know you want to be bad like that…

These heroes are not constructs for Smith — they obviously embody his values. A lengthy story in the London Telegraph gives a pretty good glimpse of his character, which is very much in line with his Courtney men, from the drive for financial success to the high libido.

Smith’s women are either tempestuous, strong-willed beauties (to be tamed only by a Wilbur Smith alpha male, of course…) or corrupt. His attitudes toward race are paternalistic. The British-descended alpha male hero usually has a black warrior sidekick who is wise, loyal — and totally secondary. Basically… Tonto. Smith’s Africa is the white man’s Africa, the Africa of the hunter, trader, pioneer, empire builder. The Africa of Selous and Burnham and P.J. Pretorius (whose exploits he hijacked for “Shout At The Devil”). That Africa is gone, but it was real in its day and Smith is an able and certainly entertaining chronicler of its heroic, mythic tales.

Smith misses no opportunity to slam radicals of any stripe, who are generally portrayed as morally depraved and something less than manly, and he is an unabashed admirer of the kind of buccaneering Anglo-American capitalism that drove the great colonial explosion of the 18th, 19th and early 20th Centuries.

Cripes, all that must give the average lefty the vapors! Surely to Wilbur’s delight. Well, like I said, the books are fundamentally old-fashioned (despite a liberal sprinkling of racy bits). And that old-fashioned outlook works best up to about World War I. Smith has a real feel for a man’s man sort of Victorian/Edwardian mindset. His tone fails him in his more contemporary stories. The most recent of these, the “Hector Cross” thrillers, are just dreck. Terrible.

Smith is, or was until the last few books, quite a solid writer — his quality is well above the average pot-boiler. His writing is at its best in describing hunting and trekking in the wilds of Africa. He’s writing what he knows and loves: he was raised in Northern Rhodesia and for decades he spent a year writing followed by a year big game hunting and fishing. For my money, his best books are the early Courtney novels and the Ballantyne novels, those dealing with the Zulu War, the Boer War, the conquest of Rhodesia. That’s the era Smith seems to have the best feel for, the one he evokes most vividly, which gives those books a certain depth and heft. The buccaneering maritime novels of the early Courtney explorers are fun, pacy reads.

Notice that “Golden Lion” lists a co-author: Giles Kristian. This has become common practice for mega-bestselling genre authors. Tom Clancy started the trend, and Clive Cussler’s recent books all are written by somebody else. That may seem like a bit of a cheat, but in this case, I think it’s a good move. Smith is well into his 80s, and the old lion has clearly lost a step. Kristian is the author of some highly regarded historical fiction set during the English Civil War and a series of Viking novels. I haven’t read him, but what I’ve read of him bodes well for an improvement over the recent run of Smith’s novels.

Wilbur Smith is one of the bestselling authors of all time — we’re talking 125 million books sold. Yeah, so he ain’t no Cormac McCarthy; he ain’t no James Carlos Blake (in a just world, JCB would hit the bestsellers list as often as Smith does). But when a ripping adventure yarn in Old Africa is what’s called for, he’s your chap.

Previous Post: « The Return Of A Boer War Documentary
Next Post: ‘Listening To Talkers Makes Me Thirsty… And Hungry’ »