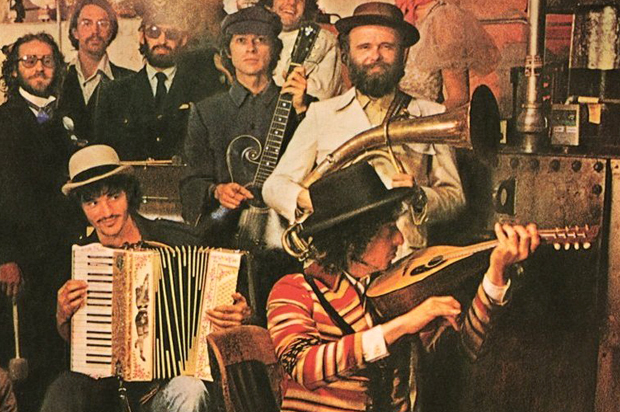 Greil Marcus coined the term “The Old, Weird America” to describe what Bob Dylan and The Band evoked in “The Basement Tapes.” The legacy of Harry Smith’s “Anthology of American Folk Music” lives on.

Hawlin Alley on a dark and drizzly night
Billy Lyons and Stack-A-Lee had one terrible fight
All about that John B. Stetson Hat.

Long ago, I pledged my allegiance to “The Old, Weird America.” My beloved Frontier Partisan stories are a part of its heritage. So is the music I love.

The phrase “The Old, Weird America,” comes from the rock critic Greil Marcus, who used it to describe the treasures to be found in the Anthology of American Folk Music edited by Harry Smith. Smith gathered recordings made in the 1920s and 1930s and put them together for release in 1952. These country, blues and folk songs evoked a different and, well, weirder, America than the one that was evolving in the post-World War II era. And for some wayward young people who were not so sure the American Dream they were being sold was one they wanted to buy, the Anthology was both a bracing shot of raw white lightning and a rich vein of ore to plunder.

The America of the Anthology is a world of snake-handlin’ men and violent misfits; suicides and spike-drivin’ heroes. Bluesmen and bandits. Adulterers and the women who shoot them. Men who walk through life with a red right hand. Stuff you find in Cormac McCarthy or Joe R. Lansdale novels. Though the recordings were made in the early 20th Century, many of the songs have roots that trace back across years and continents. Yes, Robert E. Howard, you who knew The Old, Weird America in your bones — “how long the old ballads lingered.”

It is impossible to overestimate the impact the Anthology had on American music. It launched the Folk Revival of the late 1950s-early 1960s and its echoes continue today. Right here in my home town we have a 20-year-old folk festival that exists because Harry Smith put together all these old recordings and gave them to the world.

The Anthology wasn’t the only relic of The Old Weird America that left an indelible mark on the musical landscape. There was also “Robert Johnson: King of the Delta Blues Singers.” That record album sailed across the Atlantic and lit a fire under Eric Clapton and Keith Richards and who knows how many other kids with guitars, and it caused an explosion.

I went to the crossroad

Fell down on my knees

I went to the crossroad

Fell down on my knees

Asked the Lord above “Have mercy, now

Save poor Bob, if you please

A soul sold to the devil, a fast life ended by poisoned whiskey at the hands of a jealous husband (or a jealous lover) leaving poor Bob on his hands and knees barking like a dog — you don’t get more wild and weird than that. That hellhound-driven guitar and that haunted, keening wail… that’s rock-n-roll.

Marcus was talking about Bob Dylan’s Basement Tapes when he coined the phrase. He described Dylan’s work fooling around with The Band as a kind of dialogue bounced off the characters and creatures of the Anthology — “palavers with a community of ghosts.” And, he insisted, “these ghosts were not abstractions. As native sons and daughters they were a community.”

“Palavers with a community of ghosts…”

I cannot express how much I love that. It describes exactly what I’m doing here. My ghosts are native sons and daughters, too. And — I assure you — they ain’t abstractions. I spend my days in a palaver with that community and spill it out right here.

Consumerism, political correctness, media pandering to soccer mom sensibilities, the atrocious flattening of pop music … all have done their best to turn The Old, Weird America into the Land of the Bland. But The Old, Weird America is strong. It’s still lurking there, down at a crossroads somewhere off the interstate and away from the shopping malls, ready to tap you on the shoulder and lure you in to its mysterious, dangerous and exhilarating embrace.