As promised, a treatise on the Frontier Partisan Biathlon.

The basic concept is to crank up the heart rate with kettlebell complexes (groups of movements) then settle it down to shoot accurately at 4-inch clay targets at a variety of ranges (roughly 50 meters; 75 meters, 100 meters — I refer to meters because that’s the way the tangent sight on the CZ 452 FS is set up. And it sounds cool and sophisticated).

Increase the intensity by compressing the time between sets and flowing between exercises — say 10 snatch-press into 20 bent rows, followed by a 5 shot string. I’m not very systematic about this. I don’t time workouts and I don’t record shooting scores. I know when I’ve worked hard and when I’ve shot well and when I haven’t. As with my martial arts, the practice is its own purpose — I’m not training for something else.

I use a 24kg (53 #) and a 20 kg (44 #) kettlebell — try to mostly use the 24 kg for single-bell work, but when you get tired enough for your technique to break down, it’s good to step down to a lighter KB. The snatch press is my foundational exercise. Swing the kettlebell from its position between the legs, straight up overhead to a locked position; lower to the shoulder. You can either do a strict press, with no help from the legs or squat slightly and thrust up. I do the latter. Here’s what it looks like (all photos by Ceili Cornelius). 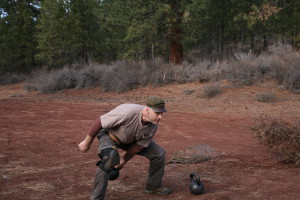 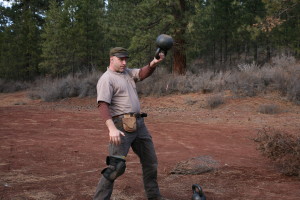 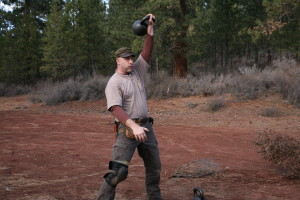 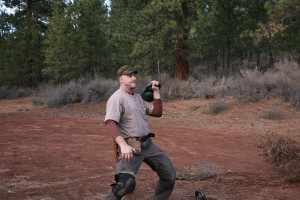 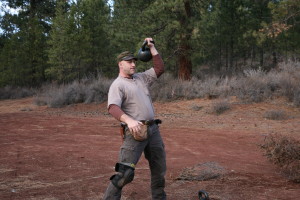 Switch hands by slinging the KB through the legs in a figure 8.

Then fire a five string shot offhand, kneeling or over the truck, depending on the range (shortest to longest). I don’t do much prone shooting because, well, I just don’t. That’s cinder there. Ever had a bunch of volcanic cinder down your pants? There ya go. Anyway, depending on my goals for the day and my ammo supply, I’ll either run a five shot string between each exercise or do a series of sets, then a five-shot string. Let me tell ya, it’s a great feeling to bust a straight five set of those little orange bastards when your heart’s thumping like a jackhammer and you’re sore and tired. Settling the breathing is key, and it’s a good practice for all kinds of stress situations.

I also do a lot of double-KB bent rows, which are self explanatory, and swivel presses. For the swivel press, hold the KB like a basketball and swivel and press it out left, center, right, just like you were passing a basketball (without letting go, of course).

The beastie is the double KB thruster, which gasses me out and degrades my shooting faster than anything. Clean the KBs to the shoulder, squat, thrust up to lockout. Like so: 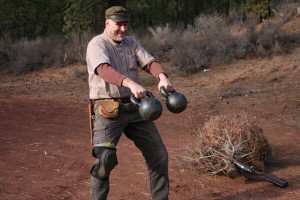 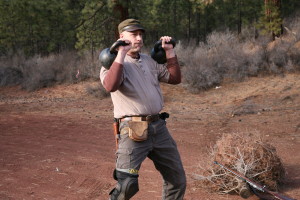 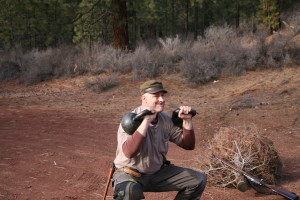 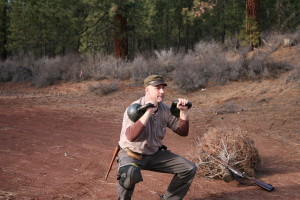 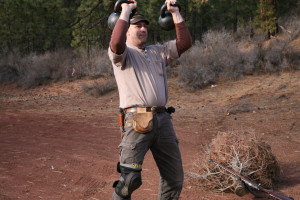 The load is asymmetrical, since I’m using two different sizes of KB — part  of the fun.

The other exercise that puts pressure on the offhand shooting in particular is the farmer’s carry. Fifty yards down, 50 yards back, carrying the bells. Sometimes I add difficulty by running (OK, actually lumbering) downrange or by climbing up and down the fairly steep to the rock pit above the one where I usually shoot. 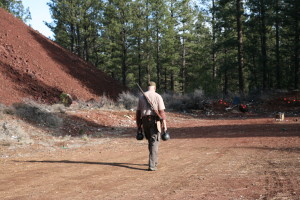 The farmer’s carry blows up your forearms, so offhand shooting gets tougher. 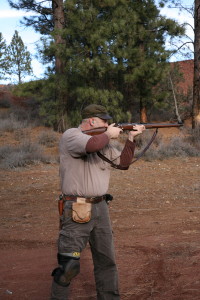 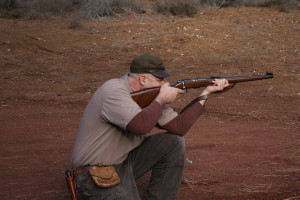 The kneeling is steadier, of course. Thanks to my bro, I have a Kevlar Mechanixwear knee pad, so my wife is no longer pissed at me for having a hole in the right knee of every pair of pants I own. Those cinders…

Shooting off the backpack over the truck is obviously the steadiest position, but you can also feel your heart pound against the quarter-panel. 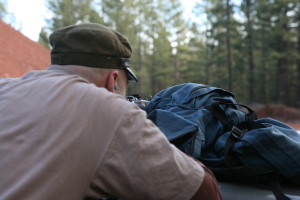 Pace determines intensity. Running through that routine or something similar three times with minimal pause is an ass-kicker. I only do that about once a week. Sometimes I do the same kind of routine but allow much longer rest (minutes rather than seconds). Other times I’ll do a high volume of one or two exercises (say 100 snatch-press in 10 sets) over a longer period of time. Sometimes I’ll tack the biathlon on the back of a hike. Like I said, I’m not systematic about it. I just go with what the mood of the day dictates. Sometimes I feel ferocious and other times I feel like a 49-year-old guy with a sore shoulder.

The important thing is that I’m out there three, four times a week breaking a sweat. Between this, karate and tennis, I stay in pretty good shape and have fun doing it. And I know that the KB work has made me more resilient and less prone to injury in my other activities.

The one thing I need to do more of is flexibility and mobility work. Several folks have recommended yoga, and I know they’re right, but can I bring my rifle, revolver and bowie knife? Yeah, didn’t think so…