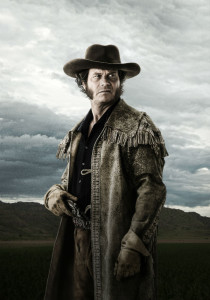 Bill Paxton as Gen. Sam Houston. A towering and complex figure in Frontier Partisan history. Paxton should be good in the role.

History Channel is rolling out an eight-hour miniseries on the Texas Revolution and the beginnings of the Rangers on Memorial Day weekend. After the excellent “Hatfields & McCoys,” and the well-done “Bonnie & Clyde,” I’d like to be excited, but recent efforts by History Channel leave me deeply skeptical.

The promos for the upcoming “Sons of Liberty” don’t inspire confidence, either. I’m all for creating a sense of contemporary relevance to draw in the historically-challenged masses, but titling Paul Revere “The Thug” (huh? Maybe “The Propagandist”) and making pudgy, late-middle-aged (50 at the Boston Tea Party in 1773) political agitator Samuel Adams into a smoulder-eyed action hero (hipster facial hair again!) is risible. My daughter really wants to watch — and I’m not sure I can bear it. I’m hoping she forgets about it. 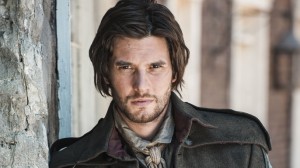 This is Samuel Adams in History Channel’s “Sons of Liberty.” Seriously.

Back to “Texas Rising.”

On the plus side, an executive producer from “Hatfields & McCoys” is on the job on “Texas Rising” and seems to “get it.”

“We all know the Alamo,” said executive producer Leslie Greif (Hatfields & McCoys) at the Television Critics Association semi-annual press tour on Friday. “But no one knows what happens afterwards. The Alamo was not the end of the story, it was only the beginning.”

And there seems to be a genuine effort at grappling with the complexities of Mexican history, which includes making General Santa Anna something other than a cartoon villain. 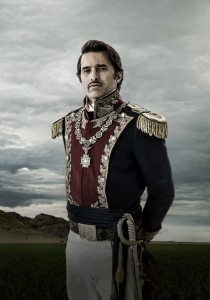 Gen. Santa Anna is usually portrayed almost as a cartoon villain. Yet he was the most significant figure in mid-19th Century Mexican history.Supposedly Texas Rising will handle this with more… nuance.

A prime example of the new depth the drama hopes to bring to the historical account is the character of Santa Ana (sic).

“He’s a rich, complicated and interesting character that’s very much a product of his culture,” said director Roland Joffé (The Killing Fields, The Mission). “By creating fully dimensional characters, you begin to understand (the culture) in which people lived — and what this story does for Santa Anna is not cliché at all. It puts him in line with some very powerful historical men.”

Roland Joffé’s role is encouraging , too.

And I love the look of the Durango, Mexico, locations. Landscape that makes my heart ache. I can’t explain that, exactly, but I bet you know what I mean.

Anyway — trailer here. And, like I said, we’ll see.