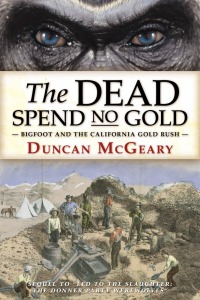 The following is a guest post by Duncan McGeary. Duncan is the owner of Pegasus Books in Bend, Oregon, and the author of several books, including two historical horror novels set on the mid-19th Century California frontier — “Led to the Slaughter: The Donner Party Werewolves,” and the newly-released “The Dead Spend No Gold: Bigfoot and the California Gold Rush.” I asked Duncan to talk a little about his choice of setting and genre.

There’s monsters in them thar hills, and the weird west was never wilder. ‘The Dead Spend No Gold’ is a fine tale to be spun around some High Sierra campfire—as long as you don’t mind lying awake all night, wondering what that sound was off there in the trees…

To me, there is no better place for mythical creatures and legendary lands to exist than in the early American West. It was as mysterious as any fabled past, as haunting as any medieval time, as exotic as any foreign land.

And yet the West is also accessible and understandable, at least to a generation who grew up learning its tropes and stereotypes. The myth of the West is so different from the reality, that it leaves plenty of room for new interpretations.

For the early settlers, the West was unknown and unknowable. What was known wasn’t always right. What was right wasn’t always known. Anything could happen.  It was the edge of the universe — “Here there be Dragons.” Or, more accurately, here there be “Golden Bears” or “Wampus Cats” or “Hodags” or “Lava Bears.”

Sounds like a great place for astonishing things to happen, right? Horrible things. Bewildering beauties and unforeseen terrors. For the pioneers, who really didn’t know what lay behind that next mountain, or over that desert, or on the other side of that river, the future was yet to be written.

In researching “Led to the Slaughter,” I found the most useful sources to be the pioneer diaries of women. Men tended to talk about miles crossed, or animals shot, and other such practical things. It’s true that for the most part, women were also mostly circumspect about their difficulties. They were a stoic breed, not given to complaining. But there were differences in the way men and women saw the journey. Men saw opportunities and riches and new beginnings. Women went along on the journey most often only because the menfolk insisted.

One of the more telling differences between men and women’s perspective was how they spoke of the Native Americans. Men would spin tales of near escapes from savages, the constant fear of attack, the looming menace. They would brag about how brave they were to dare to confront such dangers.

Women, on the other hand, would talk meeting with Indians as opportunities to trade for fresh meat or materials from the natives. These encounters often saved the pioneers, or at the least, made their journey less uncomfortable. Women often looked forward to the encounters, men dreaded them.

The early wagon trains were often led astray by con men, who led them off the beaten track by promising “short-cuts” and “easy passage.” Because no one knew the truth. Those who were inclined to make maps made those maps for their own purposes. It was a “Wild” West because the rules of civilization didn’t apply, except those rules you brought along.

The title of “Led to the Slaughter” comes from the unfortunate tendency of the Donner Party to accept such shortcuts as real, and to be led into disaster. 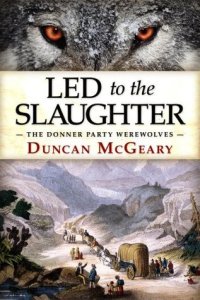 It didn’t much for the rules to break down.

In the real west, terrible things happened, most often man against man. In “The Dead Spend No Gold,” it’s the white man’s massacre of the native tribes that leads to a confrontation with the more primordial figure of Bigfoot — who isn’t so easily driven off.

Not much of a stretch to take the real events and turn them into horror, with mythical creatures such as werewolves and Bigfoot as metaphors for greed and hatred.

The West was primal and the human response also needed to be primal to survive. It’s amazing, actually, that for the most part the pioneers held to the proprieties. Woman would keep a fresh clean dress for Sundays, while their everyday dress turned black from the dust of travel. Men would be formal and courtly and most often law-abiding.

But in extremis, the West stripped away such niceties, and it was down to simple survival. And the horror genre is as primal as it gets. Man against nature, man against beast, man against…the Other.

Stories of the West have expanded far beyond the actual truth — which leaves enough gaps in the story for new myths to be created, blended in, and not seem out of place. Just as fantasy often has a medieval setting or feel because it lends itself to that genre, I believe the Old West lends itself to the weird, the primal, the unknown and the new.

There is always that out-of-the way rocky arid tract of land, where man is overwhelmed by nature, where the winds howl in the night and the wolves prey on their livestock and the unseen Indians are always over the horizon. Where anything, even the inexplicable and unexplainable, can happen.

The West is wide-open.

THE DEAD SPEND NO GOLD: Bigfoot and the California Gold Rush.

LED TO THE SLAUGHTER: The Donner Party Werewolves.

Previous Post: « Frontier Partisan Cinema — SOA: The End of the Ride
Next Post: The Frontier Art of Michael Haynes »