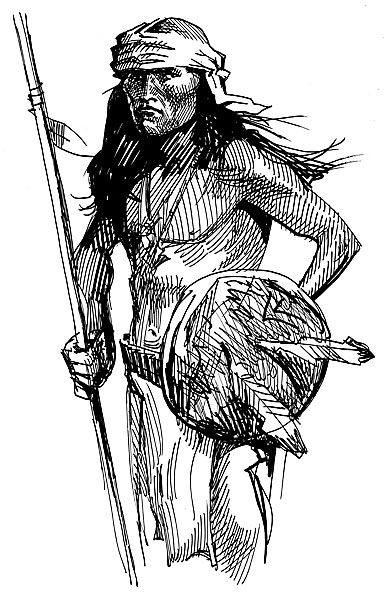 No photograph of Cochise exists. Bob Boze Bell of True West Magazine captured the alpha wolf of the Chircahuas based on contemporary descriptions.

Captain Frederick  W. Coleman noted with some amazement that other Chiricahua Apache chiefs were “mortally afraid of Cochise … when he is around they are exceedingly small fry.”

What kind of badass do you have to be to scare the crap out of a bunch of Chiricahua Apaches?

Cochise made his bones as a war leader by stealing horses and killing Mexicans wholesale. It was the traditional Chiricahua Apache business and he was exceptionally good at it. He had the Apache virtues of hardihood, ferocity, cunning and skill at arms in spades. He reportedly had no peer with a lance. He was a leader of extraordinary charisma and forcefulness; the notoriously fractious Apaches followed him without question — and not just Chircahuas; Western Apaches allied with him, too.

During the 1850s, Cochise generally avoided contact with the Americans who were increasingly infiltrating his southeastern Arizona homeland. He may have done a bit of trading — some Americans, at least, being not averse to dealing arms and whiskey in exchange for Mexican booty.

Then, in 1861, a belligerent junior officer, Lt. George Bascom, accused Cochise of kidnapping the son of a rancher named John Ward. Cochise wasn’t guilty and offered to help retrieve the boy (who would become the scout Mickey Free). Bascom called the chief a liar and tried to detain him at Apache Pass.

In what became legendary as the Cut-the-Tent episode (see an excellent True West Magazine Classic Gunfight description here),  Cochise escaped from Bascom’s clutches. However, several of his relatives were taken captive. Cochise promptly snapped up some white hostages to exchange, but negotiations broke down; Cochise killed his hostages and Bascom hanged Cochise’s brother and several others.

For the next twelve years, Cochise was at war with the United States, turning the border regions of Arizona and New Mexico into a slaughterhouse.

A certain nobility has always attached itself to Cochise. He had a regal appearance — tall, slim and athletic — and he had a reputation for truthfulness and good judgment. Romanticism has tended to sanitize the more “Apache” aspects of his nature. The man who terrorized two Mexican states and two U.S. Territories for decades and struck mortal fear into his own ferocious people was no kind of Chiricahua saint. He was a killer and a torturer who made his living raiding more peacable people. And he was prone to drunken binges on native tiswin beer. He roughed up his wives; the youngest one gave it back with spirit, twice biting his hand down to the bone.

Thinking of him as an Indian patriot seems to oversell his virtues. He was not a Tecumseh. He was a badass barbarian chieftain — nothing more and nothing less. As such, he was one of the most successful guerilla chieftains in the history of frontier partisan warfare. He struck hard and fast and then slipped away into the rugged fastness of his strongholds in the Dragoons or the Chiricahua Mountains. His esteemed biographer Edwin Sweeney has demonstrated that he spent a good three years of his war with the U.S. primarily in the sanctuary of northern Mexico.

However, it seems that Cochise did not have quite the tactical genius of the Nedhni chief Juh or the Chihenne Victorio. Those raiders skillfully avoided casualties (until Victorio’s luck ran out in Mexico). Cochise, fighting a war of revenge, took casualties. Highly aggressive, he led from the front and seems to have been wounded several times. He could be whipped. Two officers in particular — Lieutenant William Henry Winters and Captain Reuben Bernard — delivered stinging defeats to the Chiricahua chief, doggedly pursuing him into his sanctuaries, seizing plunder and inflicting losses the small population of Chiricahua could ill afford.

“Cochise had never faced American adversaries like the (dogged), Apache-wise Bernard and Winters who, guided by the consummate scout Merijildo Grijalva, were more than capable of following him over the roughest country.”

Merijildo Grijalva was a Mexican who had been kidnapped by Cochise’s people in 1849. He lived among the Chokkonen band for a decade before wearying of the life and drifting back to Western life. He made his living as a scout and interpreter. Had he been an Anglo, he’d probably be legendary.

Cochise remained fond of him — in a uniquely Apache way. When the chief came in to treat with the Americans at Fort Bowie at Apache Pass, he met again the man who had led bluecoats into his strongholds:

Mary Hilda (Merijildo) offered him his hand before he dismounted, but Cochise told him he would not shake hands until he whipped him; so he got down from his horse andf struck him two or three times with his whip and then they had a friendfly embrace and commenced to talk over old times.”

Worn down after more than a decade of constant warfare, realizing that continued strife would mean extermination for his people, Cochise finally made peace. Typically, it was on his terms. He chose his own reservation, right along the Mexican border in his stronghold of old. He chose his own agent — his friend Tom Jeffords, a redoubtable frontiersman who had made his own separate peace with the war leader several years before.

For a couple of years, the Chiricahua remained at peace — with the Americans. They continued to rip Sonora into bloody shreds in periodic raids that Cochise couldn’t be bothered to stop and to which Jeffords made every effort to turn a blind eye.

Cochise died, probably of stomach cancer, in 1874, and was buried in a deep crevasse in the Chiricahua Mountains, in a spot that remains unknown to this day.

The Chiricahuas could not hold on to their reservation; they were moved to the agency at San Carlos to the north, from which the most militant warriors made several outbreaks over the next 12 years.

Geronimo was the most famous of those militants, and his name has eclipsed that of Cochise in the annals of frontier partisan warfare. But Cochise was the true alpha wolf of the Chiricahua, and one of the greatest of the frontier partisans. 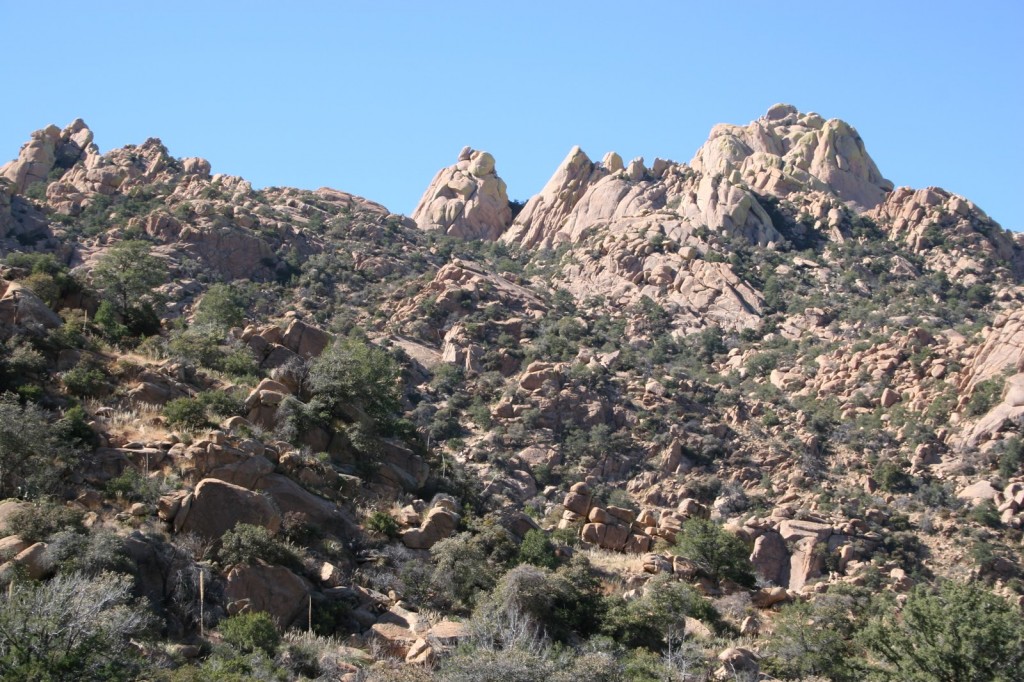 The rugged country of the Cochise Stronghold in the Chircahua Mountains of Southeast Arizona offered sanctuary from which Cochise raided both in the U.S. and in Sonora, Mexico.