Hat tip to Floyd Leithauser for scouting up this piece of news: Winchester has released a commemorative edition to mark the 150th anniversary of the iconic .40-40 lever action Model 1873 “The Gun that Won the West.”

150 years ago, the revered Winchester Model 1873 began its historic run. Similar to the earlier Model 1866 “Yellow Boy,” the ’73 traded the brass alloy receiver for iron, adding strength and other improvements such as a dust cover that covered the loading/ejection port. Fortunately for Winchester, the release of the ’73 coincided with unbridled expansion into the untamed region of the American West, which caused demand for these reliable rifles to soar. During the course of the next few decades, the Model 1873 was used by cowboys, Native Americans, ranchers, farmers, pioneers, law enforcement agents and outlaws alike. It was in their hands that the legend of the Model 1973 was forged.

History at the OK Corral, serves up good work depicting some of the most deadly — yet little known — moments in the history of the Western frontier. In this case, the brutal death of George
Drouillard at the hands 0f Blackfoot warriors.

Drouillard, depicted below by the great frontier artist Michael Haynes, was the designated hunter for the Corps of Discovery — a vital asset for Captains Lewis & Clark. 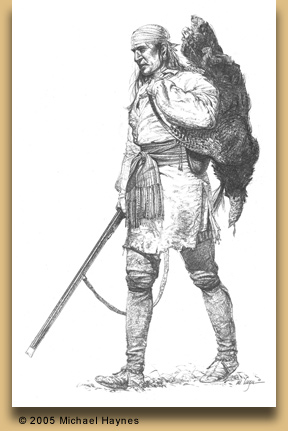 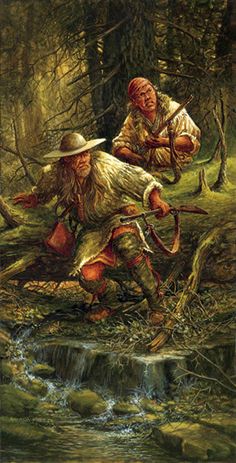 Like John Colter, Drouillard chose to stay in the West after the Expedition’s return. He was a real-deal badass with a fatal degree of confidence in his own abilities. He was going to go where the beaver were, and no Blackfoot was going to stop him. It didn’t end well, but Drouillard was game to the end. 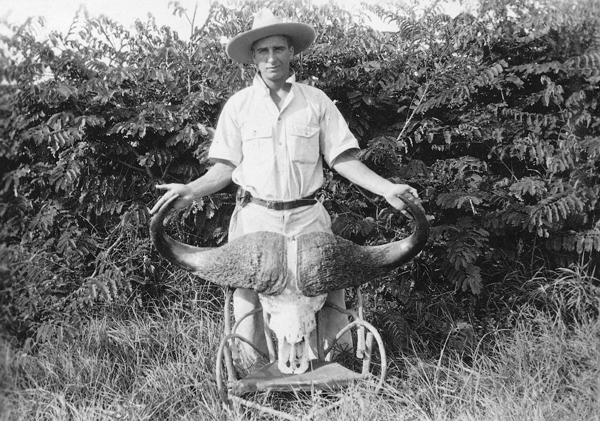 Stumbled across a doco on the Tsavo maneaters that is remarkable because it features the great safari guide and hunter Bunny Allen. If you know Bartle Bull’s Anton Rider stories, you’ll recognize an homage to Allen, who was of English gypsy descent. As Safari Press notes:

In the early years he met and hunted with many illustrious hunters such as Denys Finch Hatton and Karen Blixen. Bunny made his reputation as an elephant hunter and as an outfitter to Hollywood’s stars and moguls like John Ford. Bunny was the professional hunter hired for such movies as Mogambo, starring Ava Gardner, Clark Gable, and Grace Kelly.

Allen was quite the ladies man, and took full advantage of the tendency of glamorous women to seek to bag the professional hunter on their safaris. Dangerous liaisons…

The doco has a lot of remarkable footage from East Africa at the height of the imperial era, and does a good job of depicting the crisis on the railroad line that inspired the movie The Ghost & The Darkness.

…The Tsavo commemorates two of the most feared man-eating lions of the 19th century, who terrorised the builders of the Kenya to Uganda railway in 1898.

Limited to a run of 12, each rifle bears its unique series number in gold on the floor plate, along with detailed engraving of the infamous pair of maneless lions. Their names – “The Ghost” and “The Darkness” – are inscribed on the Tsavo’s EAW swing-off scope rings, and the identity of their eventual nemesis – J. H. Patterson – is set into the bolt handle, along with their reported number of their victims (135).

The engraving has just the right touch of morbid… 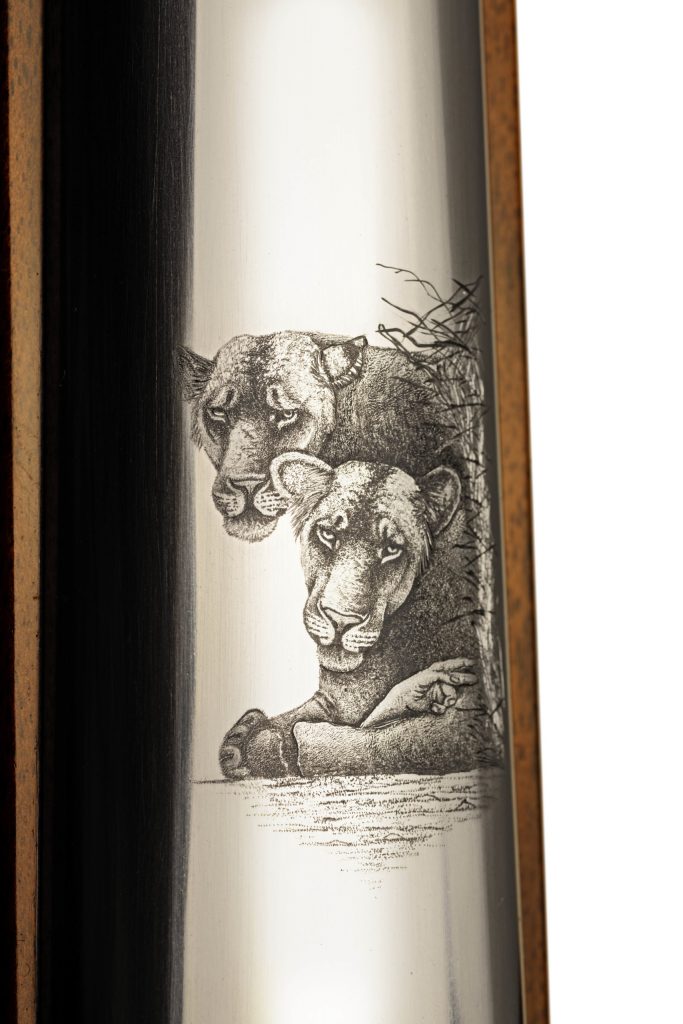 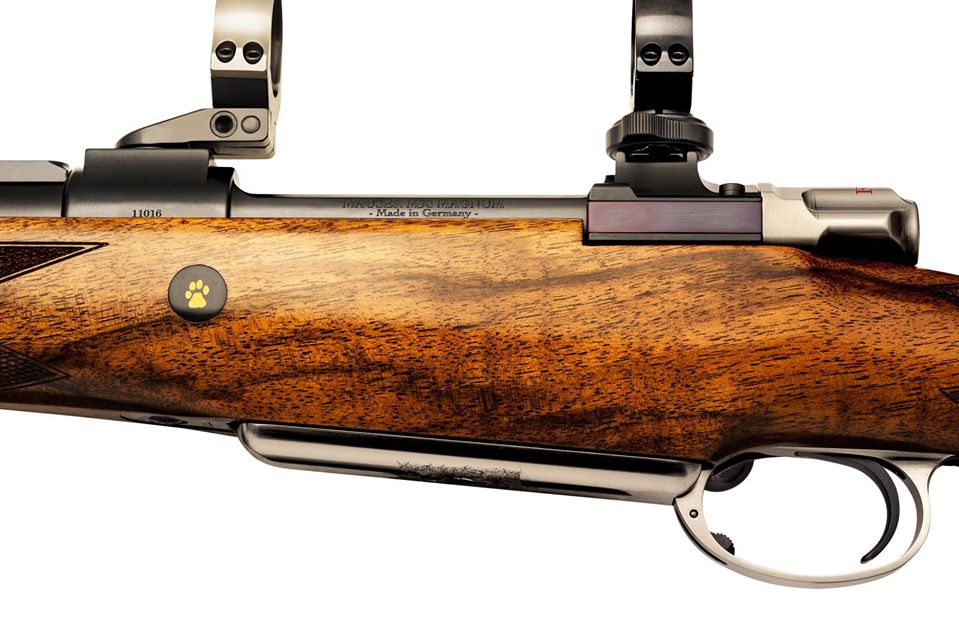 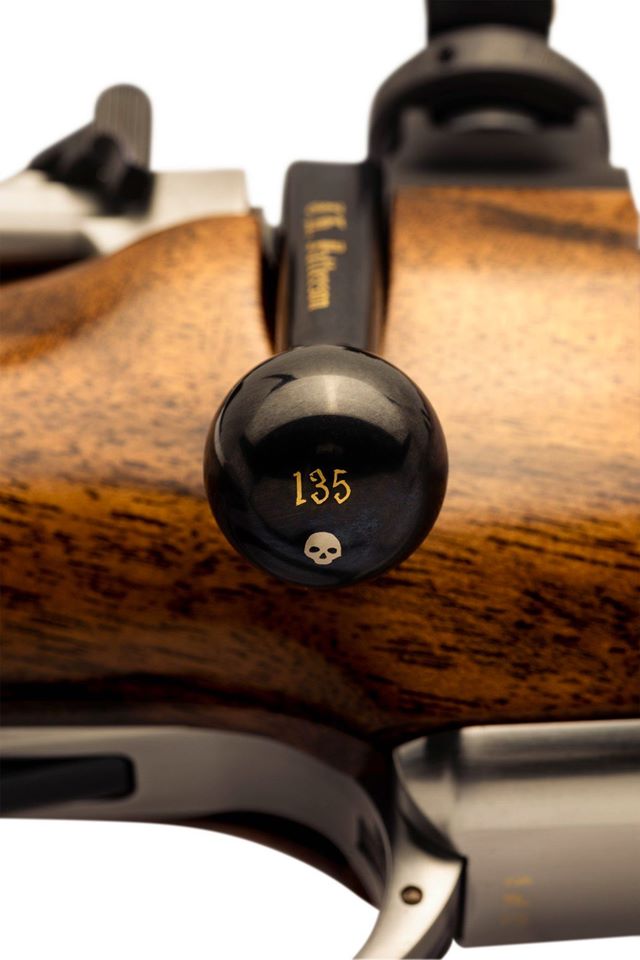 Speaking of dangerous liaisons, readers may remember that the slayer of the Tsavo lions, John Henry Patterson, was implicated in dark scandal involving a married woman and the death of her husband while out with Patterson on safari in the Northern Frontier District of Kenya. That incident was likely an inspiration for Ernest Hemingway’s short story The Short, Happy Life of Francis Macomber.

Patterson’s life after Tsavo was quite the tale…