I can’t believe the release of the fourth and final Anton Rider yarn slipped past me this fall. My only excuse is that it took such a looooong time to get here. I posted on the “imminent” release of We’ll Meet Again in 2014. Seriously.

The publishing world is as dysfunctional as any other aspect of our decadent civilization. More so.

But never mind that — it’s on its way, safely ordered from Paulina Springs Books: 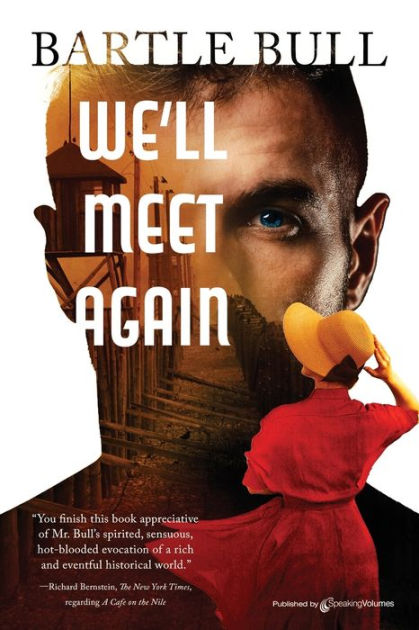 Since it’s been so damn long, I guess I ought to explain why this is a thing, since many of you may not know about Bartle Bull’s cracking African adventure yarns. Bull is a historian of  the classic African safari — he wrote a giant, profusely illustrated non-fiction tome Safari: A Chronicle of Adventure, which is a permanent fixture on my coffee table. His novels featuring gypsy-raised hunter Anton Rider — The White Rhino Hotel; A Café on the Nile; The Devil’s Oasis — start at the end of World War I and carry him into World War II. These are unabashed adventure tales — and I love them.

I suspect that the old-fashioned nature of his work made for tough slogging in a current publishing world that, well… let’s just say that an avidly heterosexual white, male professional hunter is not exactly the kind of protagonist the industry currently favors. Which is not to say there isn’t an audience itching to go on safari (or off into a partisan operation) with said avidly heterosexual white, male professional hunter. We’ve been looking at Exhibit A in THAT case over the last several posts.

Anyway, I’m glad Bull got to wrap up his saga in the way he wanted to.

It is 1942, and the American and British armies are landing in North Africa to fight the German army led by General Erwin Rommel. Underground resistance to German occupation is rising across Europe. In Jugoslavia, Communist and royalist resistance movements are fighting both the Germans and each other. American and British agents are parachuting into Jugoslavia from Egypt to assist them.

Anton Rider, the safari hunter featured in Bull’s celebrated novels The White Rhino Hotel, A Café on the Nile and The Devil’s Oasis, is dispatched to Jugoslavia to kill a brutal fascist commander and attack a Nazi concentration camp where Gypsies and others are being murdered. Raised as a boy by Gypsies in England, Anton is injured while parachuting into the mountains of Jugoslavia with an American agent who becomes his mortal enemy.

Meanwhile, Rider’s son is wounded fighting Rommel’s forces in North Africa, and Anton’s beloved wife Gwenn, from whom he is separated, is having an affair in Cairo with a treacherous English officer. There the mysterious dwarf, Olivio Alavedo, is at the center of intrigue and fights to protect his absent friend, Anton Rider.

After romantic and military adventures in Jugoslavia, Anton returns to Egypt, where he confronts his enemies and seeks to recover the lady he loves.

This will fill the nightstand reading bill very nicely as I wait for the release of Jamie MacGillvaray: The Renegade’s Journey.

Bartle Bull was part of the safari documented in the wonderful 1989 film In the Blood, which depicted the initiation into hunting of the 13-year-old son of the filmmaker, and hearkened back to Theodore Roosevelt’s 1909 East Africa safari. Roosevelt’s Holland & Holland rifle was actually used on the 1986 hunt, which was led by the legendary Robin Hurt. The thesis of the film is that hunting is critical to wildlife conservation in Africa — and around the world.

I wore the VHS tape of this thing plumb out when it was released, then got a DVD. It’s now available in decent quality on YouTube.