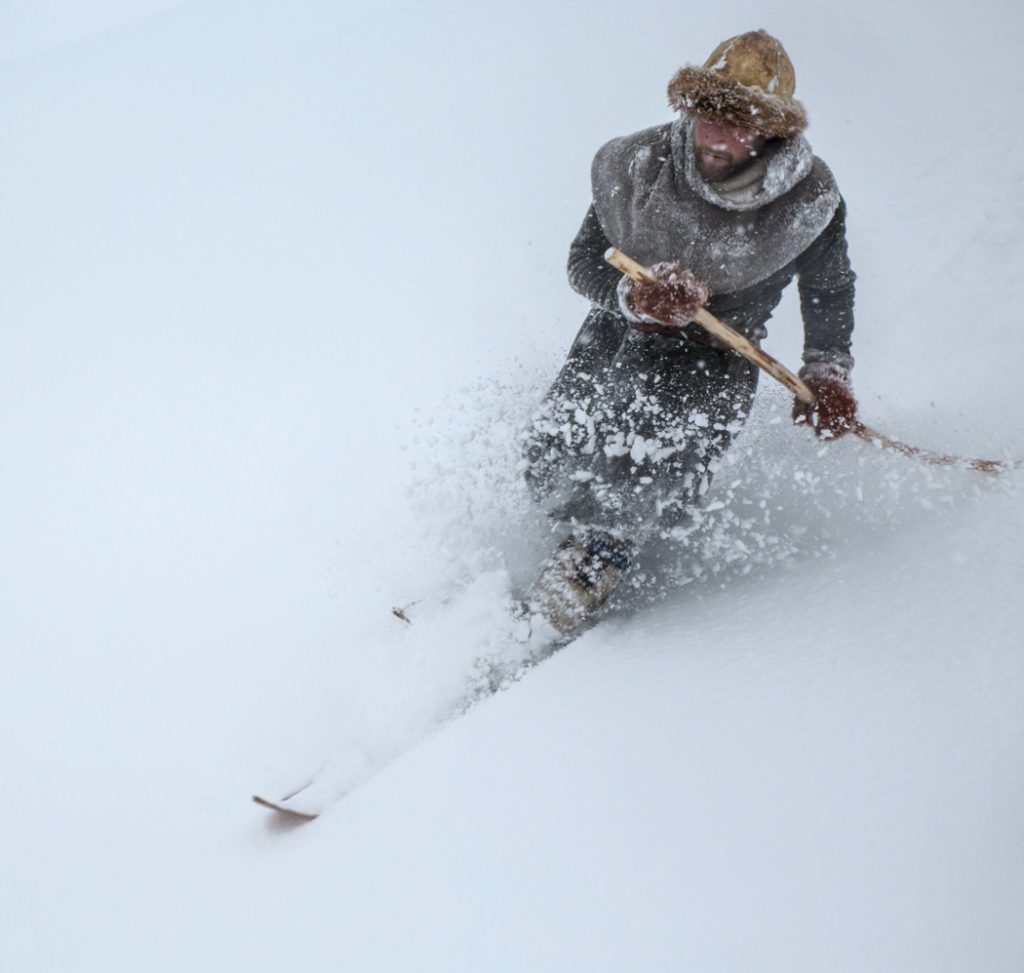 Ceili and Jarod hit the slopes at Hoodoo yesterday for the first alpine skiing expedition of the season. They’re engaged in a tradition older than they know…

Glacier archaeologists have, in recent years, found some remarkable evidence of really Old School skiing. From Secrets of the Ice.

We have found the best-preserved pair of skis from prehistory! Back in 2014, the Secrets of the Ice program found an exceptional pre-Viking ski, 1300 years old, at the Digervarden Ice patch in Norway. The ski was complete, including the binding – one of only two skis from prehistory in this condition. Ever since, we have monitored the ice patch, hoping and praying for the second ski of the pair to melt out. Now it has happened! The new ski is even better preserved than the first one! It is an unbelievable find.

Norse skiing is featured in a movie that somehow slipped past me. From Medieval Histories:

In a major film … telling the dramatic story of the feat of the “Birkebeiner” in 1206 , the actors have had to learn how to race downhill using the ancient technique. The skis in the film have been made by Ole Kristian Ødegård, who has made his own transition from modern racing skis to the old traditional skis made of birch. He considers himself more of an ancient mountaineer than a skier. As part of the contract he has helped to teach the actors, Kristofer Hivju, Jakob Oftebro og Pål Sverre Hagen to walk the talk. A preview may be enjoyed in the official trailer.

The background of the film is the civil war, which raged in Norway in the beginning of the 13th century and the story of the future king of Norway, Haakon Haakonson. His father was Haakon Sverresson (Haakon III), who was leader of the “Birkebeiner” faction in the on-going civil war against the “Baglers”, his mother was Inga of Varteig. Shortly after the death of the king in 1204, she gave birth to a son, named Haakon. This happened at Folkenborg in Eidsberg in the middle of bagler-controlled territory.

In the winter of 1205-06, when the boy was no more than six or seven months old, the Baglers (supported by the Danes) searched for him in order to kill him off. The mother and child fled together with loyal Birkebeiners. However, the party was struck by a blizzard and two famous Birkebeiner skiers, Torstein Skevla and Skjervald Skrukka volunteered to carry the child over the mountains to safety at the court of King Inge in Nidaros (Trondheim) in Trøndelag. 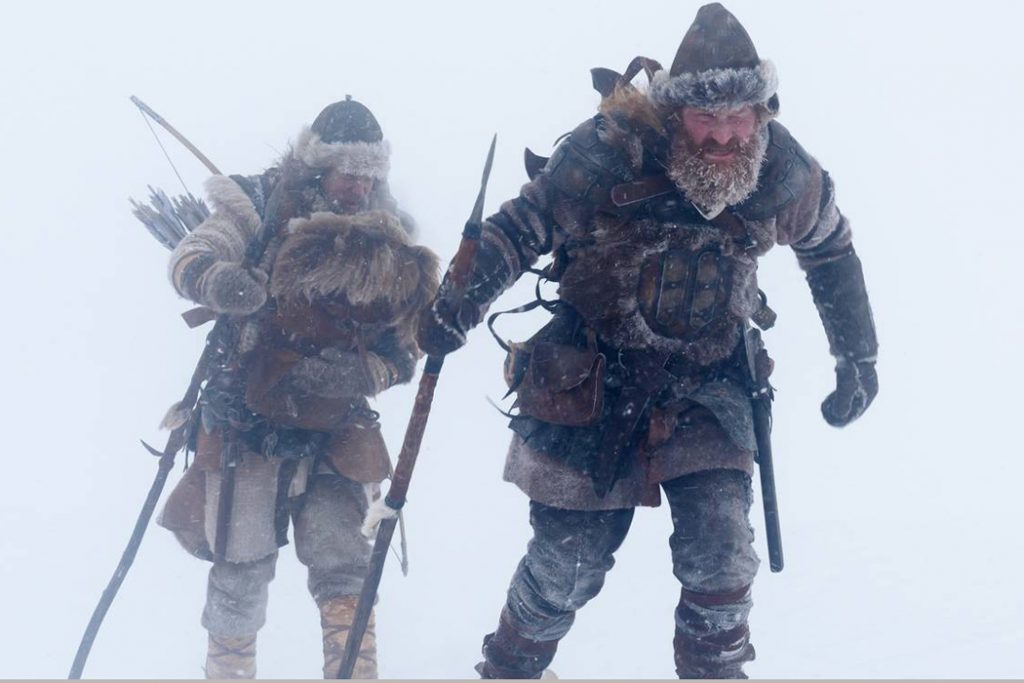 At the age of 13 he was declared king, but at first, the church refused to recognize him and his mother had to prove his parentage through a trial by ordeal in Bergen in 1218, as his parents had not been married. The main source of information concerning Haakon is the Saga of Haakon Haakonsson which was written in the immediate years following his death. Commissioned by his son Magnus, it was written by the Icelandic writer and politician Sturla Þórðarson (nephew of the famous historian Snorri Sturluson).

The history of the civil war and the later rule of Haakon Haakonson has played a significant role in the formation of different factions of Norwegian historians since the 19th century, alternately casting the king as a Norwegian hero or international sell-out.

The whole thing (under the title The Last King) is available for free (with ads) on YouTube but it’s age-restricted so I can’t link to it.

Forting up by “circling the wagons” is an iconic tactic of the Frontier Partisans. Laagering up was virtually a national emblem of the Boers, and adopted by the English colonizers of South Africa and Rhodesia. 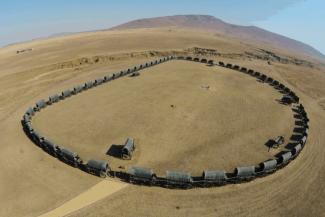 A bronze recreation of the Boer Laager at Blood River. 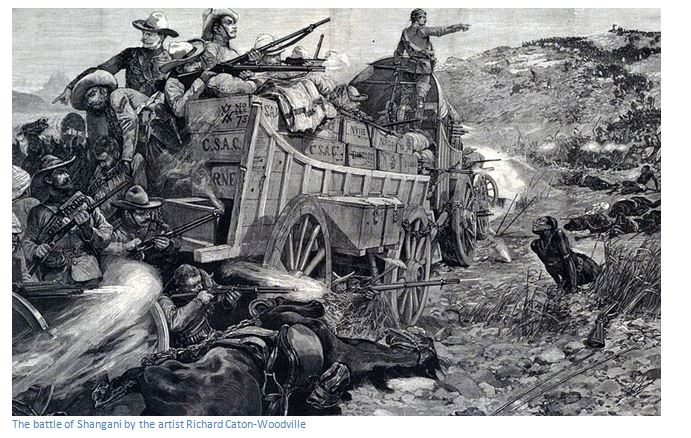 The BSA Company troops forted up to meet the Matabele charge at the Battle of Shangani in the First Matabele War in 1893.

The wagon fort is actually an ancient tactical device. The Chinese deployed war wagons at a very early date, and there are accounts of Celts forting up in wagons in battles against the Romans.

The purpose-built war wagon was deployed most famously by the Hussites in the 15th Century. The tactic was known as the Wagenburg. 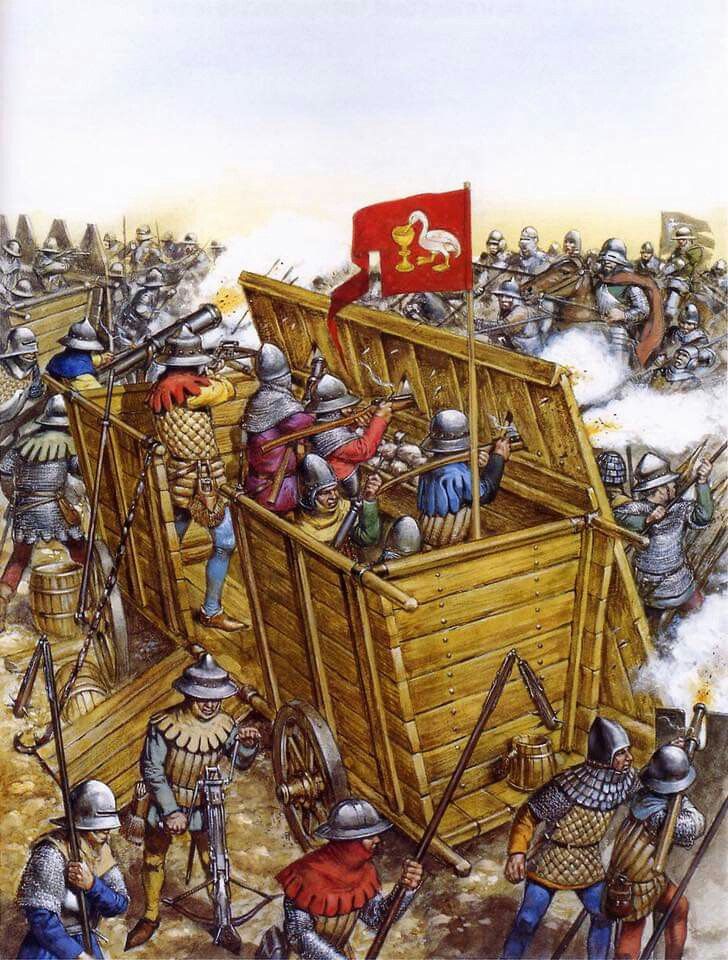 The Hussite Wars started in 1419 as the Catholic Church launched a crusade to suppress a “heresy” that can be viewed as an early precursor to the Protestant Reformation.

The Hussite use of war wagons and the wagenburg tactic was not new… However, it was the innovations that they introduced to this method of warfare that makes them stand out. The Hussites were one of the earliest groups to effectively deploy gunpowder weapons such as handguns and artillery in field battles (gunpowder weapons had been in use in Europe since the 14th century, but were mainly relegated to siege operations).

The Hussites, the majority of whom were townsmen or peasants, were greatly inferior in cavalry compared to their opponents. The Hussites’ first military leader, Jan Zizka (a former captain of King Wenceslaus’s palace guard and later a mercenary), was an excellent soldier and tactician. He recognized that his followers could never withstand the forces mustered against them in a traditional battle due to their inferior numbers, armor, and lack of effective heavy cavalry. Zizka’s solution was to develop the Hussite wagenburg tactic, which allowed his soldiers to withstand the enemy cavalry’s attacks. 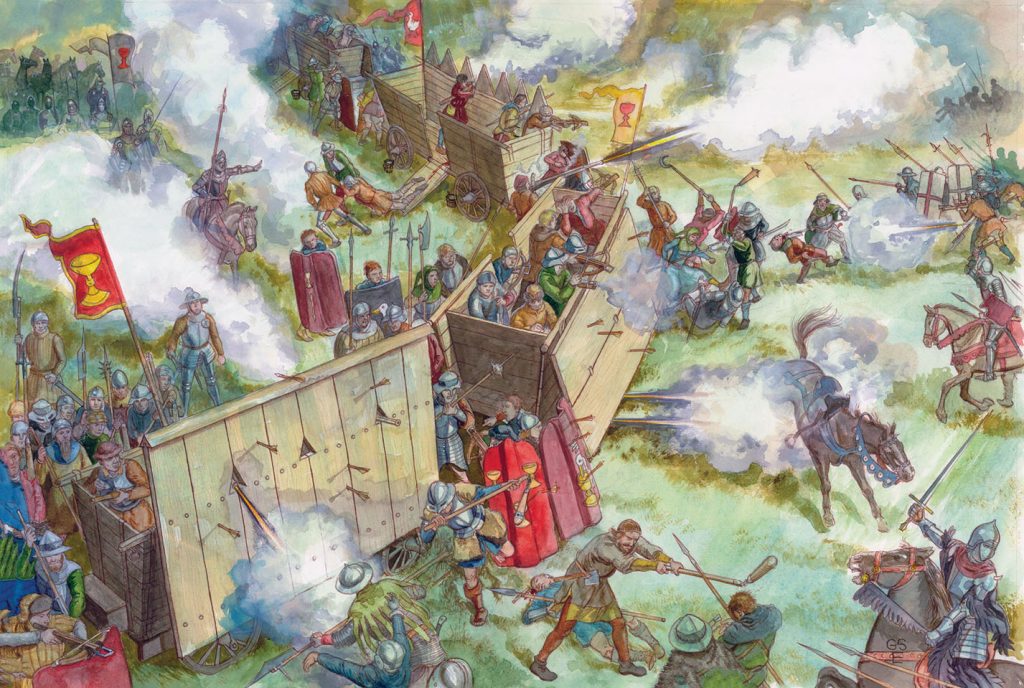 The Hussites’ innovative use of the wagenburg in both defensive and offensive operations saw them defeat larger and better-equipped crusader armies during the five crusades launched against them. The Battle of Sudomer, fought On March 20 1420, was the second major battle of the Hussite Wars. A small force of 400 Hussites and 12 war wagons led by Jan Zizka was attacked by a column of 2,000 heavily armed and armored crusader/imperialist cavalry. The imperial knights were unable to break through the Hussite defensive position and suffered very heavy casualties in the fight until nightfall when Zizka and his small force (which included women and children) made their escape.

Love me a few centuries of Continuity & Persistence.

Now… I need to get back out on the slopes.