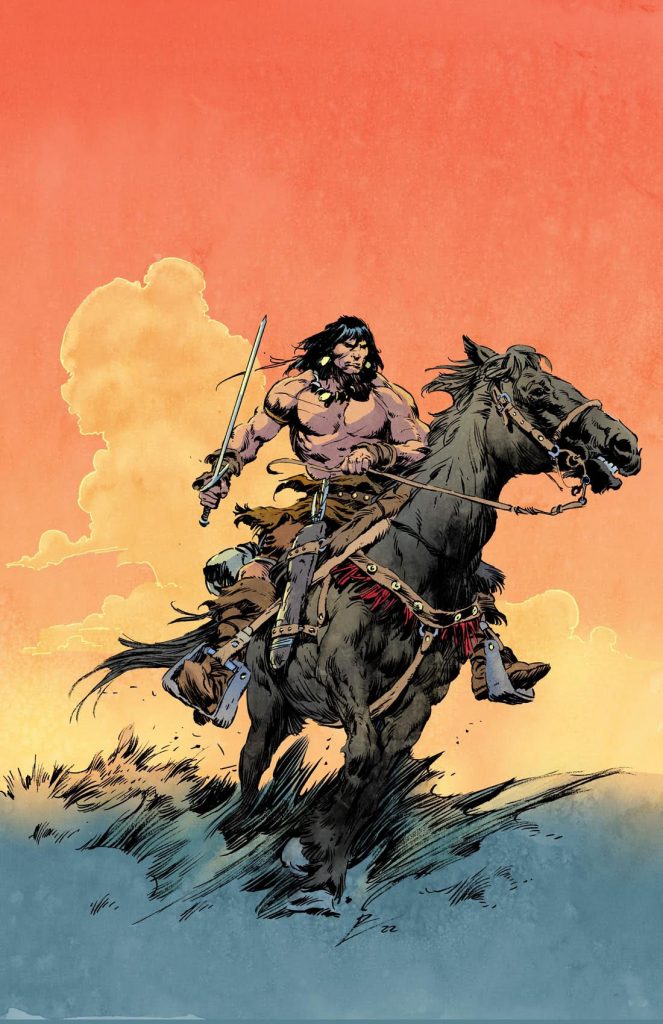 Synchronicity rides the Frontier Partisans trail again. The Regal theater in Bend is hosting a Fathom Events 40th Anniversary screening of John Milius’ Conan The Barbarian on Monday, December 12. As I wrote in a post on the anniversary of the release date last May, the movie premier in 1982 was a moment for my older brother and me. John introduced me to Robert E. Howard, and the impact of that is incalculable.

We had been anticipating the Conan movie for a while. I remember driving into the Sierras in John’s 1969 Volkswagen van, debating the merits of Arnold Schwarzenegger as Conan. The hype was that the Austrian Oak was “born to play Conan.” We, who extolled Howard’s (not Marvel Comics’) Conan, begged to differ. No one ever characterized Arnold as “pantherish,” which is a key adjective in Howard’s description of the Cimmerian.

Not that we weren’t keen to see the movie. Oh, we were. We were there for it on opening night, on the magical Brand Boulevard strip of cinemas in Glendale, California. Knocked back several Killian’s Red ales (yeah, I know) and entered an age undreamed of.

Forty years on, I eagerly await Monday’s venture into that age undreamed of, taking Milius’s version of Conan (which is not Howard) on its own terms. Four of us are going. Craig Rullman is just enough younger than me that he never got to see the movie on the big screen. Cody Rheault and Jarod Gatley were born a looooong time after May 1982 and I don’t think either has ever seen Conan. Yes, this makes me feel old — kinda. But not really. I still love Howard and Howard’s Cimmerian, and Milius and Milus’ Conan. Basil Poledouris’ The Anvil of Crom still stirs the blood.

I figure as long as that holds true, as long as I still ponder the Riddle of Steel, I have not given in to my half century and more of winters…

It so happens that this week also marks the release of S.M. Stirling’s Conan pastiche Blood of the Serpent. I am not such a Howard purist that I cannot enjoy good pastiche — and there is some. John Maddox Roberts, who is a regular visitor to this campfire, wrote several excellent Conan novels for TOR Books back in the 1980s and early ’90s. Paulina Springs has a copy on the way for me. 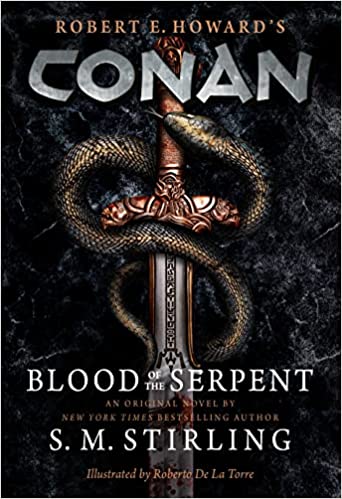 The book is illustrated by Roberto De la Torre, who has quite a passion for Conan. The new yarn rolls up to Red Nails (Howard’s last Conan story before his suicide, and one of my favorites) and Red Nails is included in the volume, which is a nice touch.

As sword for hire for a mercenary troop, Conan finds himself in Sukhmet, a filthy backwater town south of the River Styx considered “the arse-end of Stygia.” Serving in the company known as Zarallo’s Free Companions, he fights alongside soldiers of fortune from Zingara, Koth, Shem, and other lands—a hard-handed band of killers loyal to anyone who pays them well.

In a Sukhmet tavern he encounters one soldier in particular—Valeria of the Red Brotherhood, a veteran of freebooters with whom Conan also sailed, launching raids out of the Barachan Isles on the Western Sea. Valeria’s reputation is that of a deadly swordswoman, a notoriety she quickly proves to be accurate. When she runs afoul of an exiled Stygian noble, however, things take a deadly turn, embroiling them both in the schemes of a priest of the serpent god Set.

The first new Conan novel in more than a decade, Blood of the Serpent leads directly into one of Robert E. Howard’s most famous sword-and-sorcery adventures, “Red Nails.” As a bonus feature that story, as well, is included in this volume. 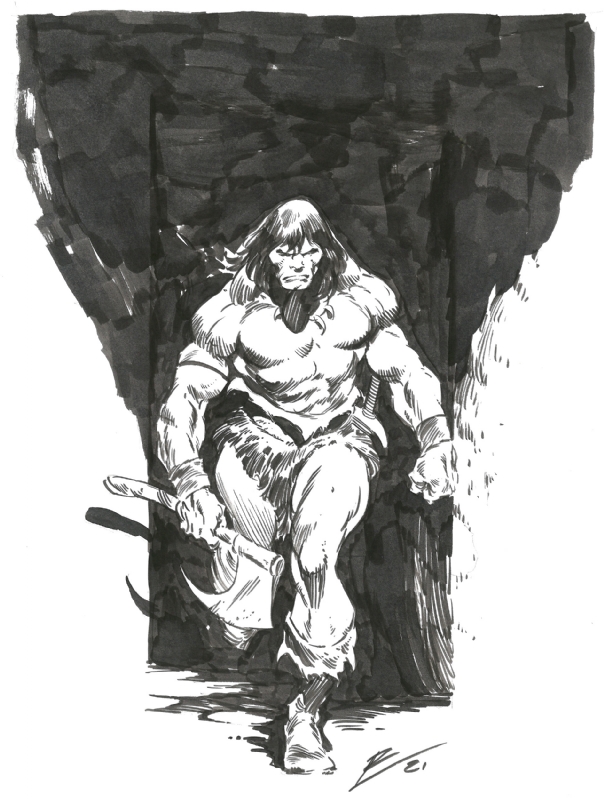 It has to be said that it almost feels like an act of cultural defiance to revel in the unabashedly masculine world of Conan of Cimmeria*. And such defiance is necessary pushback against the creeping dominance of “coward rules and coward customs.” I’m pinching that phrase from an excellent scene in S5/Ep5 of Yellowstone. John Dutton is talking to Rip Wheeler:

“You know, the first Duttons who settled this valley, fightin’s all they knew. It’s how they got here, how they kept the land once they did. But today, it seems like a liability. Cowards rule the world today, Rip, with coward rules and coward customs. To succeed, all you gotta know is how to blame and how to complain. I truly believe it’s the survival of the unfittest these days.”

We can’t just accept that. We have to continue to believe that valor pleases Crom, that the only thing that really matters is that few stood against many. And anybody who doesn’t get that, well… to HELL with you.

*REH also wrote some iconic female characters who anticipated the “badass woman warrior” trope by a good 60-70 years. Belit; Dark Agnes de Chastillon; Red Sonya of Rogatino (not the bastardized “Red Sonja”); and, of course, Valeria of the Red Brotherhood, who figures into Serpent and Red Nails. 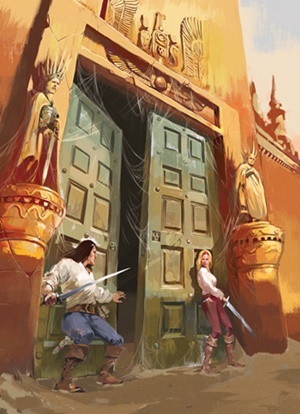 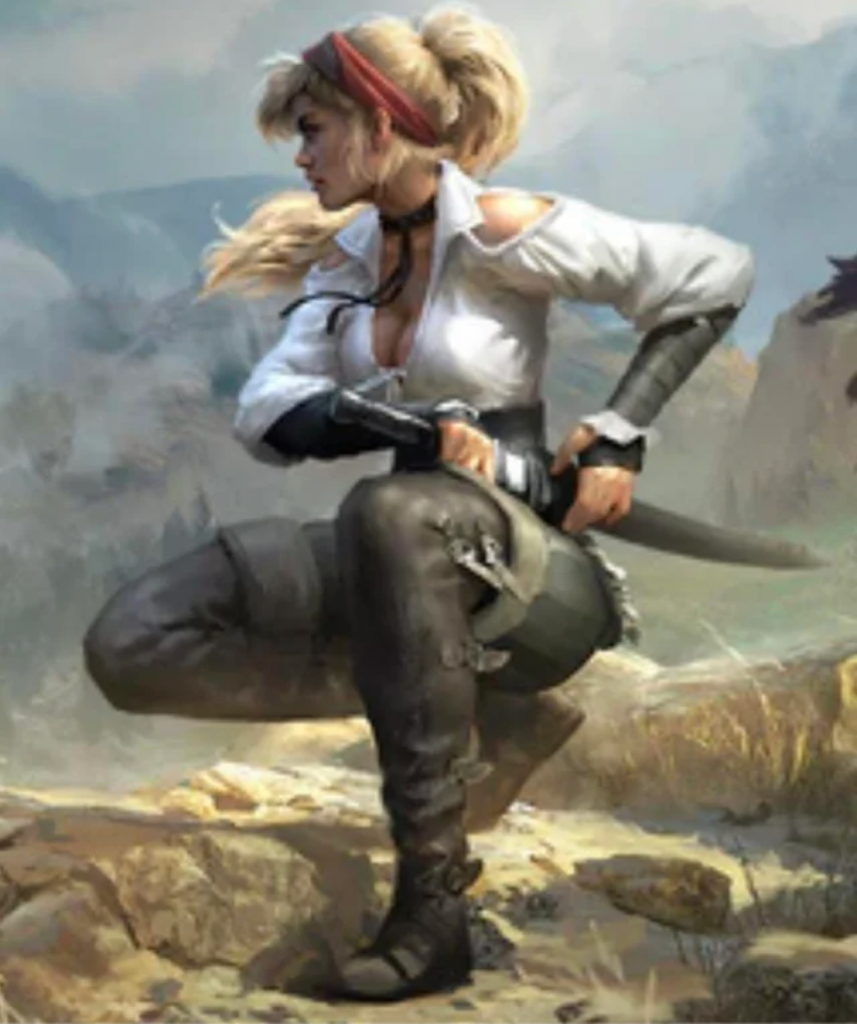