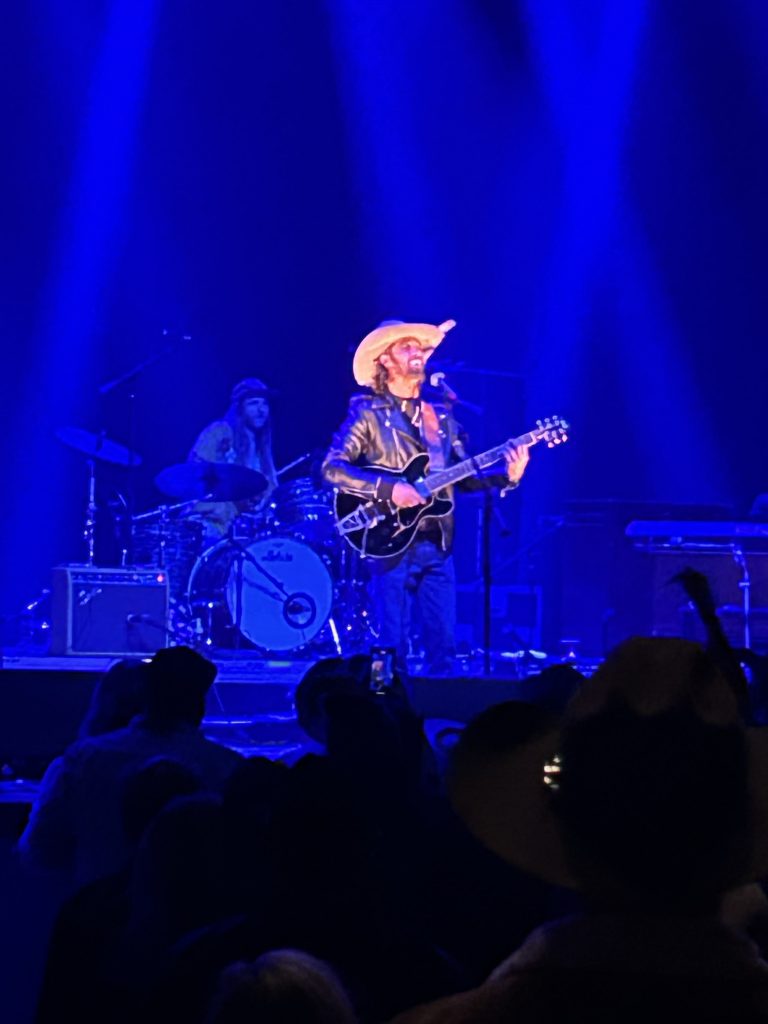 Lady Marilyn and I conducted an epic lightning raid over the weekend into what is right now the Biggest Cowtown in America. Las Vegas. Yep. It’s the National Finals Rodeo, and Vegas rolls out the cowhide carpet like only Vegas can. We weren’t bound for the Rodeo though. Nope. Our mission was to see Corb Lund and Ryan Bingham at the Virgin Atlantic Hotel Theater on Sunday, December 4.

Safe to say that Ryan Bingham is Marilyn’s favorite artist, so when she saw this show come up, and said, “We’re going,” by Crom, we were going. We agreed to drive. That’s a 14-hour haul across half of Oregon and all of Nevada, north to south, in the winter. We’d be doing it twice in four days. Crazy? Kinda. But my flying experience has been nothing but a series of hassles, massive delays, and cancelations for the past three years, so…

And besides, you don’t get to see this from an airplane: 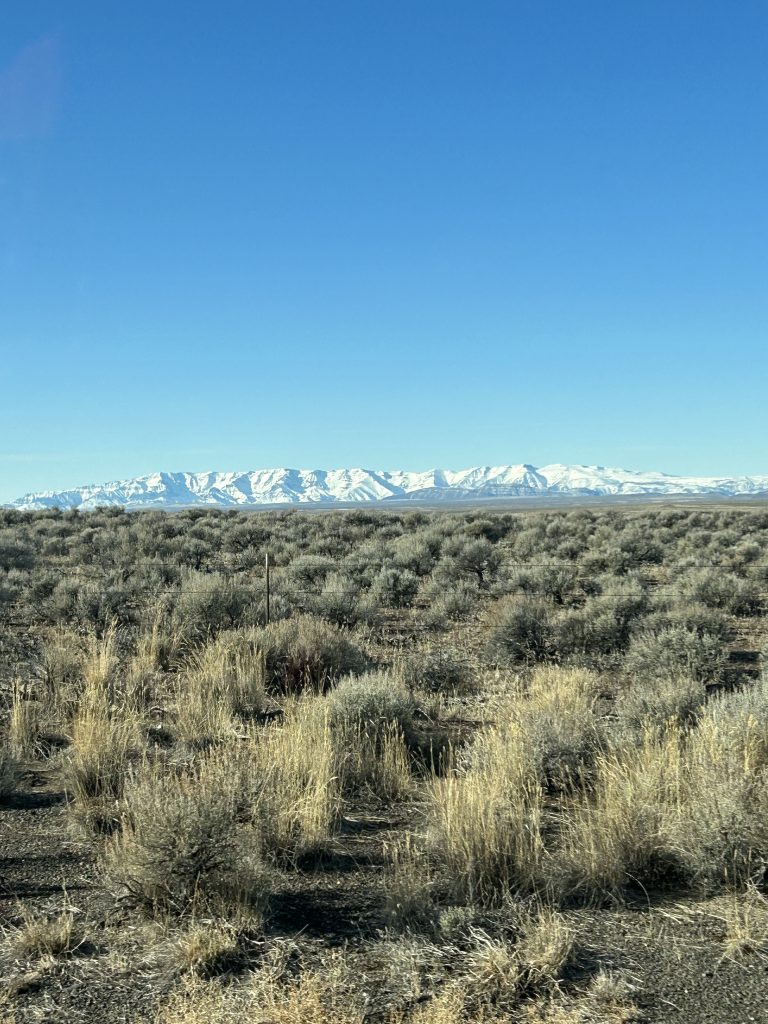 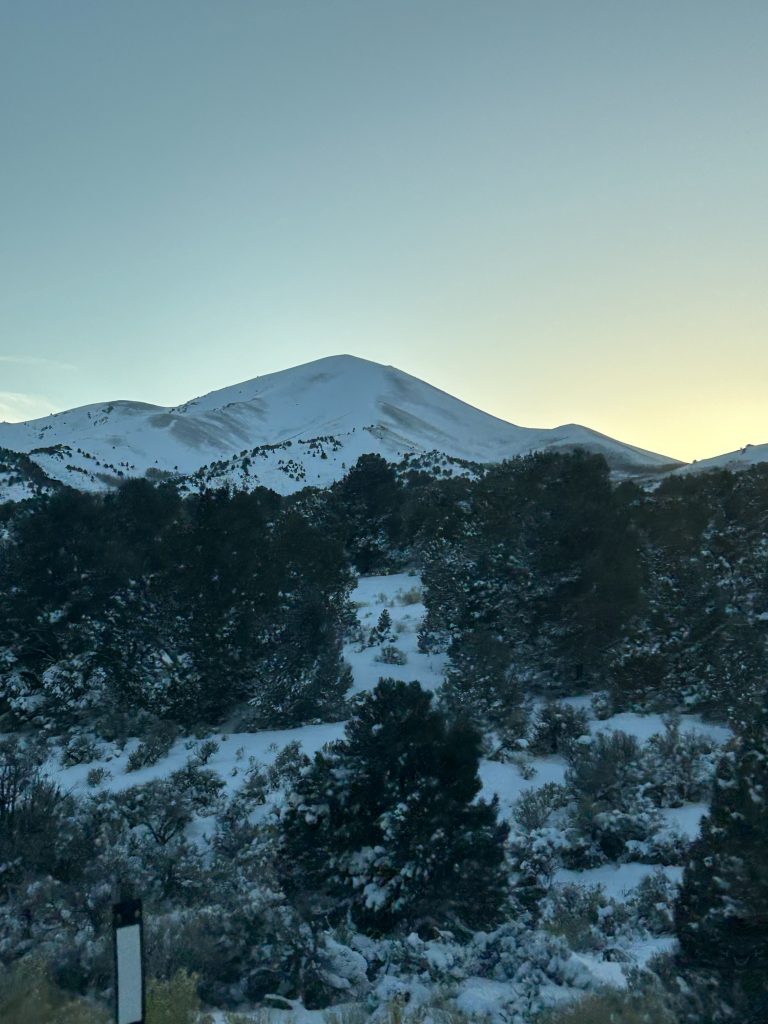 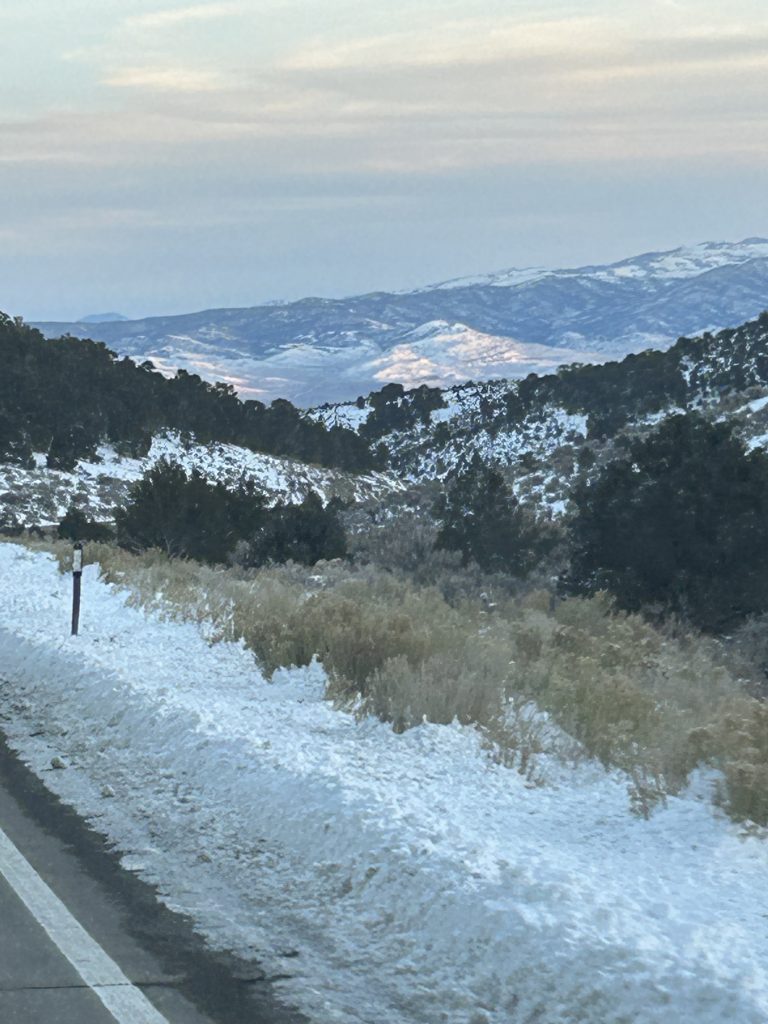 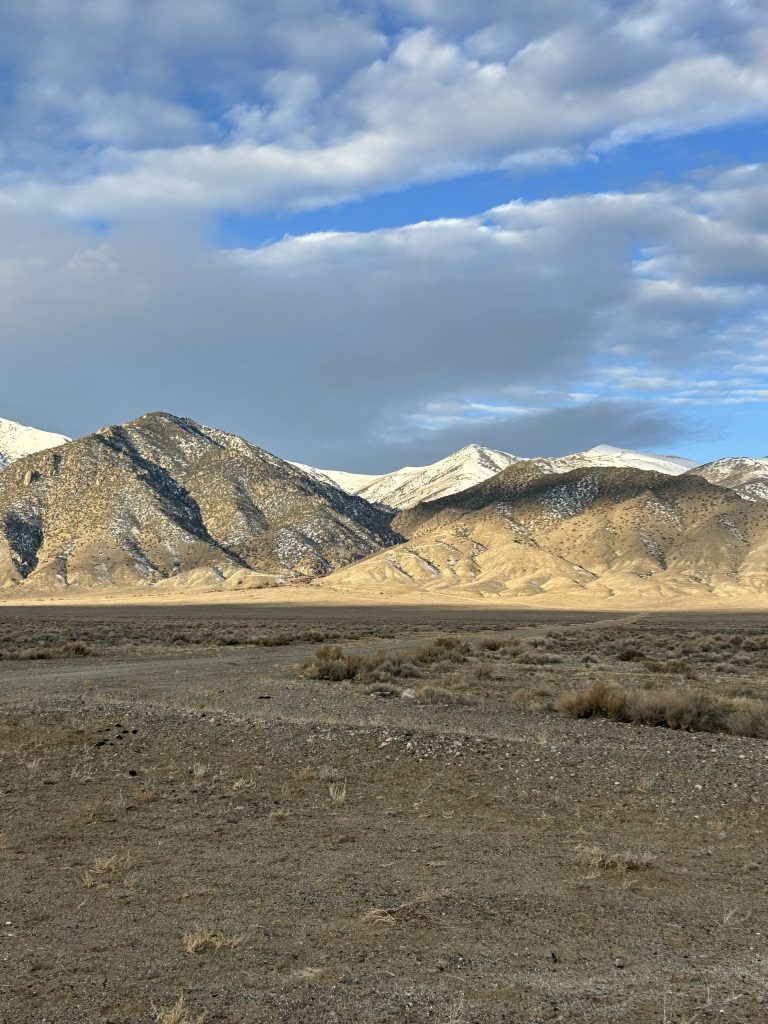 Back in that draw in the mountains bordering Big Smoky Valley is the remains of Ophir — a silver boomtown in the 1860s and again in the 1880s. A 20-stamp mill and a whole little town, now just ghosts…

I don’t have quite the same level of ardor for the Nevada desert that my friend Craig Rullman does; he buckaroo’d across it in his youth, after all. But I’ve spent a bit of time there, exploring and passing through, and it is one of the most unexpectedly beautiful places you can encounter. This is high desert — a lot of the time you’re at 5,000 feet, with passes at 7,500 and peaks that hit 11,000+. It’s not what most folks think it is.

Marilyn being an expert in the travel field — and knowing that we weren’t really after a “Vegas” experience, booked us on Friday night at The Retreat on Charleston Peak, 40 minutes outside of the metropolis. The peak is just short of 12,000 feet, and the retreat is kind of a retro-rustic semi-Germanic joint. 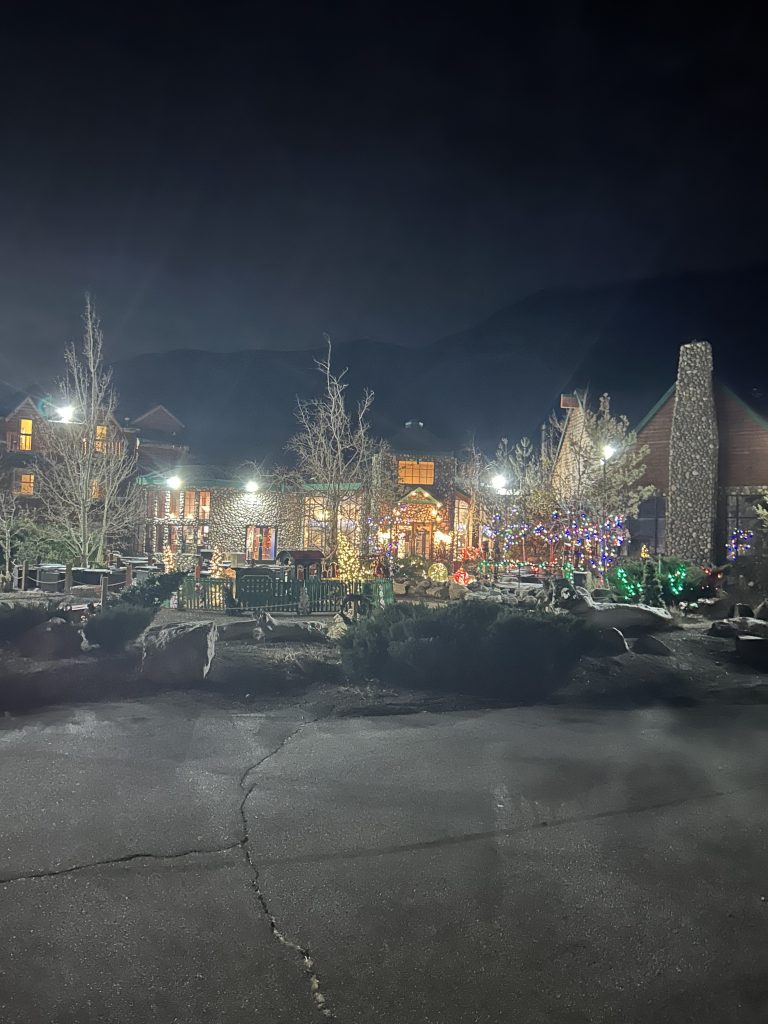 The next morning, we explored the desert ’round. Not what you think of when you think “Vegas.” 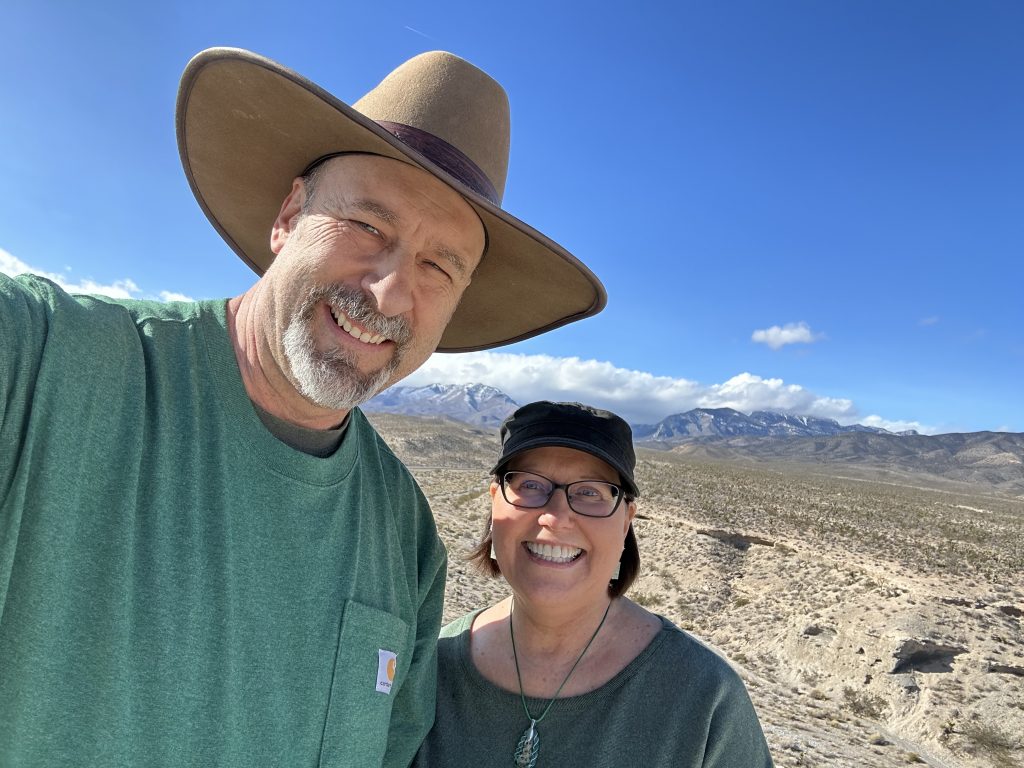 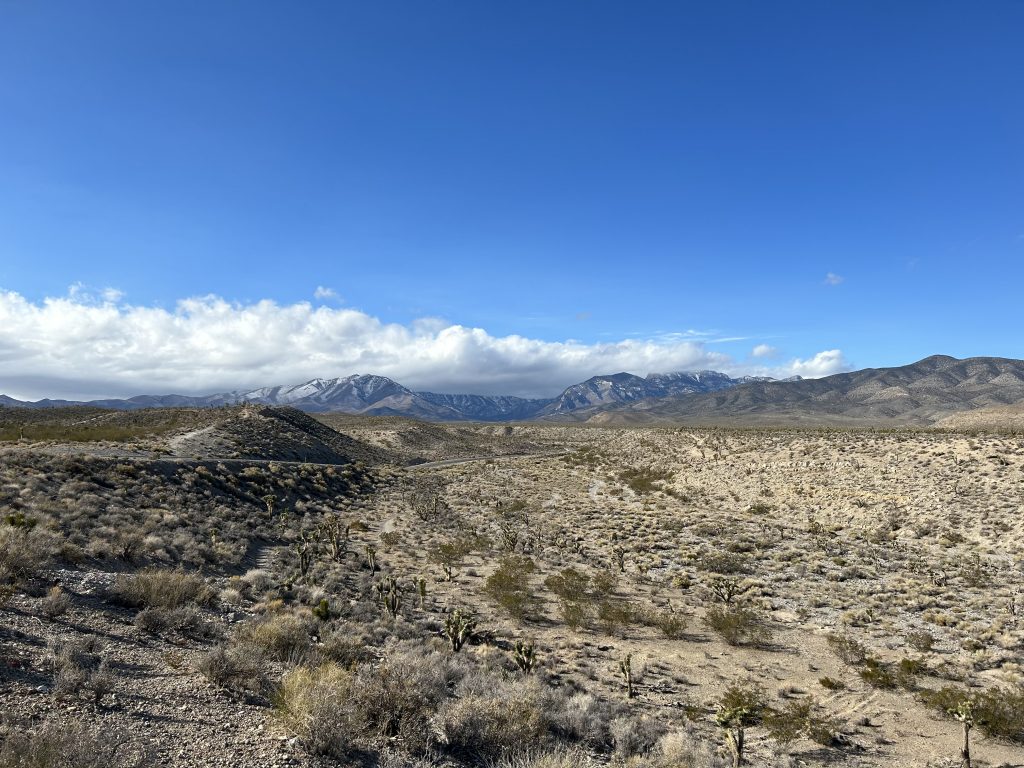 Then we hied off to Red Rock National Conservation Area. 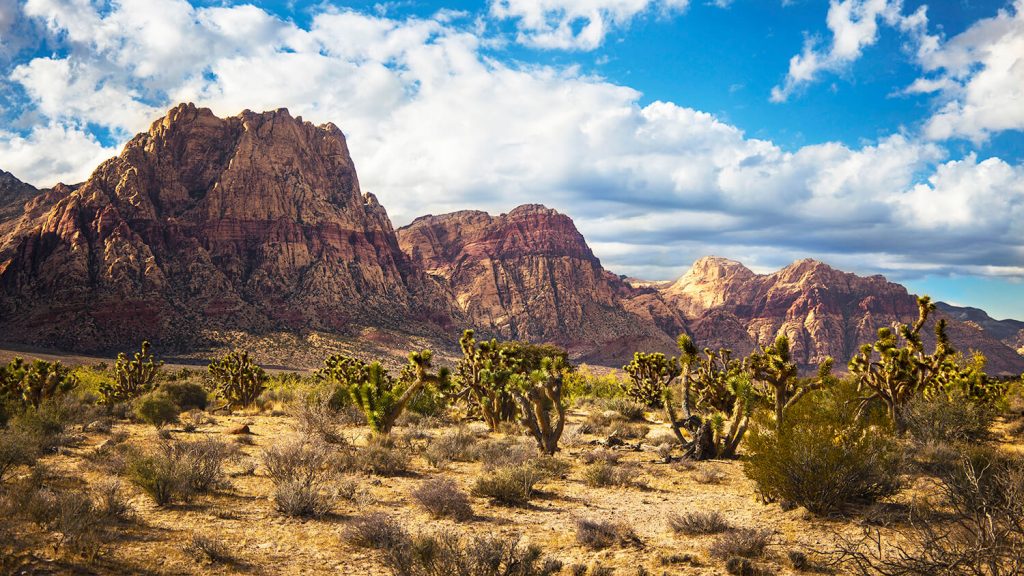 That’s a Travel Nevada shot. Better than mine.

Spectacular place. Too many people around, but that’s what you get when you’ve got a singular natural attraction just a few miles from an international entertainment hub… 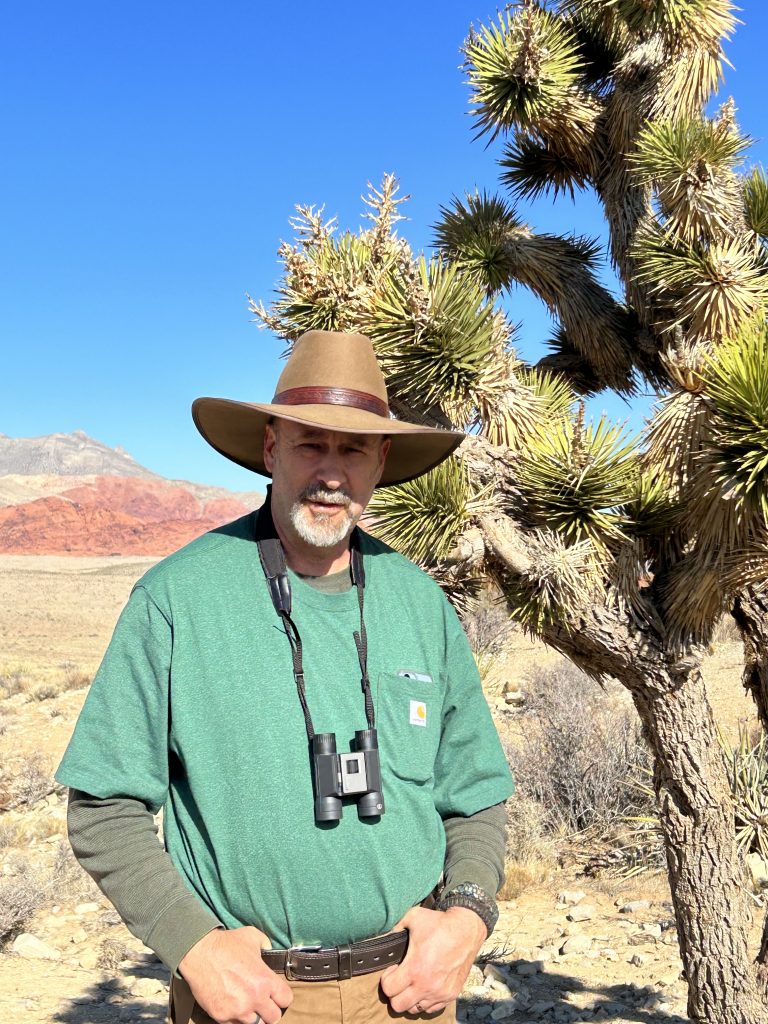 Besides the concert, there was one thing that Marilyn was on a mission to do in Las Vegas: She had to visit the Mandalay Bay Aquarium, which is all about sharks. Marilyn has a thing about sharks. She’s fascinated by them; she can identify all the different types and varieties. She’s “adopted” a hammerhead named Finn that she tracks as it patrols the Caribbean, and she waxes fierce on the subject of environmental and human threats to shark populations. 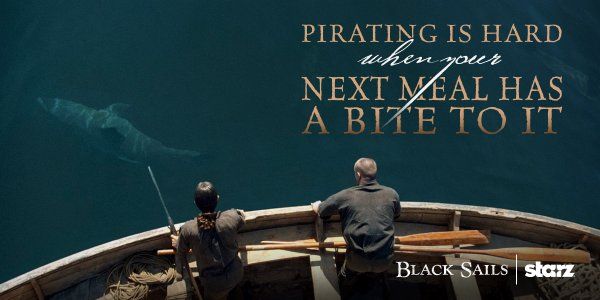 I, too, admire and respect the critters — as one must — but my great joy in the excursion was seeing Marilyn so happy to be surrounded by sharks, up very, very close. The aquarium is, as you’d expect, very well presented, with immersive features that have to have been created by Disney Imagineers. The grand finale puts you in the seafloor wreckage of a wooden ship, complete with groaning timbers. Fun stuff. 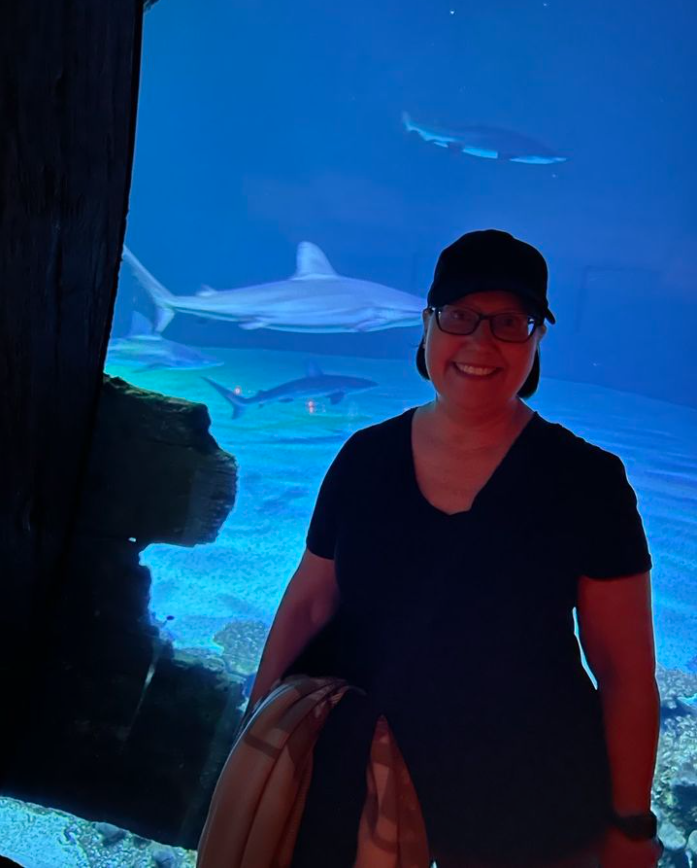 They do these things well in Vegas…

They do concerts well, too. The theater at the Virgin Atlantic Hotel is a 4,600-seat room. Great sound. The crowd was mostly savvy — just a few young buckle bunnies who really only knew Ryan Bingham from Yellowstone. You make allowances though. They looked good. We saw Ryan at the Under The Big Sky Festival in 2021, solo acoustic. This show was with his full band, The Texas Gentlemen — and it rocked, including a thundering cover of The Allman Bros. Whipping Post. That brought back some memories…

The Alberta-based Corb Lund is one of my favorite Western Americana artists, and we missed him twice in 2020-21 due to the plague, so his opening performance was as big a deal for me as the main event. The Hurtin’ Albertans delivered. 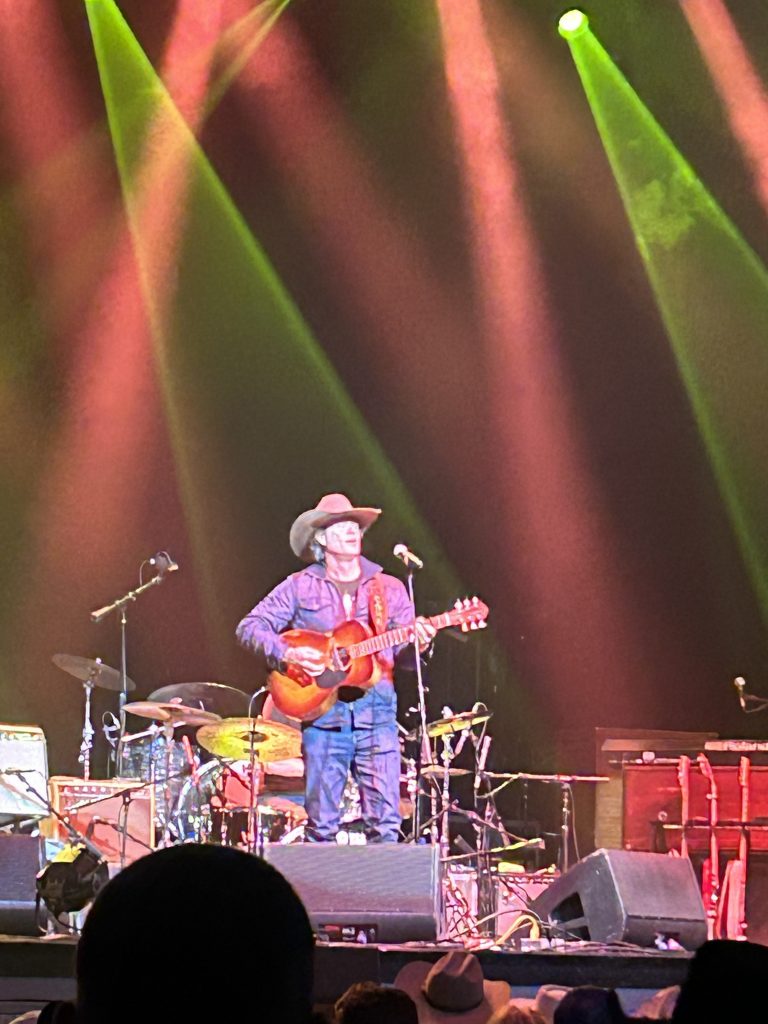 Corb Lund is a history nut, and that figures strongly into his music. If you haven’t delved into his catalogue, you oughta. He’s an x-ringer.

We did not attempt to go to the Rodeo. We’ve seen a lot of rodeos in our day — Sisters Rodeo is the biggest purse of its weekend and consistently brings cowboys and cowgirls who end the year at the NFR. For both of us, rodeo should be outdoors — and our short time was already pretty full-up. But we did get a taste of “The NFR Experience.” NFR week also features a massive Rendezvous for Cowboy Culture known as Cowboy Christmas. The Las Vegas Convention Center — acres and acres of trade fair. Thousands of people, some of whom spend days shopping there. I mean, lookit this thing… 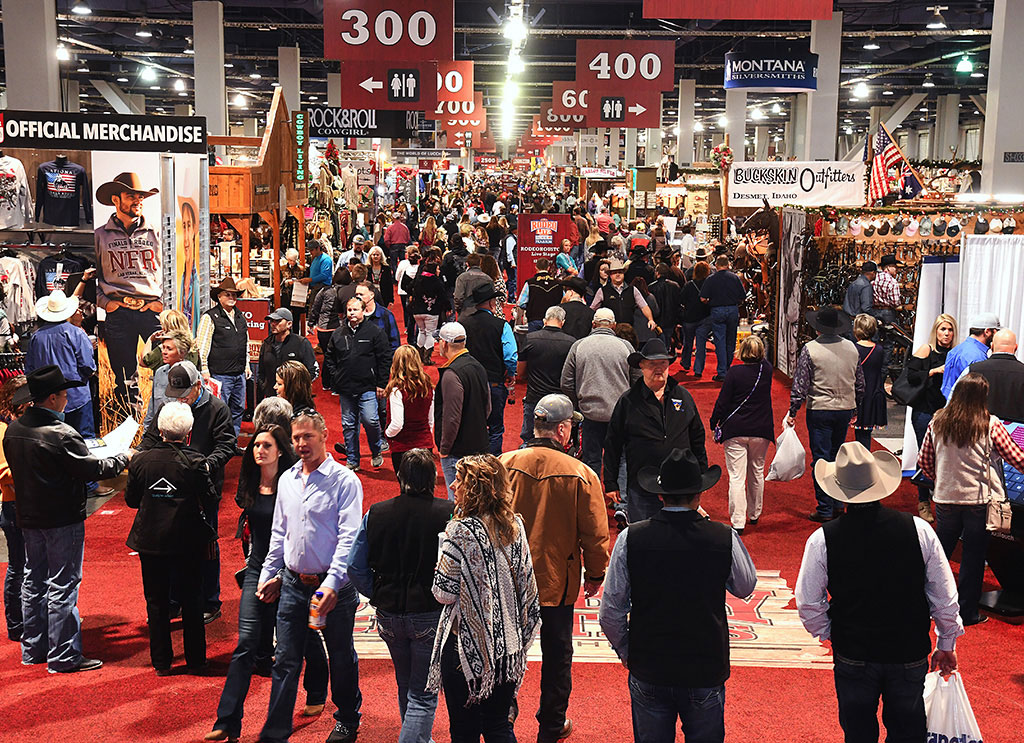 Three floors just like that. To give you an idea of the scale of this thing, there is an entire rodeo arena for the Junior National Finals Rodeo on the second floor. The quality of goods is very high, and believe me, it’s a thing to walk through the King Ranch Saddle Shop. That outfit was a pioneer in promoting high-end Western Lifestyle apparel and other merch, long before the Yellowstone Dutton Ranch was a twinkle in Taylor Sheridan’s eye. And it really is all that. My Cowboy Soap Opera was well-represented. There’s a whole Shop The Scenes Yellowstone Collection, because… of course there is. It’s not all for show, though — there were booths with nothing but ropes; horse trailers that cost as much as a modest house. Camping and hunting gear. Pretty much… everything.

We visited a Central Oregon stalwart, Cate Havstad, at her Range Revolution booth. Cate is a farmer dedicated to regenerative agricultural practices and an activist on regional water issues, and a hatmaker of some repute. Colter Wall wears one of her hats. Range Revolution isn’t just about exquisite leather goods — though they are all that. They are a product of a movement — one that I heartily endorse:

Range Revolution products are built of 100% American cattle hides which are vegetable tanned in the USA. Our hides come from verified regenerative ranches.
Using the EOV (Ecological Outcome Verification) Protocol developed by the Savory Institute, our partner ranches participate in a monitoring program through which Ecological Outcomes data is collected from the land to ensure the holistic management practices result in net-positive ecological outcomes. All Range Revolution leathers are coming from lands that are regenerating soils and increasing biodiversity on rangeland ecosystems.

Ceili profiled her for The Nugget’s special pub called Spirit of Central Oregon a year ago. She’s a hard-working, committed all-around badass. 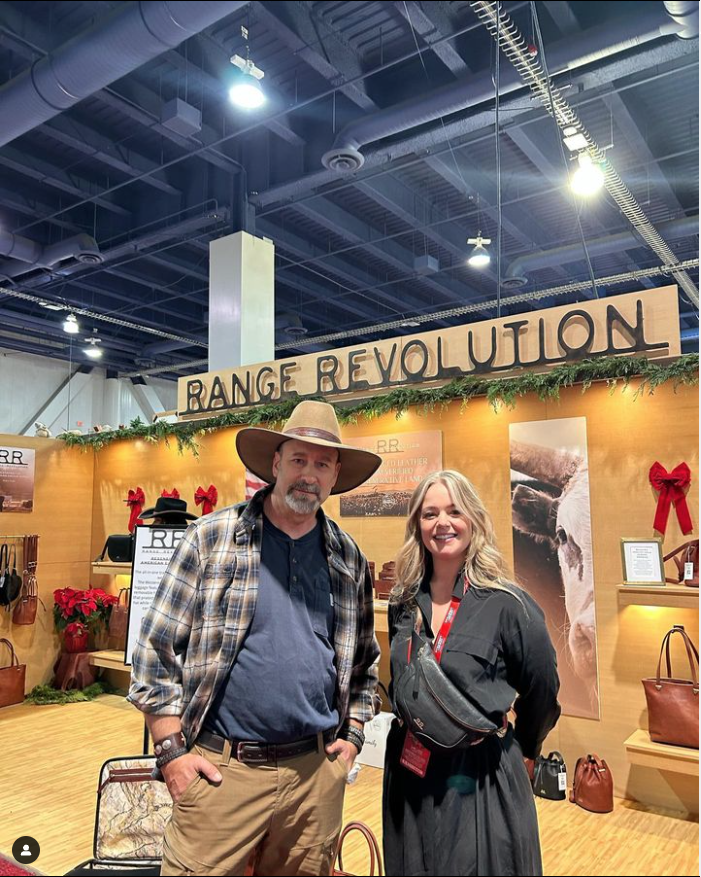 The whole deal was way too much for us, and we bolted pretty quick — with our wallets intact. A Range Revolution bag is, however, a one-of-these-days item for Lady Marilyn, I reckon. 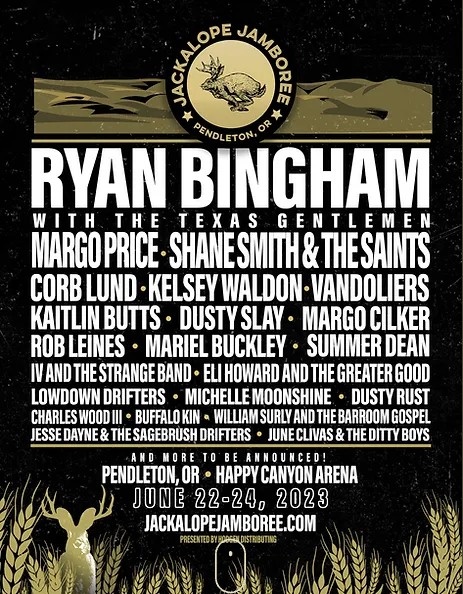 Previous Post: « Working The Trapline — Revolution In Carolina, A Pirate & The Last Of Us
Next Post: For The Glory Of France »