“It is doubtful whether any other firearm in existence has shed so much human blood as this old rifle.” 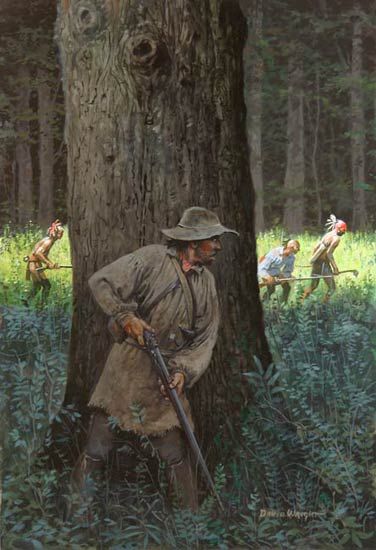 If you ever have a yearning to follow obscure tracks into dense thickets where you might get turned around and lost for days (or weeks, or years) at a time, you could do worse than trying to run down the early history of the frontier flintlock Long Rifle. There are intrepid souls who have obsessively trailed faint sign through the boggy ground of folklore, seeking the solid ground of fact — and hats off to ’em. Because there’s probably no aspect of American material culture more shrouded in folklore than the iconic Long Rifle.

The rifle is the totemic weapon of the American frontiersman, all the way back to the great imperial struggle for the domination of the North American Continent in the French & Indian War. Right? Natty Bumpo, the archetypal Leatherstocking was nicknamed La Longue Carabine, after all…

Well, not exactly. As we’ve noted before, rifles were not all that common on the frontier in the 1750s. White or Indian, a Frontier Partisan of that era was most likely going to be armed with a smoothbore military musket or a trade gun or fowling piece — although there are references to the use of “rifled guns” throughout the war. The frontier rifle culture got going seriously around 1761, right at the end of the F&I War, when a number of smiths established themselves in Pennsylvania  — and then it caught on with revolutionary speed, and spread down the Great Wagon Road through Virginia into the Carolinas.

By the 1770s the rifle was the preferred weapon of the hunters of the trans-Appalachian wilderness — white or red. And they were deployed in combat, as well, though the smoothbore was often a better choice due to the capacity to fire buck-and-ball and to reload quickly.

Rifles with reliable provenance are mighty rare for the period from the 1750s through the 1780s. Much as we’d love to hold Simon Kenton’s rifle, or Daniel Boone’s or Lew Wetzel’s or… they just ain’t there, at least not reliably enough to be definitive. There are several reasons for this. For one thing, frontier rifles got used hard, and were often lost or captured in the course of frontier conflict. It’s unlikely that a rifle from, say, Simon Kenton’s early career (1770s) could have survived.

I recall seeing a picture in some book of a very plain, almost crude, rifle attributed to Kenton, but I haven’t been able to track it down, and have no idea whether it was legit.

Frontier people were practical folk whose focus had to be on surviving today and tomorrow — there wasn’t too much concern about preserving relics of the immediate  past. And when the luxury of caring about history and material culture became viable, the field was wide open for charlatans and con artists… “I’ve got Dan’l Boone’s Tick-licker right here. See? He carved his name right on it…”

The best we can do, in most cases, is recreate a rifle of the type most likely used by one of our great Frontier Partisans. For example, gunsmith Mike Miller built a “Daniel Boone Rifle” based on a description of the big-bore rifle Boone carried into Kentucky on his world-historical long hunt in 1769. But Miller is clear that his build is speculative, based on the types of long arms that were prevalent in the Virginia-North Carolina Backcountry at the time.

Similarly, there is a “Lew Wetzel Rifle” that is based on an extant Reading, Pennsylvania, rifle that matches a description noted in the journal of a minister who is said to have known Wetzel. There’s no direct link, but the rifle represents a “type” that might well have been wielded by that deadly Frontier Partisan.

In this context, the Edward Marshall Rifle is special. It has, for this field, strong provenance, coming down through the Marshall family.

“The aforesaid brothers are the present owners of a rifle that is said to have belonged to Edward Marshall, made at Rothenberg, Germany, and was purchased at the sale of Martin Marshall’s effects.  [Martin being a son of Edward, and with whom William Marshall – who had owned the two rifles and willed them to his nephew William III – lived prior to his death.]  It is a flint-lock, and has the appearance of having seen considerable service though still in good order.  The barrel is three feet one and a half inches in length, and the bore five-eighths of an inch in diameter with six grooves.  It’s total weight is nine and three-fourths pounds, and carries an ounce ball, which is sufficiently large to prove destructive.”

And Marshall avidly sought to be plenty destructive. He is one of those Frontier Partisans who, traumatized by the murder of family members at the hands of Indians, dedicated himself to a dark and bloody trail of vengeance. More on that in a bit…

The rifle has very strong Germanic characteristics — you can see the Jaeger in it.

Eric Kettenburg’s blog provides a very dense study of the rifle. He notes:

This is quite interesting and presents something of a puzzle.  Based upon the description, there can be no doubt that the rifle being described is the same rifle donated to the Bucks County Historical Society by Edward Marshall Ridge in 1922 and illustrated in Shumway as RCA 41.  Another mention of the rifle is found ca. 1900 in a paper presented by W.W.H. Davis before the Bucks County Historical Society based upon the research of Donald Repsher:

“As Marshall could not get a rifle in this country to suit him, he caused a barrel and lock to be purchased in Germany which he had mounted here.  I have seen and handled this famous piece.  On top of the barrel are the following letters, faintly seen:  ‘I.A.D. Rosenberg.’ The rifle is still in the family, and when I saw it, some years ago, the hair trigger was as sensitive to the touch as when the original owner set it to shoot Indians over 150 years ago.  In the flint-box was the identical rammer screw that Marshall used in cleaning it before starting out in search of human game.  It is doubtful whether any other firearm in existence has shed so much human blood as this old rifle.”

Marshall has a helluva story. To kick it off, he was one of the three men the Penn Brothers engaged to conduct The Walking Purchase of August 25, 1737 one of the most notorious land grabs of the colonial era. Here’s the caper, per Encyclopedia Brittanica:

Walking Purchase, (Aug. 25, 1737), land swindle perpetrated by Pennsylvania authorities on the Delaware Indians, who had been the tribe most friendly to William Penn when he founded the colony in the previous century. Colonial authorities claimed to have found a lost treaty, of 1686, ceding a tract of Delaware tribal land between the fork of the Delaware and Lehigh rivers that extended as far as a man could walk in 1-1/2 days — about 40 miles. William Penn’s son Thomas Penn (1702–75), who was proprietor of Pennsylvania in 1737, hired the three fastest walkers in the colony and offered a large prize to the one who could cover the most land. The winner, running on a carefully cleared path, crossed more than twice the land the Delaware had anticipated—causing the tribe to lose about 1,200 square miles (3,100 square km) of their land. At Thomas Penn’s request, members of the Iroquois Confederacy helped enforce this unpopular decision.

Edward Marshall, who was about 22 years old at the time, was the only one of the three runners who made it the full day-and-half, and he covered some 65 miles — a pretty damned impressive ultramarathon in the heat of a Pennsylvania summer. Such a feat puts Edward Marshall in the elite physical class of Frontier Partisans like Kenton, Wetzel or Samuel Brady — all famed for their prowess as runners.

The Walking Purchase remained a grievance for the Lenape 20 years later, when the French & Indian War erupted in the Pennsylvania backcountry. With Braddock’s Defeat in 1755, the frontier was ripped wide open, bleeding under slashing raids by French-allied Indians, including Lenape who burned to avenge the fraud that had pushed so many of them west. Their vengeance fell hard on Edward Marshall.

In spring 1757, a raiding party struck Marshall’s farm in the Poconos in northeast Pennsylvania while he was away cutting timber. His 14-year-old daughter was shot and wounded, and his eight-months-pregnant wife was kidnapped. She didn’t make it far — the raiders, doubtless believing that she couldn’t keep up as they escaped and evaded, killed her within five miles of the Marshall homestead. A year later, Indian raiders killed Marshall’s eldest son. Marshall remarried — to a woman named Elizabeth Weizer, who had also experienced traumatic loss: Her father had been killed by Indian raiders.

When we try to understand the vituperative hatred the frontier folk of Pennsylvania harbored for all Indians — a hatred that bore bitter fruit in the slaughter of innocents as well as warrior vendettas — this kind of soul-searing trauma is where it came from.

It’s tempting to think that Marshall was targeted as a perpetrator of the Walking Purchase rip-off, but I haven’t seen any evidence that that is the case. The Marshalls were just one among many frontier families — white and red — that suffered the agonies and traumas of a brutal war zone. (It’s worth noting that Marshall’s frontier was not in the backcountry of Western Pennsylvania. His hunting grounds were located due north of Philadelphia. Through the French and Indian War and Pontiac’s War in the early 1760s, the frontier zone was not far from the cities of colonial America; for that matter, the Wyoming Valley, scene of terrible combat and slaughter during the American Revolution, is in northeast Pennsylvania).

Marshall became an Indian-killer — not as hardcore, perhaps, as Lewis Wetzel, but plenty deadly. Buck recounts that:

“Edward Marshall is represented by his descendants as rather taciturn, or having very little to say respecting Indian exploits.  One of the daughters of Martin Marshall [Edward’s granddaughter] informed us over thirty years ago [ca. 1840] that her father had said that on one occasion he had pressed him [Edward] to relate his adventures with the Indians.  After musing a few seconds, the only reply was, when he discovered an Indian he would shut one eye and they would not meet again.”

As is often the case with tales of the Frontier Partisans, a forest of folklore has grown up around Marshall’s exploits. A couple of tales are recounted in this video, by a reenactor named Mike Beliveau, who has acquired a beautiful reproduction of the Marshall Rifle built from a kit from the legendary maker Jim Chambers by one Rube Wilson.

Here’s a shooting video. That .58 caliber roundball packs a wallop.

Williams Flintlocks, an outfit that really digs in to the historical record for its reproductions, also makes a rifle patterned after the Edward Marshall Rifle, and it’s a beauty:

It’s just one of the grim features of Frontier Partisan history that such beautiful implements were turned to dark deeds.