We tend to treat the process of voting with a gloss of civic piety, but the true, virile American tradition is willful, rowdy — and often drunk. I am resolved to embrace the antics that are about to ensue in that spirit.

George Washington was a noble man who set important precedents for conduct in office that we could sorely use today. But he wasn’t priggish. He knew that the best way to win the hearts and minds of an electorate is to get them thoroughly soused. 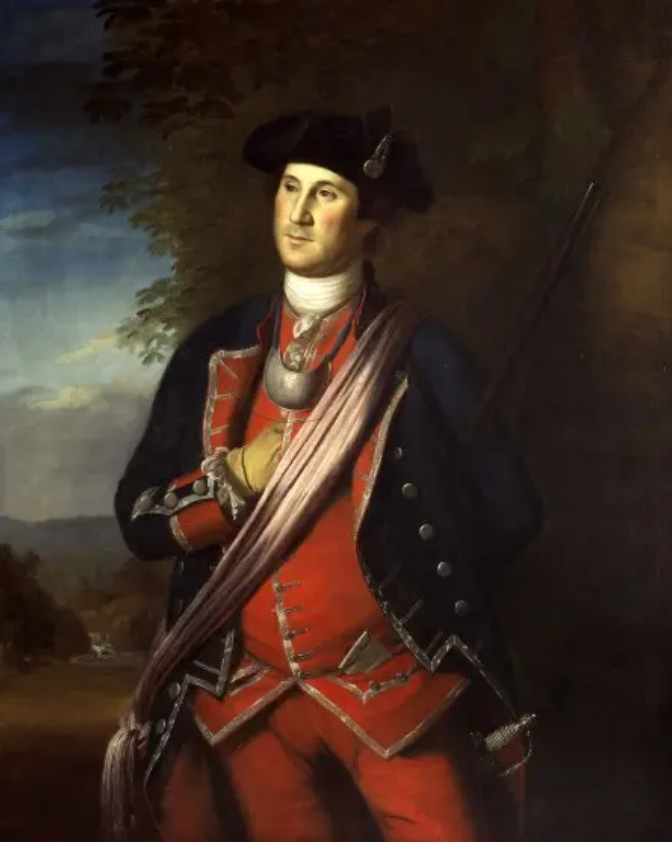 Voters for the Virginia House of Burgesses in 1758 had their choice of candidates. And one of them—a wealthy planter who had made his name in the French and Indian War—gave them their choice of alcohol, too. Candidate George Washington plied potential voters with 47 gallons of beer, 35 gallons of wine, 2 gallons of cider, 3-1/2 pints of brandy and a whopping 70 gallons of rum punch. He carried the election with 310 votes.

Now, it’s fairly self-evident that free-flowing booze and political passions are a volatile mixture. Add in personal/family beefs and you have a powder keg awaiting a spark. The notorious Election Day Fight between Ellison Hatfield and three McCoy boys in Pike County, Kentucky, in 1882 ratcheted the intensity level of the Hatfield-McCoy Feud to a bloody fever pitch. 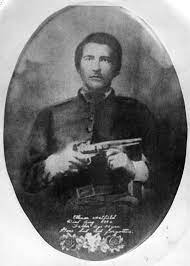 A fuse that wound back through disputes over a $1.75 fiddle and a stray hog to the well-remembered violence of the Civil War days touched off its charge on August 7. In the midst of Pike County election-day festivities, Ellison Hatfield opened the most famous feud in American history by stirring from a drunken slumber, first to insult Tolbert McCoy and then to attack him. Tolbert and his brother drew knives and started stabbing Ellison; a third McCoy brother shot him.

Ellison, fearfully wounded, was borne away. When word reached Anse Hatfield, head of the West Virginia clan and to one contemporary “six feet of devil and 180 pounds of hell,” he and his kin rounded up the three McCoys and held them prisoner. Two days later Ellison died; the Hatfields brought the three boys to within sight of one of the McCoy’s cabins, tied them to papaw bushes, and pumped 50 rifle bullets into them.

Note that the doco has a different take on who started things than American Heritage does. It’s almost like partisans impart spin to a story or something…

Every election cycle, millions and millions of dollars are pumped into an industry tasked with understanding the mind of the American voter. But, as the legendary (fictional) pirate Captain James Flint knew, why a person votes as he (and now she) does is really pretty simple. From Black Sails  we have an election for Captain between James Flint and Benjamin Hornigold, c. 1715…

There was nothing somber or stodgy about Election Day in Early America, no sir. Again, History.com.

In New York, for example, candidates and their supporters rented out taverns and held huge, boozy parties. Often, candidates would take care of transportation, too—and the trips toward the polling place often took on the trappings of a rowdy parade complete with brawls, taunts and delighted onlookers…
As voters moved toward the election green in New York City in 1768, writes historian Nicholas Varga, candidates and their supporters “coaxed and bullied each voter as he strode to the poll.” All this cheering and shouting seemed to add to the festive occasion. After the vote, the celebrations kept on going. “It was customary for everyone present to adjourn to the nearest tavern where the winning candidate was expected to treat all the electors (regardless of how they had voted) to more drink and food,” he writes.

*
Ah, New York. Now THAT’s a city that thrives on its bareknuckle politics. Always has. And New Yorkers know that votes don’t actually have to be won. They can just be… lined up. 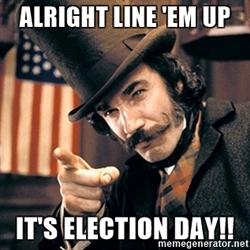 We should all take a moment, along with Bill the Butcher, to acknowledge that:

“In this great country of ours, even hop fiends get the vote.”

Losing an election after strenuous pandering has to be painful. Just ask Virginian Robert Wormley Carter, who lost an election in 1776, despite having, as his father pungently put it…

“Kissed the arse of the people and very seriously accommodated himself to others.”

Aye, demeaning yourself sucks. Demeaning yourself and losing — that sucks even more. And then you have to stand before your supporters, who now think you suck, act like you’re all good with it and praise your opponent and the sacred process and all that?

It occurs to me that the art of the gracious-yet-passive-aggressive concession speech has been neglected of late, what with the current fashion of “election denial.” The finest example of a concession speech — really just a pithy statement — was delivered in 1835 by a legendary Frontier Partisan upon losing a Congressional election in Tennessee:

“You may all go to hell and I will go to Texas.”

That’s David Crockett, y’all. I hear tell there are women in the Great State of Texas who have that proclamation tattooed on their ass. I choose to believe it’s true. 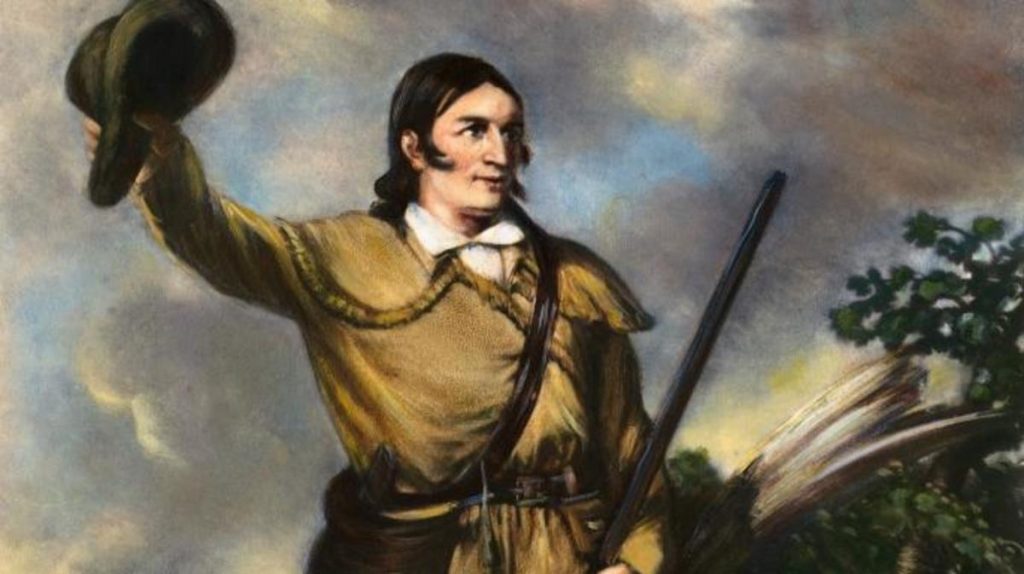 In my state of Oregon, we vote by mail, which takes some of the fizz out of the whole undertaking. I voted three weeks ago. Entirely sober. Nobody pulled a knife. Well, I guess I did. Gotta slice open that envelope, after all. But it’s just not the same as a Bowie in the belly, is it?

And I didn’t even get to opt out of the barrage of political advertising that can no longer have any effect on me at all. Oh, well.

As of Election Eve, statewide turnout in Oregon was 36 percent; Deschutes County was under 50 percent. That’s unusually low for a general election. Pathetic, you might say. DesCo ain’t going to make its usual 72 percent general election turnout — unless our man Bill the Butcher has a massive 11th-hour ballot return lined up for November 8.

It’s a lot of humbug, I tell you. I think Election Day should be a federal holiday, and we should bring back parades to Election Green (or the tavern). Fortify it all with beer, wine, cider and gallons of rum punch. If it was good enough for the Father of Our Country… 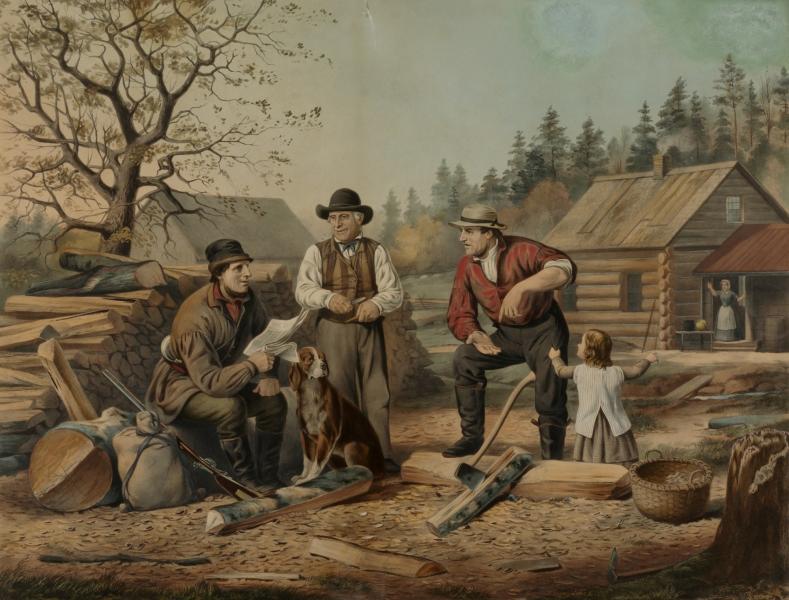 Nathaniel Currier, Arguing the Point (Politics on the American Frontier).